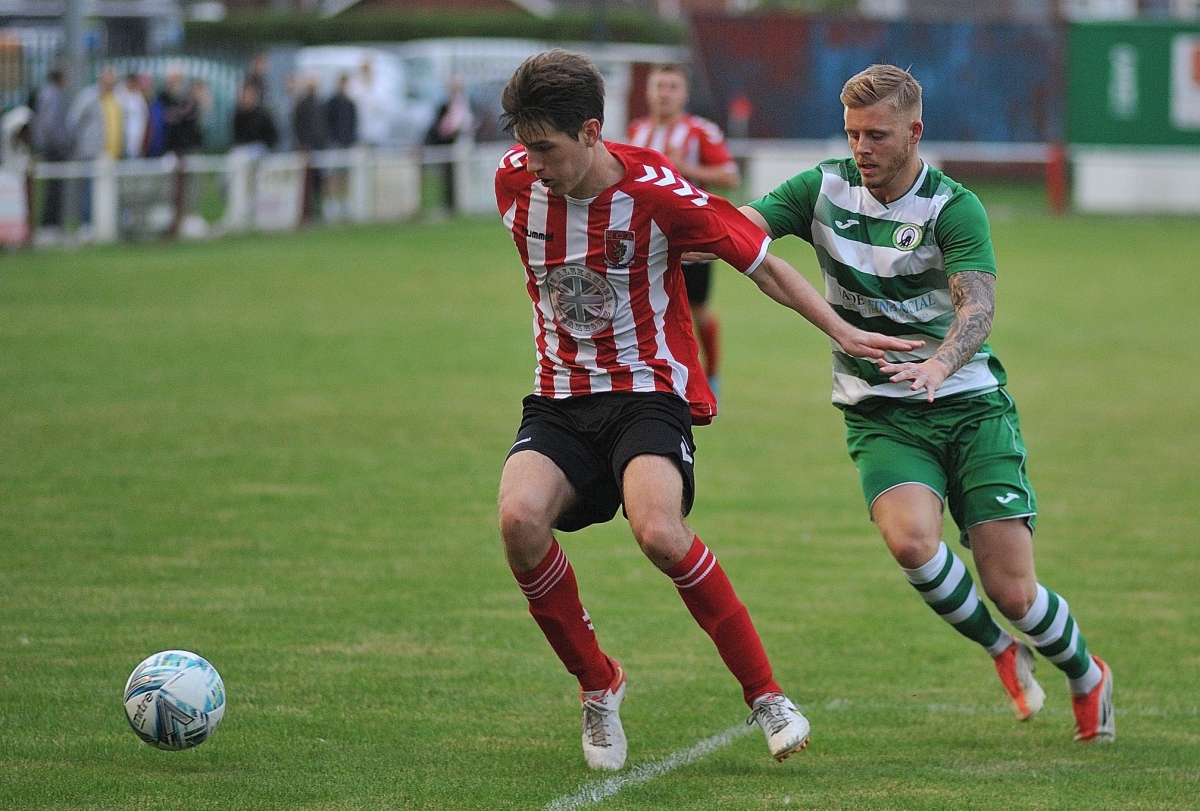 Our first home game of the season and we took on West Allotment Celtic at Sunderland LGV Park in this re-arranged match due to pitch problems at their East Palmerville Sports Pavillion pitch. As always a warm welcome was extended to the Committee, Players and supporters.

After the dramatic equaliser at Carlisle last weekend the team showed a resilience that has become a trademark of Steve Riley’s management style, they never gave up.

Long term injuries ruled Lavery, Tait and Winn out while Hawkins, Morris and Marrs were unavailable due to holidays. The management team brought Antony Lowerson on a dual contract to cover for Marrs in goal.

A warm, humid night greeted the players onto the pitch which was looking immaculate after the recent rain. A week ago it was a yellow patch of turf but the groundsmen have worked their magic in preparing it.

The visitors took advantage of the slope in the first half but it was RCA who created the best chance of the opening minutes when a through ball from Patton split the Allotment defence and Richardson broke clear before blazing his shot over the bar when one on one with Scott in the visitor's goal.

Two minutes later and it was the “Allotment” on the attack. Baltazar made a good run down the right before playing the ball to Thompson who hooked the ball low towards the goal but Lowerson was quickly down to turn the ball round the post for a corner.

Neither team looked to impose themselves on the game and it became a midfield battle with honors’ pretty much even and very few chances created.

The game sparked into life in the 25th minute when RCA were awarded a freekick on the right, Nelson, took the kick finding Davison on the edge of the box, the RCA striker moved the ball onto his right foot and was only denied the opening goal by the foot of Scott, Johnson picked up the rebound but fired over the bar.

Two minutes later and Allotment's defences were breached again with a through ball from Charmey which Johnson collected before smashing the ball against the inside of the post, however the flag was raised for offside.

A 37th minute corner to RCA and Charlton’s cross was cleared to the edge of the box where Richardson picked up the loose ball but his shot was blocked and set up a quick counter attack by West, Higgins breaking down the right before slipping the ball to Baltazar who crossed to the far post where Baxter, with only the keeper to beat, volleyed over from five yards out.

Within minutes Allotment attack again this time the dangerous Thompson picked up a through ball from Forster but his shot from the edge of the box is well over the bar.

A fairly low-key first half came to a close with the sides level at 0-0.

In the opening minute of the second half a long ball forward by Kanda was controlled by Thompson who played a quick one-two with Larmouth but put his shot into the side netting.

Both teams were opting to play long balls forward with both defences looking fairly comfortable.

The next chance fell to Allotment from a free kick on the left - Parkinson crossed into the box where Scott managed to get his head to the ball but couldn’t keep it down and it sailed harmlessly over the bar.

RCA picked up the pace of the game and when Nelson played the ball in to Davison, his deft touch found Johnson inside the box but the quick reactions of J Scott in the Allotment goal diving at the feet of the RCA striker denied him the opening goal.

On the hour mark the visitors had another chance when Baxter picked up a loose ball in midfield, played it forward to Larmouth but his shot was parried round the post by Lowerson.

Lowerson was on hand to make fantastic save minutes later when Larmouth broke through the RCA defence before hitting a low drive.

RCA brought on Moan for Richardson and he almost made an immediate impact, a cross from Lawrence found Moan on the edge of the box and with his first touch he set up Davison inside the box but the normally reliable striker blasted the ball over the bar.

The host’s started to impose themselves in the final 20 minutes and when Lawrence was fouled on the edge of the box Nelson stepped up to send a good ball into the box which Patton headed just over the bar.

Patton had another great chance minutes later when a long clearance from Lowerson bounce favorably for him but he squeezed his shot just wide of the post.

The introduction of Ene for Johnson caused problems for the Allotment defence every time he got the ball he looked to attack them and won a number of free kicks as the resorted to fouling him to stop his runs.

A free kick on the left was taken by Charlton and his cross into the box was met by Jakab but his header went wide.

The final throw of the dice went to the visitors when Larmouth’s shot hit his own player and the rebound to the edge of the box was cleared by Allen with the Allotment player’s claims for a penalty turned down by the referee.