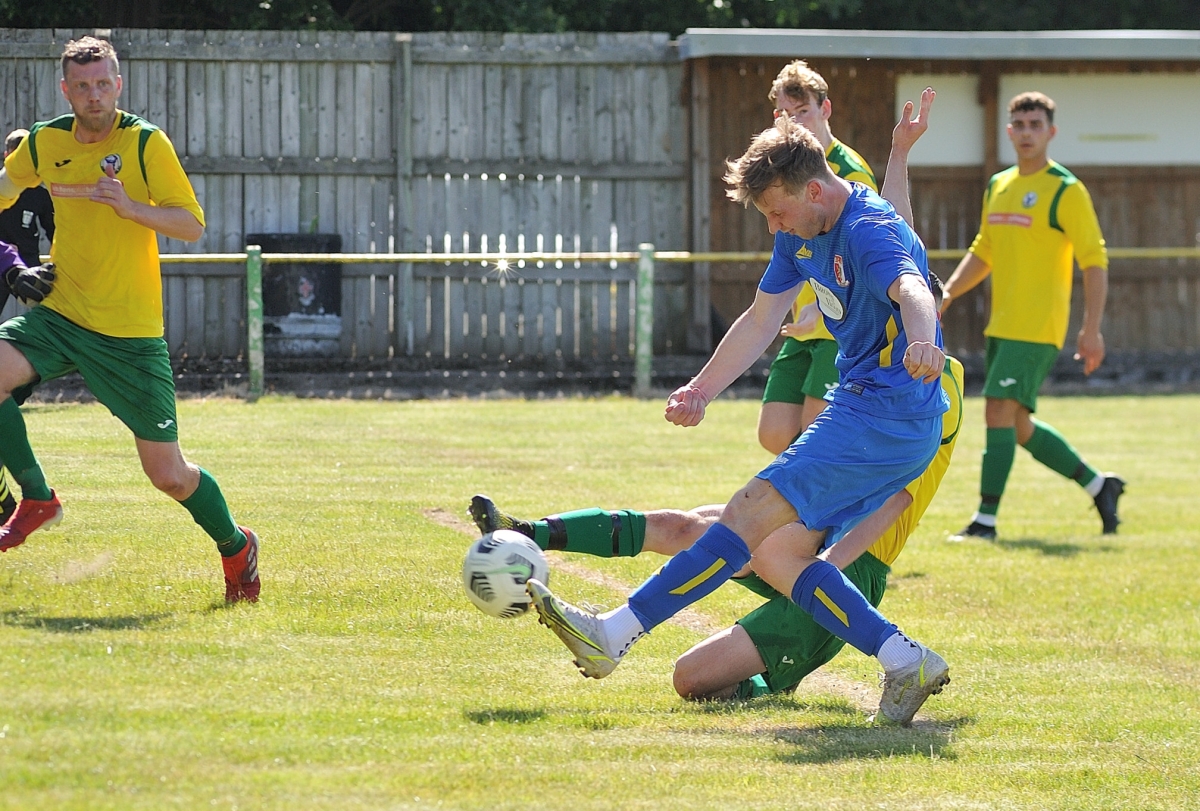 Andrew Johnson has a second half shot blocked.

RCA were drawn against the hosts Esh Winning in the Alderson Building Services Trophy. Prior to our match West Auckland Town played Hartlepool Pools Youth, comfortably going through to the final next week with a 7 - 1 win.

RCA's manager was looking to get minutes of playing time into the players legs after a slight set back in preparations during the week.

Esh had the advantage of the slope in the first half but it was RCA who had majority of possession in the opening period, however with almost their first attacking move Esh took the lead, a long range thunderbolt of a shot was brilliantly saved by Marrs but the ball rebounded to Esh's number 8 who smashed the ball into the net from 10 yards out.

Whilst RCA threatened their only real effort on goal came in the 37th minute when a Charlton corner was met by Jakab but his header was cleared off the line and scrambled away.

The second half produced much more in the way of attacking football from RCA as they dominated from the start.

Johnson latched onto a through ball from Annang-Colquhoun but his shot was well saved by the Esh keeper.

The pressure on the Esh defence was starting to tell and RCA deservedly equalised in the 52nd minute when Annang-Colquhoun dribbled across the park before playing the ball to Charlton who crossed into the six yard box where Hawkins was on hand to stab home.

RCA had a handful of chances to finish the game off with Johnson lobbing the keeper but sending it wide, Morris had a shot saved and Kharufa had two great chances to score but squandered both of them.

The visitors did have the ball in the net in injury time when Hawkins headed home from a free kick but was adjudged to be offside.

The game ended 1-1 and went to penalties which Esh won 4-3. Good luck to them in the final next week against West Auckland Town. We will play Hartlepool Pools Youth.

Another decent workout for the lads in extreme heat, as the temperature reached 26 degrees. A number of encouraging performances but a bit of a blow to see "Sparky" limp off after 10 minutes with a recurrence of  a calf problem.

Next up is a home friendly against Ryton & Crawcrook Albion which has been re-scheduled for Wednesday, 13th July 2022: kick off 7.30pm