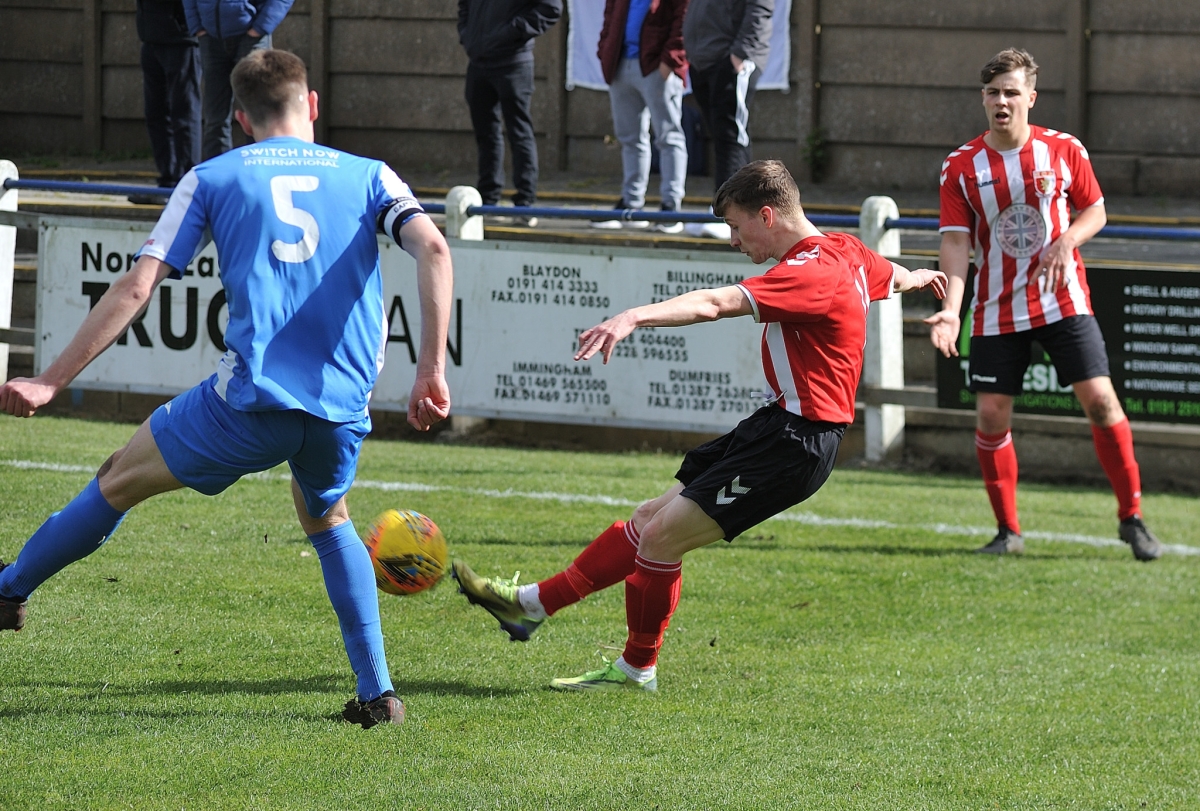 Taylor Richardson whips in a first half cross.

RCA travelled through the Tyne Tunnel for this Northern League Division 1 fixture against Whitley Bay.

The hosts needed all three points to secure their survival in the first division for next season while RCA were looking to bounce back after their defeat to Thornaby last week. The last meeting between the two teams was in March when Whitley Bay won after a penalty shoot-out in the Division one cup, so a tight match was envisaged.

The RCA management team made two changes to the team with Weirs and Annang-Colquhoun replacing the injured Patton and Winn. They also included on the bench Bell and Mitchell members of the under 23’s squad.

RCA started well putting pressure on the Whitley Bay defence from the start, a throw in on the left taken by Charlton was played out to Richardson by Annang-Colquhoun but the wingers cross was over hit.

Minutes later and Hennis won the ball in midfield before playing the ball to Davison who slipped it on to Weirs on the right but his cross was inches behind Annang-Colquhoun and the ball was cleared by K Errington.

At the other end Whitley Bay were awarded a free kick on the left, B Richardson floated the ball to the far post where K Errington won the header but directed it wide of the post.

Ten minutes into the game and RCA showed how good they can be with a great piece of interplay Hennis starting the move playing the ball to Charlton who played it on to T Richardson he then played the ball inside into the path of the run of Charlton who shot wide.

Whitley Bay, against the run of play, took the lead in the 13th minute, a long clearance was picked up by Shanks 20 yards from goal and the Bay striker drilled a low shot beyond the reach of Marrs and just inside the upright.

RCA continued their attacking policy with T Richardson down the left he drifted past his marker before cutting the ball back to Hennis on the edge of the box but he shot wide of the target.

As the game progressed RCA were finding it harder to get meaningful balls forward into the danger area and the next real attack came from Whitley bay when Dippenaar found space on the right before crossing in to the box to the unmarked Geliher but he fired wide with only Marrs to beat.

RCA looked certain to equalise when a great long ball from B Errington found Davison unmarked inside the Bay penalty area but as the RCA striker lined up the shot the ball bobbled and he shinned his shot wide.

In the final throws of the half Shanks had an opportunity to increase the home team's lead but shot straight at Marrs.

The second half saw RCA continue to push for the equaliser while the Bay soaked up the pressure and hit on the counter attack.

A corner on the left was swung into the box by Weirs but Davison couldn’t direct his header on target and the danger past.

Good work in midfield by Hennis and Carr set up a chance for Carr but he shot wide.

15 minutes into the second half and Carr set Annang-Colquhoun free on the left, he cut inside the box before crossing low toward the near post but Dick got a foot to the ball to divert it for a corner.

The corner into the box was missed by all and the ball was cleared up field to B Richardson who sent a viciously dipping shot over the bar.

RCA’s final ball was once again missing when substitute Lawrence made a good run forward but his ball in to Davison was behind him and although he managed to get the ball to Johnson his shot was hit tamely wide.

It was one way traffic at this point as RCA pressed forward a Hennis freekick was headed down by Jakab to Johnson but his effort was easily saved by Lister.

Another probing run by Lawrence caught the Bay defence off guard as he surged to the edge of the box before releasing the ball to car who flicked it into the path of Weirs who elected to square the ball to Davison but he shot straight at Lister.

Further chances were squandered by RCA with Johnson blasting a good chance out of the ground.

With RCA running out of ideas the home side mounted a number of attacks as they took back control of the game in the final 10 minutes only a superb save by Marrs from Cresdee stopped the Bay from doubling their lead.

However in the final minute of the game they did make it 2-0 when Cresdee dribbled across the RCA penalty area before releasing the ball to Orrell who made no mistake from 10 yards out.

Cue massive scenes of relief both on the pitch and all around the ground.

RCA still had chances in injury time but Whitley Bay’s defence was in no mood to give them any sort of a foothold in this game.

Once again RCA failed to score against a team struggling at the wrong end of the table. However there can be no complaints about the players' commitment throughout the season they have performed over and above expectations and look certain to finish in the top half of the table.

To be totally honest some of the players looked a little leg weary and tired towards the end of the match. The potential is there for this team to do really well if they stick together.

Behind the scenes the club is working extremely hard in the development of the facilities over the next few seasons. A long term lease offered and accepted by the club will secure the club's future at Sunderland LGV Park (Meadow Park) for the foreseeable future.