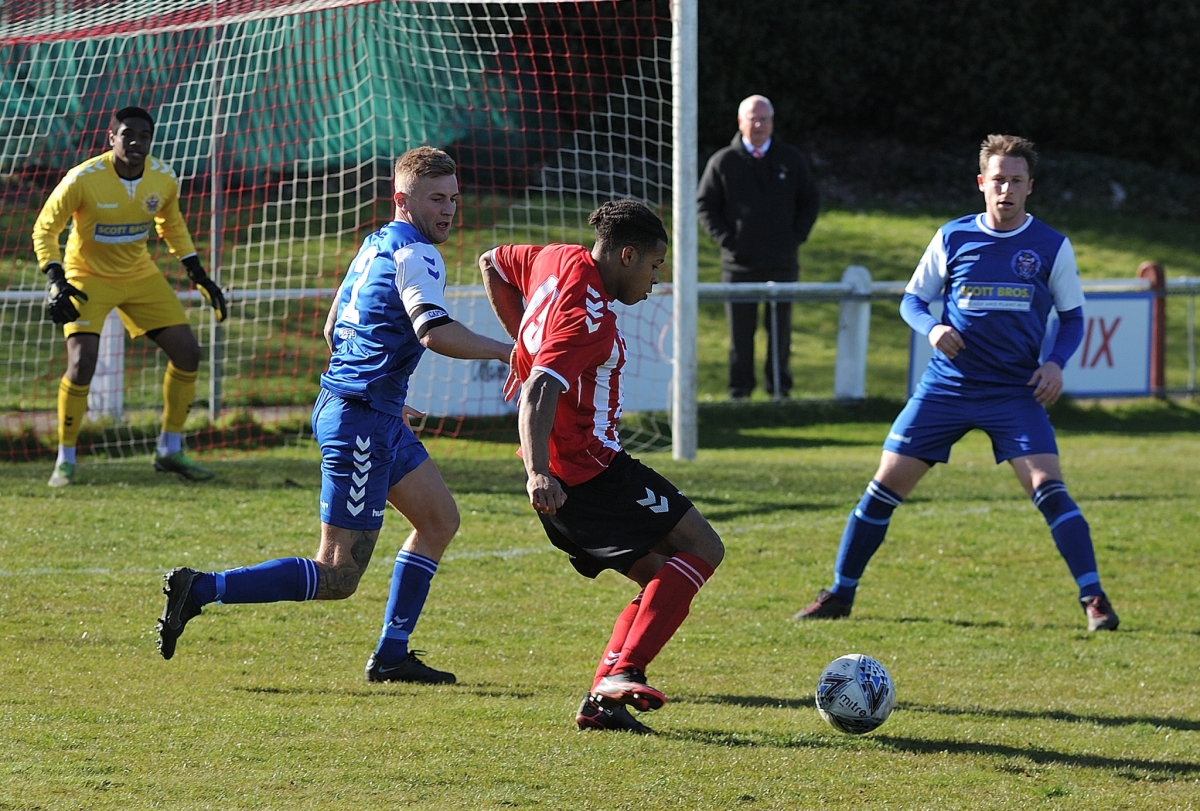 Michael Annang-Colquhoun looks for a consolation goal in the second half of the match.

Today’s visitors Thornaby have had a very good season so far but travelled to Sunderland LGV Park without a win in their last five matches while RCA were undefeated in their last four outings.

RCA were forced to make a number of changes to the team who secured three points at Billingham Town last week, Winn, Hawkins and Carr replaced Allen, Weirs and Annang-Colquhoun.

RCA had the advantage of the slope in the first half and they started well, a ball from Hennis found Richardson on the left wing and he cut inside onto his right foot before curling in a dangerous cross which drifted over the head of Davison and out for a goalkick.

The home team was struggling to come to terms with the tricky play of Giroud and Hogan was having a field day on the left as he seemed effortlessly to be able to find space.

It was this combination which doubled Thornaby’s lead in the 10th minute, Giroud managed to extricate himself from the attention of three RCA midfielders before sending an inch perfect crossfield ball to Hogan on the left again with acres of space he took a couple of forward touches before firing the ball into the box where Beddow was on hand to side foot the ball beyond the reach of Marrs and into the net.

Thornaby were turning the screw on an unusually shaky RCA defence and almost made it 3 -0 five minutes later when a Giroud freekick was met by the head of Frazer but his header was well wide of the target.

A minute later and the same player headed a Guru corner wide of the target.

The home team were struggling to put any form of passing moves together relying on sending long hopeful balls forward for Richardson or Davison to chase but the Thornaby defence managed the RCA forward line very well.

In the 23rd minute RCA forced a corner on the right, Charlton took the kick to the near post where Errington manager to get his head to but it ricocheted off the cross bar and was hooked to safety by Moore.

This sparked another attack on the left by Thornaby, McAvoy sending a searching ball beyond the RCA defence to Hogan; he dribbled into the box before firing in a low shot from an acute angle which Marrs managed to bundle out for a corner.

Within minutes Hogan was at it again totally free on the left he was able to get in another dangerous cross which Charlton was happy to head behind for a corner under pressure from Flounders.

Thornaby were well on top despite kicking up the slope and in the 33rd minute Giroud intercepted a poor defence clearance and laid the ball to C Hutchinson who fired in a shot which forced a saved by Marrs low down to his left.

Inside the final ten minutes of the half and another Thornaby corner was only half cleared and the ball fell to Beddow who fired wide and a minute later he was denied his hat-trick when McAvoy crossed into the RCA box and Beddow chipped the ball toward goal only for Marrs to fingertip the ball over the bar.

RCA’s only response to all this pressure was a long ball out to Richardson who found enough space to send in a cross to Winn who headed it down to Patton who took too long to control the ball and Frazer was able to dispossess him and clear up field.

The visitors made it 3-0 in the 42nd minute when Patton lost the ball inside his own half under pressure from Flounders and Giroud and the ball was played forward to Beddow on the edge of the penalty area and the Thornaby striker drilled the ball low across the goal and into the far corner of the net to complete his hat-trick.

The start of the second half saw RCA playing a more positive brand of football as they tried to get back into the game but the Thornaby defence was in no mood to give anything away.

A good move down the right saw Jakab play the ball to Carr, he cut inside and slipped the ball to Winn but his effort was blocked.

Although RCA were pushing forward and putting pressure on the Thornaby defence they were lacking the final ball into dangerous areas and Hunt was not called upon to make any sort of save.

At the other end a good move between Giraud and C Hutchinson opened up the RCA defence but the final shot from Kenny was easily collected by Marrs.

The introduction of Annang-Colquhoun gave a little more pace and urgency to the game but still most of the attacking moves fizzled out inside the final third.

Annang-Colquhoun won a corner on the right and when it was delivered by Charlton and Davison’s header found Patton who mishit his shot and Guru half cleared the ball to Carr but he snatched at his shot and it flew over the bar.

Two minutes later and Thornaby had a strong penalty appeal turned down and a freekick awarded to the home team. Although everyone in the ground believed it was for simulation the referee gave the freekick for a shirt pulling incident which stopped the defender putting in the tackle.

In the 75th minute, Andrew Johnson took to the field for the first time since 18 August 2021, a tremendous boost to the player and the club to have him back after being sidelined for seven and a half months after extensive knee surgery.

RCA were a lot better in the second half without creating any real chances and it was the visitors who finished off the game on 84 minutes when an unchallenged Scaife-Wheatley was able to cross into the box and despite being covered by three defenders A Hutchinson, on work experience from Middlesbrough, managed to head the ball past the despairing dive of Marrs and into the net to cap an excellent all round performance from the visitors.

From an RCA perspective the least said about this game the better.

We were totally out played in the first half as Thornaby seemed able to break through our defensive line at will.

The second half was a lot better but we still did not create anywhere near the amount of chance that we created last week. It should be noted however that the last time we conceded four goals in a match was way back in October 2021.

We need to put this to one side and regroup for our next match away to Whitley Bay on Saturday, 9 April 2022: Kick off: 3.00pm.