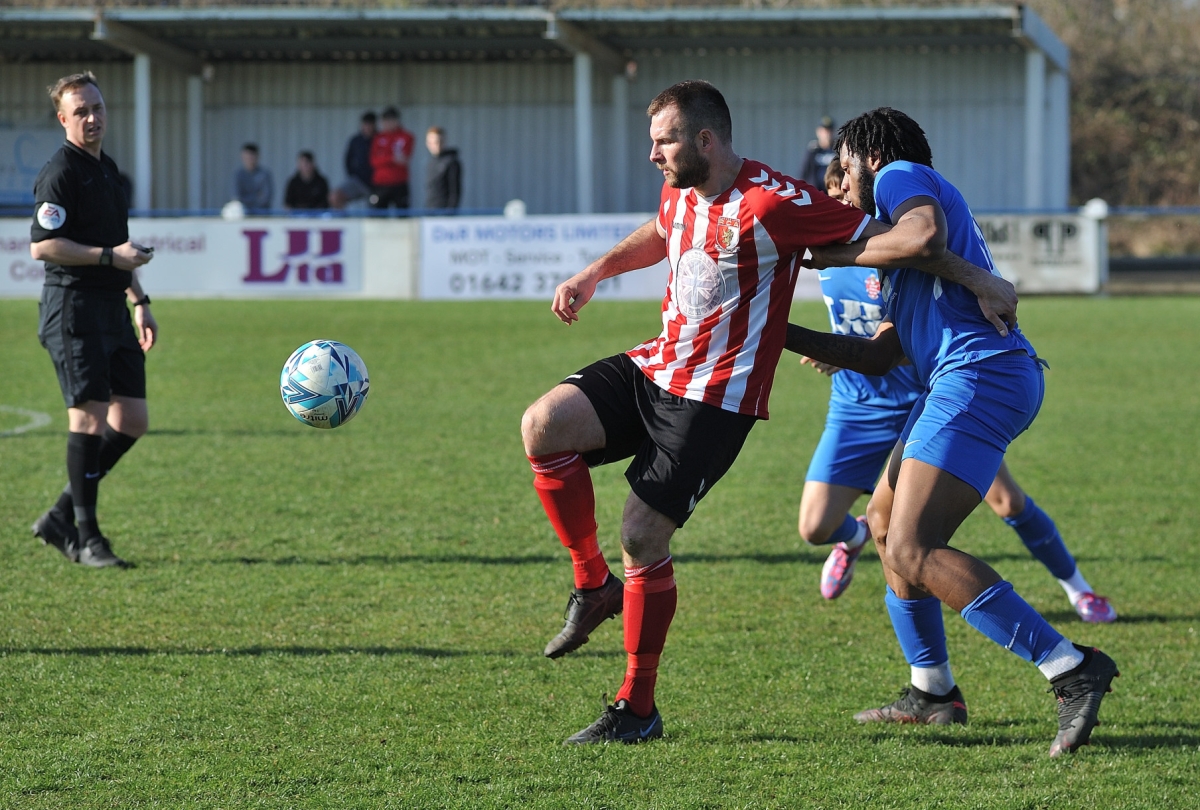 RCA made the trip down the A19 to play bottom of the table Billingham Town looking to add to their run of three games unbeaten. Billingham Town, on the other hand, would be looking for a result to give them a chance of survival in the first Division so a tight match was forecast prior to kick off.

With both Dan Hawkins and Greg Swansbury out injured the captain's armband was given to Mark Davison. Callum Patton, whose dramatic late goal last week gave RCA three points against Newton Aycliffe, came into the starting 11 to replace Hawkins.

A lovely sunny, if somewhat chilly, spring day greeted the players onto the pitch in front of a crowd of 175 on Nonleague Day.

RCA started the game on the front foot looking to play down both wings with Richardson and Weirs both involved early in the game but the Billingham defence was well marshaled with Beedon commanding at the back.

As the game progressed RCA started to get on top a good run on the right by Weirs was spotted by Allen who played a great ball into his path but Beedon managed to get across and clear the ball.

RCA almost scored in the 11th minute when they were awarded a freekick on the left hand side of the penalty area, Charlton took the kick sending it to the far side of the goal where Errington at full stretch volleyed the ball against the post.

A minute later Allen picked up the ball on the right wing, Dribbled his way to the bye-line before cutting the ball back to Richardson who smashed the ball first time inches over the bar.

Billingham, playing the ball out from the back, found some space on the right as Nelson and Jatta combined to set up Boyle but he hooked his long range effort wide of the target.

The game was settling down with most of the action in the middle of the park. A freekick by Patton which went well over the bar was the only real goalmouth action.

With 20 minutes gone Beedon sent a long ball forward to Jatta who cut inside before playing the ball into the channel for Rennison who controlled the ball well before drilling a low shot which Marrs did well to save as it was creeping inside the near post.

This heralded a spell of possession by the home team with Boyle and Jatta combining before playing the ball to Jennison on the left, he squared the ball to Painter who fired in a low shot which flew past the post.

RCA fought back and a good ball forward from Jakab found Davison in space on the edge of the box but his shot went wide of the target.

A minute later and Hennis won the ball in midfield, Patton picked up the loose ball and sent it forward where Weirs, was able to head the ball on to Davison who again, with only the keeper to beat shot wide of the target.

The visitors were piling on the pressure and in the 27th minute the Billingham defence finally conceded, Davison a managed to out jump Beedon to head a Richardson cross on to Weirs inside the area, his shot was saved by Norton but Annang-Colquhoun following up managed to stab the ball home before Norton could recover.

However, the lead was short lived as Billingham responded within 60 seconds. A ball forward by Painter was headed away by Errington but Jatta managed to retrieve the clearance playing it forward to Boyle who side stepped a challenge before driving a shot, from the edge of the box, beyond the outstretched arms of Marrs and into the net for the equaliser.

The game completely opened up now as RCA poured forward looking to retake the lead, a ball forward by Patton was played on by Annang-Colquhoun into the path of Davison who drifted past his marker before sending in a low cross which Norton managed to block for a corner under pressure from Richardson and Weirs.

The corner taken by Weirs was met by Jakab whose powerful header struck Beedon on the back of the head and was cleared up field by Cann.

Billingham almost took the lead against the run of play when a ball forward by Snaith fell between Jakab and Allen neither took responsibility and Close reacted to nip between the pair and send in a shot which Marrs saved.

In the dying minutes of the half RCA created another golden opportunity with Annang-Colquhoun feeding the ball to Davison but again the RCA leading goal scorer squandered the chance firing wide of the target.

The second half again saw RCA pushing forward while Billingham were content to soak up the pressure and hit on the break.

A good move down the left early in the half saw Charlton and Weirs combine to break down the Billingham rearguard but the cross into the box from a dangerous position was punched off the head of Davison by Norton.

Cann picked up a loose pass from Patton and drove forward before seeing his cross into the box headed clear by Jakab.

Billingham counter attacked again when Beeden cut out a cross from Charlton and sent the ball into the path of Jatta who unleashed a terrific shot from 30 yards out which ricocheted off Errington and out for a corner.

The resulting corner saw RCA counter quickly through Weirs who outpaced the Billingham defence before playing the ball across the edge of the penalty area to Davison but Nelson was able to block his shot and scramble the ball away.

Minutes later and Norton was called upon to produce a spectacular save, Hennis played the ball forward to Weirs who jinxed past his marker before hitting a dipping volley from 12 yards out by Norton somehow managed to get a hand to it to flick it over the bar for a corner.

Charlton took the corner and Patton flicked a great header inches wide of the far post.

The management teams of both sides made substitutions in an effort to instill some life into the game and it did just that with Winn displaying some of the powerful running and closing down which has been lacking in recent games.

A freekick deep in RCA half was taken by Marrs, playing it to the right hand side of the opposition's penalty area where Winn rose to head across the box and Richardson tried an audacious bicycle kick which was well saved by Norton at the foot of the post.

However, RCA were not to be denied and in the 80th minute took the lead when a defensive clearance led to a race for the ball between Winn and Norton, the RCA striker slid in to win the ball which fell kindly for him and he was able to recover sufficiently to hook the ball into the net.

The visitors with the lead decided to shut up shop and were unlucky not to make it 3-1 in the last minute of normal time when Richardson’s cross was picked up by Winn on the right, he unselfishly played the ball to Davison who smashed the ball towards the bottom corner of the goal only for Norton to pull off another fantastic save palming the ball out for a corner.

RCA played out the final minutes of injury time to record their second 2 -1 win in a row and extend their unbeaten run to four.

This could so easily have been an easy win for RCA but their inability to find the net and add to the two goals they did score was very frustrating.

The positive is that we are creating plenty of chances and at some point the goals will start to flow again.

Next up is a home game against Thornaby on Saturday, 2 April 2022.