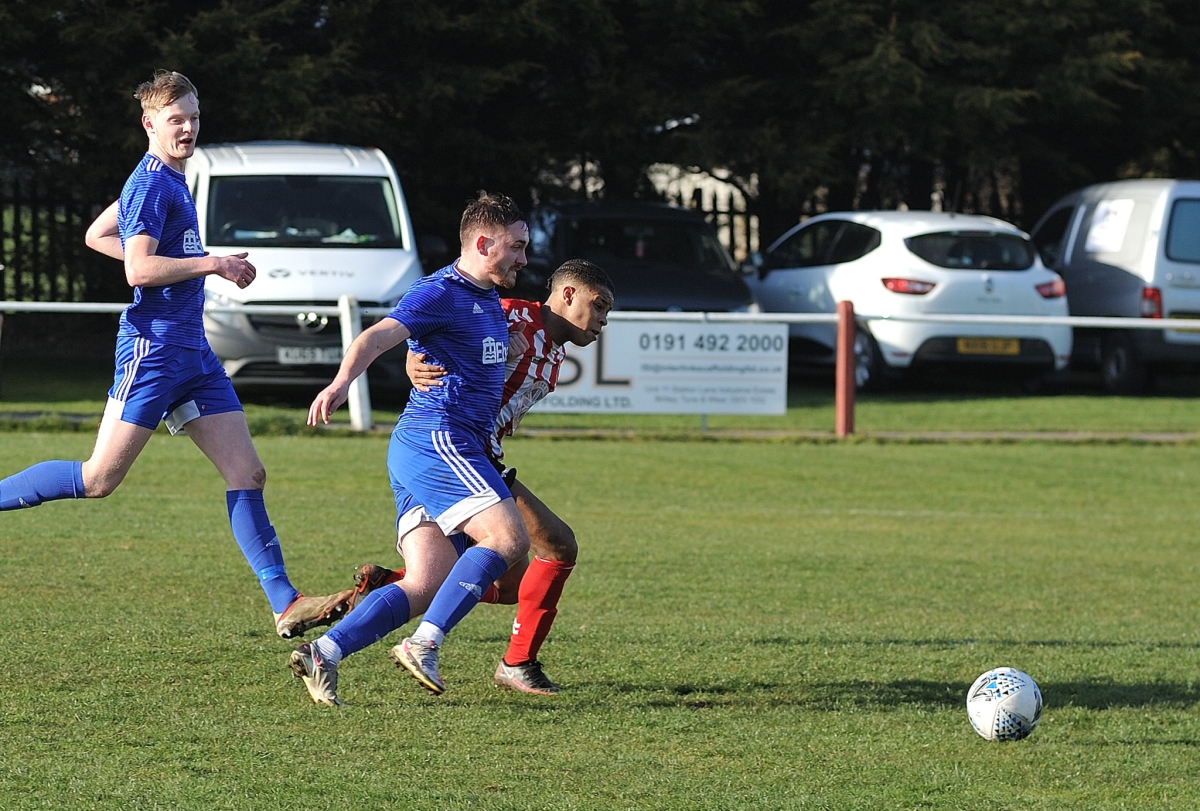 Michael Annang-Colquhoun on the attack during the second half of the match.

Newton Aycliffe started the season in fine form until we managed to end a good run back in October 2021 and they arrived today on the back of a seven match unbeaten league run. They, like us, were defeated by Crook Town in the Durham Challenge Cup.

Newton Aycliffe started well and although RCA had the kick off they were dispossessed within five seconds of the start as Aycliffe stormed forward to create the first chance of the game, but Costello’s shot was blocked by Jakab and cleared.

RCA took the lead in the sixth minute when a diagonal ball from Hennis was collected by Weirs who, from 20 yards out, chipped the ball over the advancing Pickford and into the net for a truly sublime goal.

Minutes later it could have been 2 – 0 when Weirs again picked up a pass from Hennis on the right. His cross into the box was met by Davison, but his header flew over the bar.

With the advantage of the slope, RCA started to put pressure on the visitors' defence but Aycliffe held firm and to their credit were gaining some success with their swift counter attacks.

With quarter of an hour gone RCA were awarded a free kick which was taken by Hawkins but his shot was deflected for a corner, the kick was easily defended and set up a quick counter through Ardelean who picked up the ball on the halfway line before switching it to Howard, his cross to the edge of the box was met by Dibb-Fuller but his first time effort went well over the bar.

The game then became bogged down in midfield with a number of stoppages for injuries adding to an overall disappointing match and it wasn’t until the 35th minute before any further goalmouth action.

A Marrs free kick from deep in RCA’s half was headed into the path of Richardson by Davison but the diminutive winger’s volley was well saved by Pickford and the follow up shot by Charlton was drilled wide of the target.

Annang-Colquhoun forced a corner after a good run down the right and Charlton’s kick was headed on by Errington and fell to Richardson who again stung the hands of Pickford who was able to collect at the second attempt.

Richardson was in the thick of the action a minute later when Allen’s crossfield ball was picked up by the winger on the left and he sent in a terrific curling shot which was tipped onto the bar by Pickford.

The resulting corner was easily defended by Brown who sent the ball out wide to Dibb-Fuller, he in turn played the ball forward to Ardelean but Errington was able to get back and clear the ball for a corner before the Aycliffe striker could get in a shot.

As the game entered the last minute of the half Brown played a searching ball forward to Jarvie he laid the ball into the path of Ardelean but he fired wide of the target.

The second half got underway and Aycliffe immediately went on the offensive, Brown sending a ball forward to Wood who slipped past two markers before playing the ball to Jarvie but his shot was blocked by Allen and the ball fell kindly into the arms of Marrs.

A chance fell to Dibb-Fuller when he picked up a pass from Munro only to waste a good opportunity by smashing his shot high over the bar.

Within a minute the visitors were awarded a dubious penalty when Jarvie was alleged to have been fouled inside the box. However justice was seen to be done when Marrs guessed the right way to save Dibb-Fuller’s spot kick.

RCA’s first attack of the second half came on the hour mark when Annang-Colquhoun broke down the right, he dribbled his way into the penalty area before playing the ball to Weirs but his first time shot was well saved by Pickford.

There followed a good spell of pressure by RCA where Davison headed a Charlton corner onto the bar. Then a thunderous shot from Richardson was brilliantly saved by Pickford.

Aycliffe responded with a well worked move, Costello picking out the run of Walton who crossed into the box where substitute Walker headed inches over the bar.

As the game entered the final 10 minutes Aycliffe got their equaliser, an innocuous cross into the box by Costello took a deflection off Charlton before hitting Jakab and bouncing into an empty net.

With time running out RCA pushed forward looking for a winner. Hawkins played a good ball forward to Carr who slid the ball to Davison but he fired wide of the upright.

A minute later and RCA had strong claims for a penalty turned down when Patton was upended by Pickford as he slipped the ball past the advancing keeper.

Deep into injury time and a break by Charlton on the left saw him play the ball to Hawkins and hit cross was headed onto the crossbar by Patton and the rebound was headed out for a corner.

Charlton took the kick which he sent in low towards the near post where Patton stooped down to glance a header up and over Pickford and into the far corner of the net.

This was not one of RCA’s better performances but they worked hard for the full 90 minutes and came away with three points after two fantastic goals gave them victory over an in form Newton Aycliffe team.