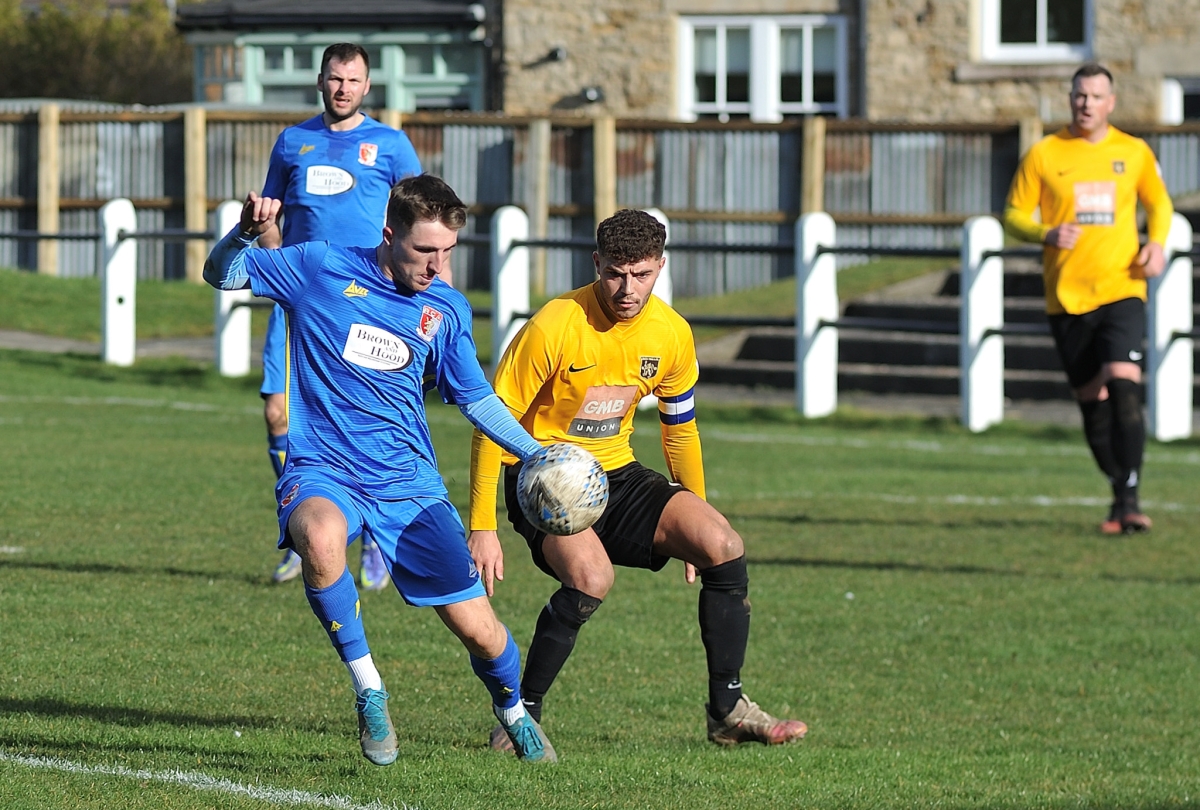 Callum Guy's assist earned RCA a share of the spoils at the Millfield.

The mid week defeat in the 1st Division Cup on penalties to Whitley Bay was a blow to the team and they would be expecting to produce a better performance in today’s match.

A bright but windy day greeted the players onto the pitch and Crook took advantage of the strong wind in the first half.

An early Crook attack was repelled by Jakab who sent a long ball forward to Winn who controlled the ball before curling a shot beyond Makepeace, the ball struck the inside of the post and the rebound fell to Richardson inside the six yard box with an open goal he blasted the ball over the bar.

While Crook had a lot of early possession their final ball was missing and RCA defence was able to cope fairly easily.

RCA were exploiting the left hand side through Charlton and Richardson with a succession of breaks which resulted in Crook conceding a number of corners, none of them coming to much.

It was a foray down the right which produced their next effort on goal when Allen picked up a pass from Hennis before dribbling past two defenders and clipping a good early ball into the box where Davison rose to head the ball but it lacked power and drifted into the arms of Makepeace.

At the other end Webb made a good forward run before releasing the ball to Nelson on the right wing, his floated cross was plucked off the head of the advancing Thomas to prevent an almost certain goal.

The game degenerated into a midfield battle with little good football being played by either team until the 25th minute when Nash ran at the RCA defence before squaring the ball to Webb who struck a low shot which flew just wide of the target.

This prompted RCA’s best spell of the game. A throw in on the left was taken by Charlton who found Hennis; he exchanged passes with Hawkins before releasing the ball to Richardson whose cross was headed just wide by Davison.

Then minutes later Guy intercepted a pass in the centre circle before passing out to Allen on the right, he cut inside, before dribbling to the bye-line but his cross was deflected for a corner. Richardson took the corner which was headed narrowly over the bar by Winn.

Slightly against the run of play Crook took the lead in the 34th minute when Nicholas raced on to a long ball over the top of the RCA defence, Marrs, caught in two minds, slipped over making it a fairly easy decision for the Crook winger and he slid the ball past the RCA keeper and into the net.

The response from RCA was to push forward looking for an early equaliser but their only real threat prior to half time came when Winn got in behind the Crook defence squared the ball to Guy but he fired well wide of the target.

RCA, with the wind at their backs, stepped up the pace from the start of the second half.

Hennis picking up a loose pass on the half way line played the ball to Richardson, he in turn found Allen on the right and his cross into the box caused problems for the home defence with a poor clearance falling to Winn who stabbed the ball wide.

The visitors were applying a lot of pressure on the Crook defence and in the 57th minute they got their reward when Guy’s freekick was headed home by Hennis for his second goal in a week.

Three minutes later and it could have been 2-1 to RCA when Davison met a Charlton cross but his powerful downward header went inches wide of the upright.

Crook with their first real attack of the half should have scored, another long ball out of defence went straight over the RCA defence and again Nicholas raced onto the ball carried it inside the area where Marrs pulled off a spectacular block to deny Crook the lead and Errington was able to clear up field.

Allen was involved in the buildup to the next attack when he received the ball on the right before playing it to Carr inside the penalty area, he turned his marker but instead of shooting he played the ball into the path of Hennis on the edge of the box and his shot flew over the bar.

With all substitutes played RCA applied a lot of pressure onto the Crook defence but it held firm and the match ended in a 1-1 draw.

A game as they say of two halves with the wind playing a bigger part in proceedings than it appeared from the touchline.

The second half performance was almost back to the sort of play we were producing when we were not conceding goals earlier in the year. A good all round performance. Defensively we need to concentrate more as we were caught out by two balls over the top which almost cost us. That being said we did look solid throughout the team particularly in the second half.

Next up is a home EBAC Northern League match against Newton Aycliffe on Saturday, 19 March 2022; Kick off 3.00pm