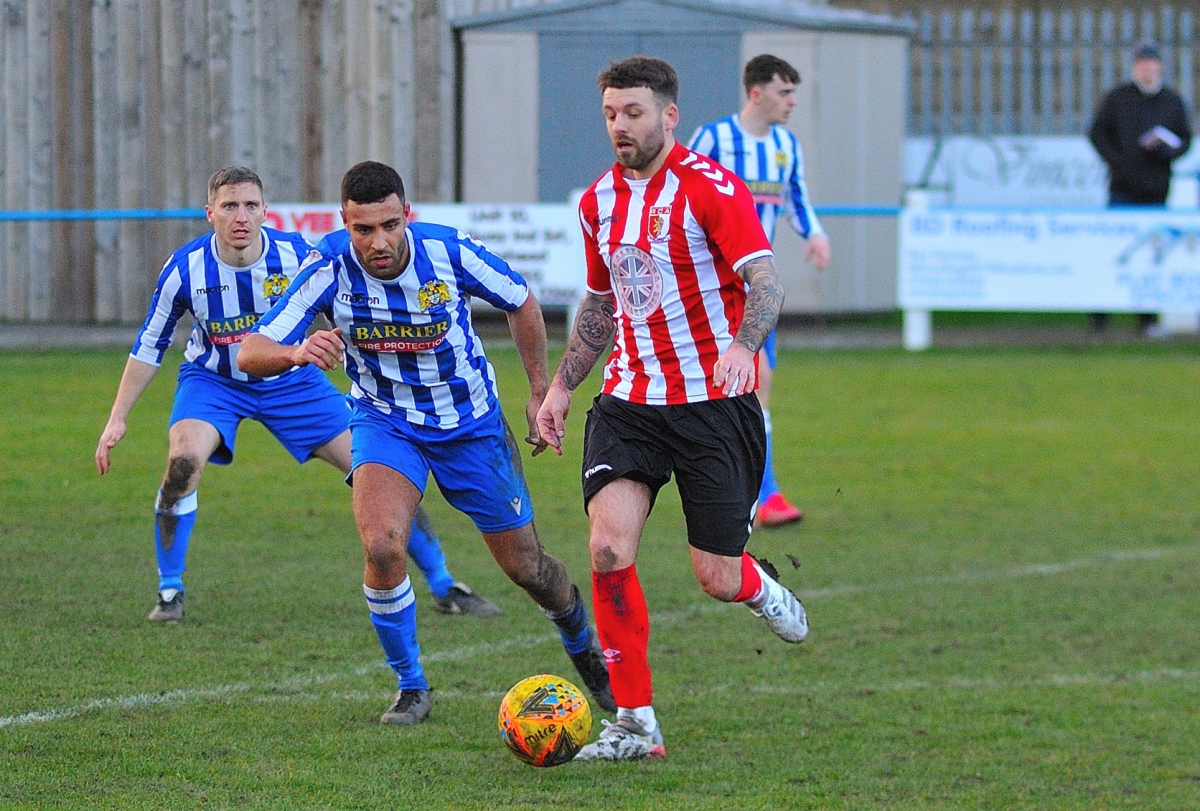 Recent signing Callum Patton on the attack during the second half of the match.

RCA travelled to play Newcastle Benfield at their Sam Smith ground in this Ebac Northern League Div I fixture. After the recent high winds which have blighted our matches of late it was a refreshing change for the sun to come out with no wind at all. Storm Eunice seemed to have decided not to venture into Newcastle.

The record of matches between these two teams shows that they have both won 10 games with 3 matches drawn over a period of 10 years. RCA narrowly beat Benfield earlier in the season in what was a tight affair which saw RCA come from behind to record a 3-2 victory.

An early attack by RCA which involved Hennis and Weirs on the right was eventually stopped when Weirs cross into the box was intercepted by Turnbull and cleared up field.

Despite RCA having the better of the early exchanges it was the home team who almost opened the scoring, a good run down the left wing by Scorgie resulted in a perfect cross to the edge of the box where Robson was on hand to drill a low shot goalward but Marrs was able to get down quickly to make the save.

Walker set up Benfield’s next attack dribbling to the edge of the area before cutting the ball back to Robson but Swansbury was able to get across and block the shot.

RCA were being forced back but as in previous matches the defence was holding firm, a corner on the right was partially cleared by Errington, the ball fell to Scorgie on the edge of the box but he fired well wide.

The game became a battle in midfield with neither team seeming to gain control Hennis and Robson were in the thick of it winning balls in the centre circle but neither team seemed capable of creating anything in the final third.

With half an hour gone apart from the one Marrs save neither keeper had been called upon to make a save as both defences held firm.

It wasn’t until the 35 minute that Grainger was forced to make a save when Hennis won the ball in the centre circle and played it forward to Jakab who hit a powerful shot which Grainger held at the second attempt.

Within minutes a good ball into the box by Weirs from a freekick on the right had the Benfield defence panicking as Grainger seemed to miss the flight of the ball and flapped at the ball which bobbled about inside the six yard area before it was cleared for a corner. Weirs took the kick which was cleared by Turnbull but it fell to Hennis 30 yards out and the RCA man struck the ball with the outside of his left boot but it was always curling away from goal.

In the final minute of the half a long ball forward by Renney was well controlled by Brayson on the edge of the box and for the first time in the match he created a half a yard of space before smashing a shot high over the crossbar.

The visitors started the second half well Charlton finding Richardson on the right with a crossfield ball the winger cut inside before playing a delicate ball in to Davison whose shot was blocked by Slaughter and luckily for the home team ended up in Grainger’s arms with Annang-Colquhoun ready to pounce.

As the second half settled down the game opened up a little and both sides created chances, Glen-Ravenhill causing problems in the RCA defence with a drilled cross which hit Errington rebounded to Brayson who mishit his shot and it was cleared by Jakab. Then at the other end Allen played the ball forward to Richardson who skipped through two tackles before striking a low shot which Grainger saved.

With an hour gone the next chance fell to Benfield, a freekick on the left was curled into the box where Turnbull managed to get a header on target but Charlton was in the right place to head the ball off the line and Allen cleared up field.

RCA introduced Patton into the game and he made an immediate impact, Hennis won the ball inside the Benfield half before playing it forward to Patton who cleverly wrong footed his marker before curling a shot over the bar.

A good passage of play almost saw RCA open the scoring, Swansbury won the ball in the centre circle before sliding it out to Charlton he then took a return pass from Richardson before crossing into the box but Grainger read the danger and plucked the ball off the head of the unmarked Davison.

RCA were getting up a head of steam as they poured forward, Richardson was a constant threat down the left and was unlucky not to score when he received a good ball from Allen, he cut inside one defender before skipping the tackle of another two challenges but his final shot was easily saved by Grainger.

Within minutes and a freekick to RCA was only half cleared by Renney and fell to Allen on the edge of the box but he stabbed the ball wide of the target.

Slightly against the run of play in the second half Benfield took the lead in the 83rd minute. A freekick in the centre of the park was curled into the box where Turnbull managed to get to the ball ahead of Marrs and steer the ball into the net.

Within minutes they made it 2 – 0, with RCA pushing forward looking for an equaliser they were caught with a sucker punch as the ball was intercepted and a hopeful ball played forward, it was picked up by substitute, Leonard who cut inside the box before slipping the ball past Marrs and into the net.

RCA battled to the end to try and get back into the game but the Benfield defence did its job and kept them at bay.

On a difficult pitch it was not a particularly entertaining game but you could not fault the commitment of both sets of players. RCA gifted their opponent’s two goals today and were lacking in the final third which was the difference between the two sides. We keep saying it but it is small margins one way or the other that wins or loses games.

We have a free weekend next week so our next match will be against West Auckland on Friday, 4 March 2022. Kick off 7.30pm.