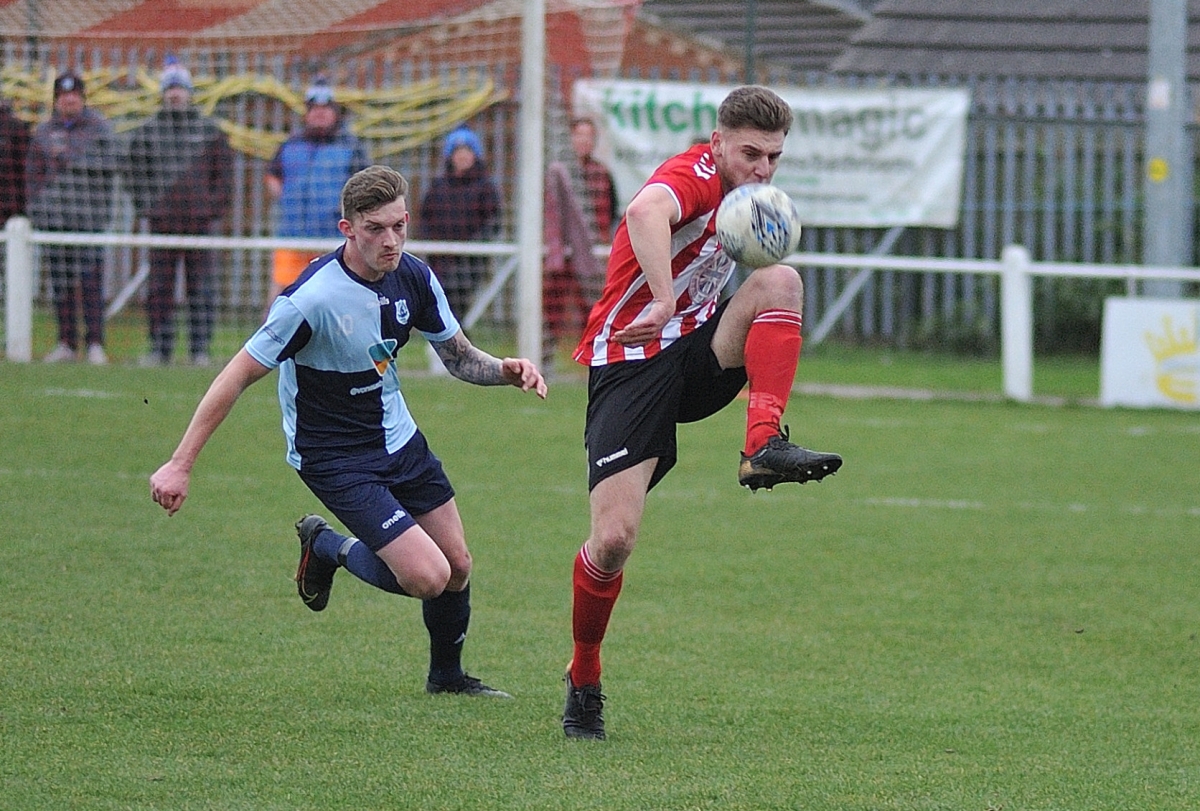 The pitch looked in good condition after the recent rain and, as ever, there was a strong wind blowing down the pitch.

RCA were looking to keep their four match unbeaten run going while Bishop’s would be hoping that their resurgence of form would continue with only one defeat in the last five matches, everything was set for an entertaining game of football.

Simon Jakab returned to the starting eleven after his suspension and took the place of Callum Guy who received a knock during the Whickham game and was rested for today’s match. New signing Callum Patton took his place on the bench.

The visitors took advantage of the slope and the wind in the first half but it was RCA who created the first opening of the game when Weirs intercepted a Callaghan pass and played the ball out to Charlton on the left, he switched play with a cross field ball to Hennis but his cross was blocked by Rowbotham before Davison could pounce.

Minutes later and a good ball forward by Mills was picked up by Callaghan 20 yards out and he drilled a low shot which Marrs did well to get his body behind and deny the ex RCA player.

RCA’s next attacked on the right with Jakab spotting the run of Annang-Colquhoun he was fouled as he tried to cut inside the full back, Weirs took the kick which was headed down by Davison but Lavery was able to scramble the ball away.

Bishops took the lead in the in the 13 minute when a ball out of defence by Callaghan found Miller in space on the left, he sprinted down the wing outpacing the RCA defence before sending a low cross into the box where Milburn, bursting into the box, blasted an unstoppable volley off the underside of the bar and into the net.

RCA responded well to going a goal down. A free kick taken by Allen was picked up by Winn who found Davison, he chipped the ball out to the left where Swansbury headed back across the face of the goal but out of reach of any RCA forwards and Miller cleared the danger.

A minute later and Annang-Colquhoun sent in a great cross into the box for Davison but his header was cleared off the line by Rowbotham.

The visitors almost went 2-0 up in bizarre circumstances, a corner on the left taken by Mills was punched by Marrs onto his own bar but he recovered quickly to claim the ball at the second attempt under extreme pressure.

With half an hour gone Mills found space on the left and sent in a low cross which was met by Giles but from six yards out he stabbed the ball over the bar.

The home team was being forced to defend deep in the final 15 minutes of the half and the visitors and Mills in particular were causing a lot of problems. In the 36 minute they were awarded a free kick 30 yards out, Mills smashed a vicious shot over the wall and onto the bar, the ball struck Marrs on the back but Charlton was on hand to hook the ball clear.

RCA’s best chance of the half fell to Annang-Colquhoun when he was released by Hennis into the box, one on one with Liversedge. He directed his shot well but the Bishop’s keeper produced a truly outstanding save to deny the RCA forward.

The second half started brightly for the home side. An Errington through ball was laid into the path of Davison who drove a low shot towards the bottom right corner but Liversedge was equal to it making a good save.

Five minutes later as RCA were applying pressure on the visitor’s defence Annang-Colquhoun dribbled past three defenders before playing the ball across to Winn whose back heel found Davison but his shot was blocked.

RCA had a great chance to equalise a minute later when a poor clearance was picked up by Weirs who took the ball forward before unleashing a dipping shot which cleared the bar by inches with Liversedge beaten for once.

15 minutes into the second half and it was all RCA, a further chance arrived when Hennis won the ball in midfield, played the ball to Allen, his pin-point cross was met by Davison but he directed his header just wide of the target.

There were strong appeals for a penalty when Davison burst into the box and looked to be held back by a Bishop defender but the referee was unimpressed and gave a corner instead.

Both teams brought on substitutes as the game entered the final half hour and with his first touch of the ball RCA new signing Patton forced a good save from Liversedge.

However that was as good as it got for the home team because, against the run of play Liversedge sent a long clearance forward and inexplicably the RCA defence allowed the ball to go straight through to Whitfield who had cut in from the right, he had time to control the ball before dispatch the ball low into the bottom corner of the net to make it 2-0.

This seemed to take the wind out of the sails of the home team and try as the might they never really looked like they were going to score.

At the other end a good run by Milburn on the right set up Tumilty but he fired wide.

Into injury time and RCA were awarded a penalty which Davison took driving the ball low to his left but Liversedge pulled off yet another superb save to maintain his clean sheet.

This was not one of RCA’s best performances and once again we have been beaten by a team at the wrong end of the table.

However it has to be said that this is the first time that we have conceded more than one goal in a match since we were beaten by Consett 2-0 on 6th November 2021. For the superstitious amongst us the Bishop match was the 13th game.

Our next match is another difficult match away to Newcastle Benfield on Saturday, 19th February 2022: Kick off 3.00pm.