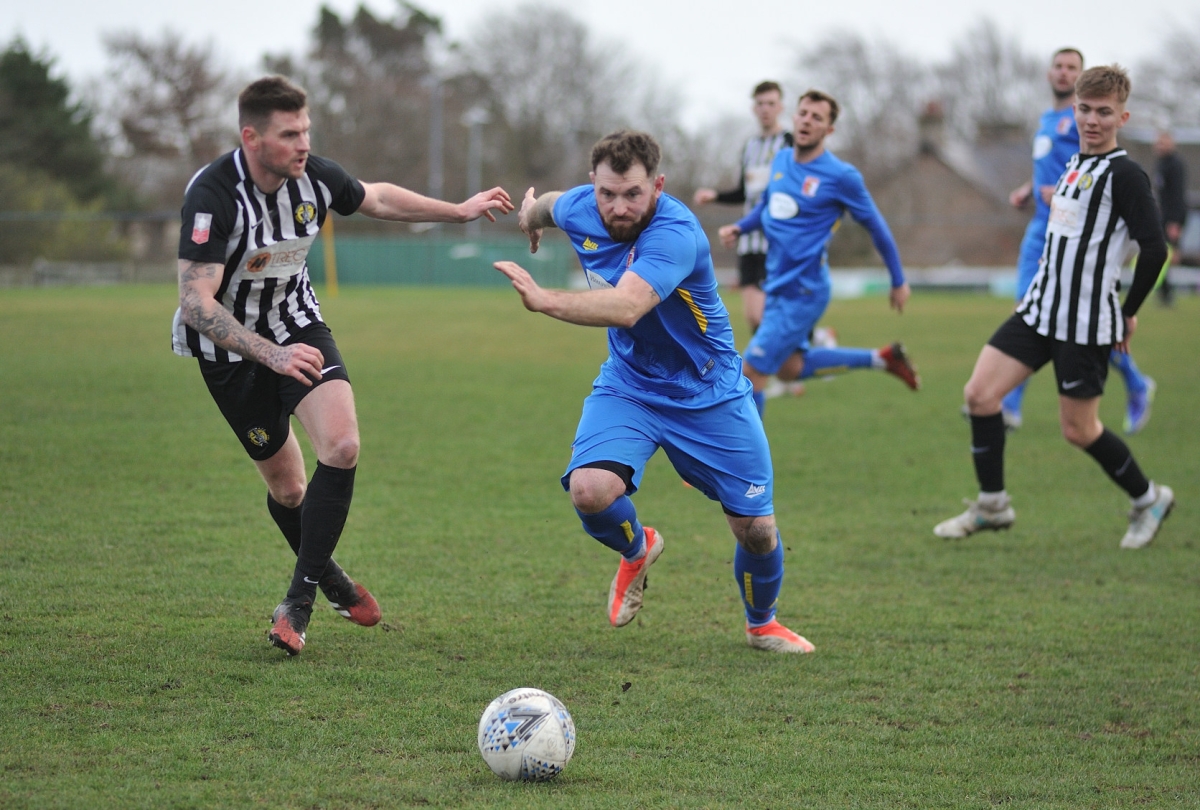 Chris Winn in a sprint for the ball.

RCA travelled up the A1 to take on Whickham at a very blustery First Mortgage Glebe Ground. It would appear that the wind only appears when we are playing.

After a the recent management change at Whickham, things seem to have picked up and before the match they were one position and five points below RCA but with two games in hand. As in our first encounter at Sunderland LGV Park, where RCA won 1-0, another close match was envisaged.

The management team was forced to make one change to the team who won on Tuesday with Chris Winn replacing the suspended Simon Jakab.

RCA took advantage of the strong blustery wind in the first half and were quickly on the attack a ball forward from Guy was controlled by Annang-Colquhoun who cut inside but his shot was blocked by Elliott.

The conditions worsened with the wind picking up and on top of that it started to rain. There was little in the way of entertainment as both teams were finding it almost impossible to string two passes together in the opening stages.

Annang-Colquhoun was causing a few problems with his pacy runs and in the 12 minute was brought down by Agnew on the edge of the box; Guy’s cross into the box was headed away by Galbraith but only as far as Annang-Colquhoun who once again was fouled this time on the left.  Weirs whipped in the cross which was flicked home by Swansbury although it is doubtful that he knew much about it.

The home side tried to rally but, against the strong wind, they found it difficult to get out of their own half. A long ball forward by Howard was picked up by Atkinson but he was unable to test Marrs in the RCA goal.

At the other end Winn forced a corner on the right; Hennis crossed the ball into the box where Davison in acres of space headed inches over the bar.

Within a minute Whickham equalised when a good move down their right saw Atkinson play the ball into the box, a poor clearance fell to Bissett who took the ball down the wing before crossing into the box where the ball slipped past the RCA defence and Young was on hand to curl a shot out of the reach of Marrs and into the bottom corner of the net.

Whickham became a little more adventurous with their passing and when Bissett played in Atkinson he looked certain to score but hit his effort over the bar.

On the half hour an RCA corner taken by Guy was punched clear by Anderson and the follow up shot by Annang-Colquhoun went wide.

RCA conceded a corner under pressure when Charlton looked to be fouled before sliding the ball out of play, Bissett took the kick which he curled toward the far corner of the goal but Errington was on hand to head clear.

RCA were forced to make a substitution in the 39 minute when Charlton hobbled out of the game with a recurrence of a knee injury.

Atkinson looked certain to score in the 40 minute when a long ball out of defence held up in the wind and was played forward by Peareth into the path of Atkinson who looked offside, however he was allowed to continue and it took a brilliant save to turn his low shot around the post.

The final attack of the half went to RCA a throw in on the right was picked up by Guy who laid it off to Allen, he crossed it to Hennis on the edge of the box and he hit a curling first time effort inches over the bar with Anderson rooted to the spot.

The second half was as dour as the first with neither team able to play any fluent football and relying on long ball tactic which never looked like working against two very well drilled teams.

The first real threat of the second half came when Anderson sent a long searching ball forward and it somehow found its way to Atkinson but the Whickham striker volleyed the ball over the bar.

RCA’s first sustained attack of the second half was through Allen who played the ball forward to Carr who played it wide to Weirs whose cross was headed out for a corner by Agnew, Guy took the corner but it was hooked clear by Burrell.

A strong run by Burrell from inside his own half ended with him hitting a tremendous shot which took a wicked deflection out for a corner. The resultant corner caused a bit of a problem in the RCA defence by Captain Swansbury took charge of the situation smashing the ball up field from inside the six yard area.

The game then became even more scrappy with a number of niggly little fouls and little good play. Both teams battled hard right up to the final whistle but the winning goal was never really on the card and a draw was probably a fair result in the end.

In these conditions it was up the defence to stand firm and for the most part they did. It has become a trait of Steve Riley’s team that they are difficult to beat and that is what came through loud and clear today. Everyone once again put in a shift to ensure that the unbeaten run continued.