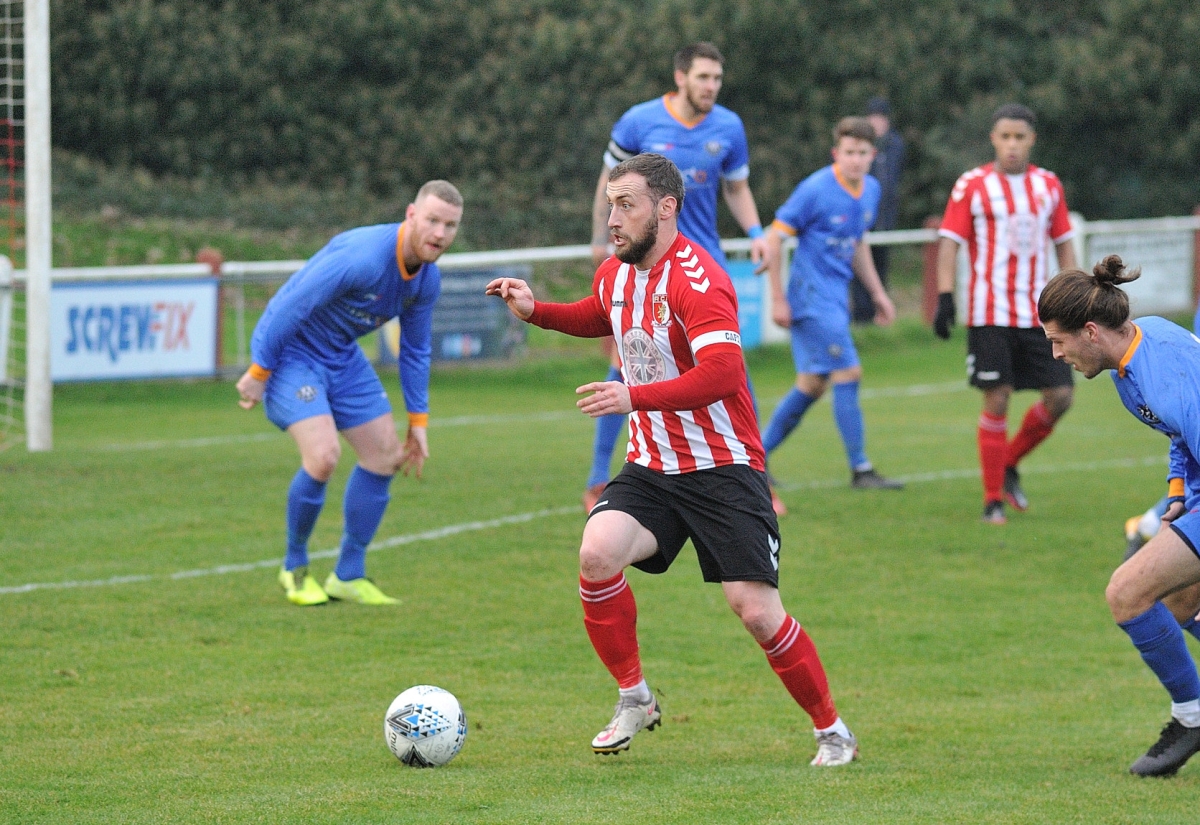 The teams took to the pitch, which once again was in excellent condition. As if on cue sun broke through the cloud setting the scene for a great afternoon of football.

Ashington took advantage of the slope in the first half and went straight on the offensive down the right wing Sampson picking the ball up on the halfway moved unopposed into the RCA half before playing the ball to Briggs who cut inside before unleashing a low drive which flew wide of the target.

RCA's first meaningful attack came three minutes later when Jakab cleared the ball forward to Annang-Colquhoun he played the ball inside to Hennis who picked out Hawkins, unmarked on the edge of the box but his pass/shot was cleared up field by Harmison.

Despite playing up the slope RCA were playing some good attacking football in the early stages of this match and almost took the lead in the sixth minute when Jakab played a good ball forward to Guy, he dribbled past his marker before laying the ball into the path of Annang-Colquhoun but he fired well over.

In the 10 minute RCA won a corner on the right which was taken by Charlton, the near post corner was flicked on by Swansbury to the back post where Errington headed the ball against the post, the ball rebounded to Davison who struck a powerful shot which struck an Ashington defender and although Guy picked up the ball his cross into the box when harmlessly out for a goalkick.

It was all RCA during this period, Swansbury intercepted the ball deep in his own half and sent a well weighted pass forward to Annang-Colquhoun who controlled the ball well before chipping the ball over the advancing Dryden but Coppen was able to get back and clear off the line, however his clearance landed at the feet of Annang-Colquhoun who fired in a low drive which was well saved by Dryden.

RCA continued to apply pressure on the Ashington defence Guy picked the ball up from a Hennis pass and flicked the ball forward for Davison but his effort was blocked by Coppen.

RCA were awarded a freekick when Annang-Colquhoun was fouled on the edge of the box, Hawkins floated the ball into the box where Davison managed to get a head to the ball which bounced about like a pin-ball in the area before the ball was fired wide of the target by Hennis.

The visitors, having withstood the home team’s onslaught, began to get some forward momentum of their own.

A long ball forward from Doyle found Robinson on the left but his cross was met by Errington who headed cleared.

Ashington’s next attack was stopped when Errington fouled Briggs 30 yards out. Briggs took the freekick which was headed away by Swansbury but only as far as Robinson who sent low drive went wide of the near post.

Charlton launched RCA’s next attack down the left when he and Weirs played the ball through the Ashington defence before Charlton crossed into the box but Davison’s glancing header went wide.

Back came the visitors with a fluid move down the right exploiting the space left by Charlton, Briggs picked up the goal kick before advancing into the opposition's box but his cross into the box was blocked by Hawkins and cleared by Jacab.

RCA’s defence was almost caught napping when Robinson took a short corner to the unmarked Anderson on the edge of the box but he curled his effort wide of the far post.

A goalless, but entertaining first half ended as the sun went down and the temperature plummeted.

The home team started the second half well; a freekick on the right was taken by Guy who found Davison inside the area, played the ball to Annang-Colquhoun who slipped the ball back to Davison who pulled his shot wide of the target.

Guy was seeing lot of the ball in the early stages of the second half and when Hennis sent the ball wide on the right Guy sent in a wicked cross which was met by Davison but his powerfully driven shot was brilliantly saved at the foot of the post by Dryden the rebound fell to Davison who uncharacteristically fired into the side netting.

Within minutes Davison forced another superb save from Dryden when he smashed a volley toward the Ashington goal but Dryden managed to palm it away and the follow up cross drifted out for a goalkick.

Ashington were finding it difficult to get any forward play at this time and RCA should have opened the scoring on the hour mark when Guy intercepted a poor clearance and fired in a shot which was parried by Dryden, the ball fell to Charlton whose shot took a deflection off Harmison but fell kindly for Dryden who was able to collect.

As in the first half Ashington survived the early pressure from RCA and as the home team tired the visitors started get more and more adventurous. The introduction of their substitutes was to prove beneficial to their attacking options.

Aziakonou, who had been largely occupied with stopping Guy, suddenly started to have an impact on the game he sent a good ball forward to Johnson who, inside the area, should have forced a save from Marrs but instead fired wide.

Then in the 70 minute Aziakonou again found space in the centre of midfield before playing the ball forward to Johnson who this time hooked the ball over the bar.

A good run down the right by Sampson was halted by Charlton but the ball was picked up by Lashley, he squared the ball to Johnson but Hennis was able to block his shot at the expense of a corner. The corner was whipped in and Hennis headed clear, injuring himself in the process.

The game was settled in the 82 minute when Doyle drilled a ball into the box, it was hooked clear but only as far as Taylor on the edge of the box and he hit a low drive into the bottom corner of the net the first goal conceded by RCA in over 530 minutes of football.

After the goal Ashington shut up shop and RCA were reduced to only one chance, Carr picking up a pass from Hawkins dribbled into the box before setting up Davison but his flicked effort was turned round the post by Dryden.

On another day and with a less capable keeper “Sparky” would have had a hat trick but Dryden produced a man of the match performance to deny him and RCA anything from the match.

On reflection it was match fitness that told in the end, Ashington had the benefit of games under their belt while RCA had not played for 4 weeks and the majority of players had to deal with the after effects of Covid.

This was still another good performance from the team against a well organised Ashington team who will be certainly in the top 5 come the end of the season.

Our next fixture is a Durham Challenge cup fixture away to Crook Town on Wednesday, 19 January 2022. Kick off 7.30pm.