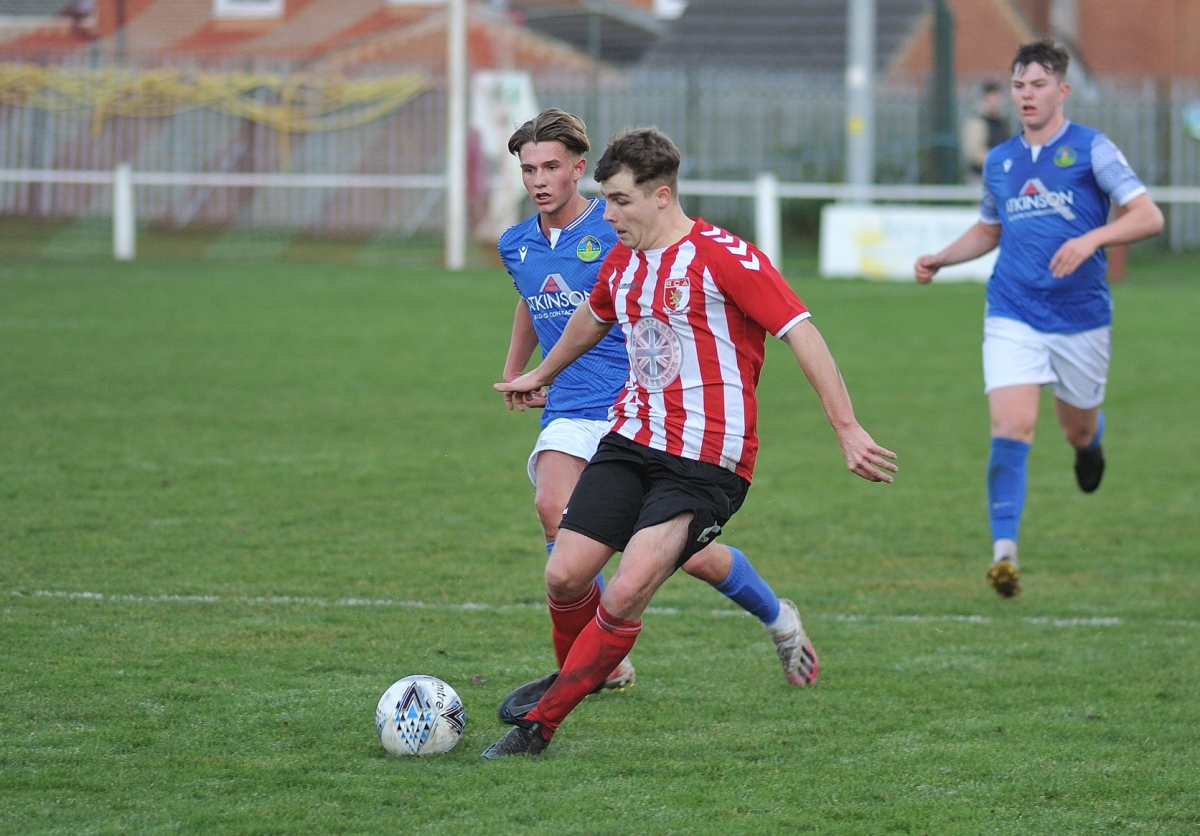 Kieran Charlton sets up a first half attack.

At this time of the year it is unusual to extend a WARM welcome to our friends from across the Pennines but today’s mild weather provided such an opportunity.

Therefore a warm welcome was extended to our visitors Penrith for this Ebac Northern League fixture at Sunderland LGV Park.

A presentation was made to long serving Penrith mascot Bradley Hodgson who is retiring at the end of the season after 17 years to set out on a new venture. All at RCA wish him well and success in whatever he decides to do. There will always be a welcome for him at Sunderland RCA.

The management team recalled Ben Errington and Craig Hennis to the starting line-up against bottom of the table Penrith.

The early morning mist and frost had been burnt off by the sun leaving the pitch in perfect condition for the start of the match. A testament once again to the hard work and dedication of the ground staff, Dave, George, Graham and Norman who have prepared the pitch all season and received complimentary comments from all teams who have played here.

Penrith took advantage of the slope in the first half but it was the home team who had the better of the opening exchanges, in the opening minute Weirs won the ball on the half way line and sent a diagonal pass out to Richardson on the left, he controlled the ball well before crossing into the box where L Brown managed to get to the ball just ahead of Davison to head clear.

The visitors hit back minutes later when Best played a long ball forward to M Brown who cut inside before unleashing a low shot which was well saved by Marrs.

The start of the game was frantic with the ball switching from end to end very quickly. RCA’s next chance fell to Weirs who ran onto a through ball from Guy but his shot was brilliantly saved by Taylor and the rebound was cleared up-field by Moynan.

RCA were awarded a freekick near the touchline which was taken by Guy who picked out Davison at the back post, he headed the ball back across the face of goal to Richardson who smashed a terrific right foot volley towards goal but it was blocked on the line by M Brown.

A number of niggly freekicks interrupted the flow of the game but came to nothing.

Penrith almost opened the scoring with a fluke, Best picked up a throw out from Taylor and was allowed to run unopposed into the RCA half, he sent in a wicked low cross which skipped of the turf forcing a reaction save from Marrs who was happy to parry the ball away and Jakab cleared up field.

Almost immediately RCA did open the scoring when Guy switch play to the right with a delightful ball which found Winn he out maneuvered his marker before clipping the ball into the box where Davison rose above two defenders to delicately head the ball past Taylor into the bottom corner of the net.

The visitors only response was a 25 yard shot from Faustino which flew well over the bar.

RCA’s midfield were dominating the game and when Hennis broke up play inside the visitors half and played the ball out to Weirs a second goal looked imminent, he squared ball to Winn on the edge of the box but he was prevented from getting in a shot with three defenders crowding him out.

Midway through the half and a corner on the right caused mayhem in the Penrith defence. Guy’s cross was mis-headed by Patrick and found its way at the back post, Hennis slid the ball into the path of Richardson whose shot was blocked by L Brown, the rebound was stabbed goalward by Davison and hooked clear by Best.

Penrith were being forced to defend in numbers, a good run down the right by Winn produced another great defensive block by L Brown, unfortunately for RCA the rebound was hit wide of the target by Winn.

Minutes later and L Brown was on hand again to deny Richardson with a well timed block after a freekick by Hawkins was headed into the winger’s path by Davison.

As the game entered its final five minutes, Charlton and Richardson combined to create another opportunity for Richardson and once again his final shot was blocked by L Brown.

In the last minute of the half Errington cleared the ball forward to Guy who dribbled his way into the box but fired his low shot into the side netting.

The half time refreshments in the committee room included the usual Xmas mince pies with mistletoe on top and were, along with the Rich Tea biscuits a particular favourite of Bradley Hodgson the Penrith mascot.

The second half kicked off as the temperature dropped below freezing but RCA’s dominance continued from the start when Charlton on the left played the ball inside to Winn he picked out the run of Jakab on the right and his cross was whipped into the box where Guy, with an open goal inexplicably side-footed the ball wide and Patrick was on hand to clear..

RCA were piling on the pressure and it took some magnificent defending by the Penrith back line to keep the score at 1-0. A shot from Winn from the edge of the box was headed over the bar by L Brown.

The visitors relieved the pressure a little when storey played a good ball through to Armstrong who cut inside two defenders before hitting a terrific shot which flicked off Hawkins for a corner.

From the corner RCA were able to break quickly from Errington’s headed clearance, Guy picked up the loose ball and took the ball forward before squaring the ball to Hennis but L Brown was again on hand to put in a great recovering tackle and Faustino cleared up field.

RCA doubled their lead shortly after this Hawkins played the ball forward to Richardson who again ran at the Penrith defence before crossing into the box where the ball evaded a number of players before reaching Winn at the far post and he had the simple task of side footing into the net.

Both teams made substitutions and it is fair to say that the Penrith substitutions had a significant impact in the final 20 minutes of the game.

With 15 minutes to go Norman played a neat ball over the RCA defence and the pacy, Milburn ran onto the ball, took it into the box but smashed his shot into the side netting.

Penrith continued to push forward looking for a foothold into the game with Armstrong pulling the strings and looking to unlock a solid RCA defence.

The home side was defending deeper and deeper in an attempt to preserve their clean sheet record of recent weeks but was giving the opposition the advantage and if their final ball into the box had been better and the forwards a bit more composed the result could have been a lot different.

The final throw of the dice saw substitute Dean-Norman break forward and his shot hit Jacab and went out for a corner. A short corner almost caught RCA’s defence out and it took the combined effort of Hennis and Jakab to stop Armstrong at the expense of a freekick.

Armstrong took the kick which struck the wall; he then struck the rebound high over the bar.

The referee blew the whistle for full time as the mist started to roll in again and the pitch was starting to freeze.

A fifth clean sheet was achieved by the team but it was a lot harder than some people expected going into the final 20 minutes with Penrith pressing hard for a consolation goal.

Another impressive performance from the lads sees them move into 8th place in the league with 34 points.

Finally to all the Players, Management team, Supporters and most importantly our volunteers: Dave, George, Graham, Norman, Colin, Rob, Francesca and the members of the youth section Paul, Ged, Marc, Dave and Terry, who put in inordinate amount of time and effort for the club, we wish you all "A VERY MERRY CHRISTMAS AND A PROSPEROUS NEW YEAR".

We look forward to seeing you all in 2022 for our first scheduled match of the New Year against our neighbours Ryhope CW on Saturday, 8th January 2022, at Ryhope Recreation Ground: kick off 3.00pm.