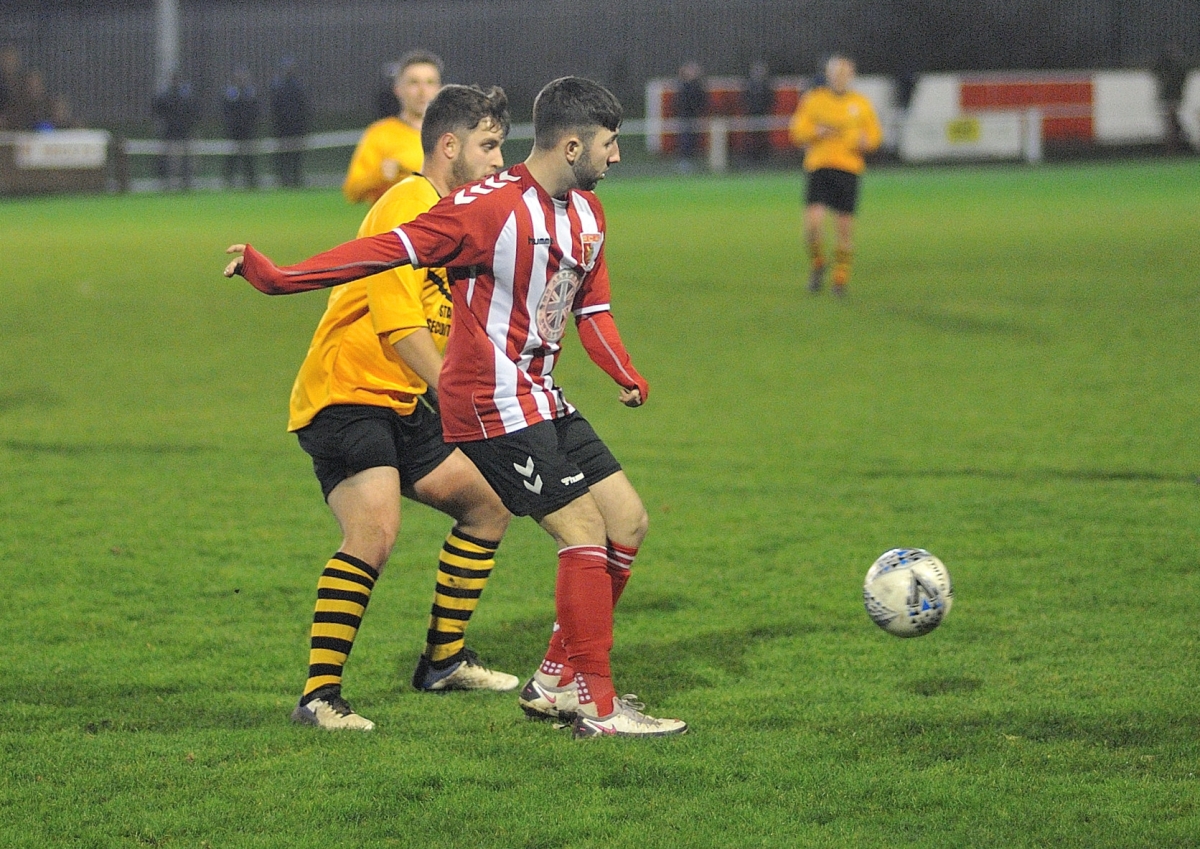 Layton Watts in action during the second half of the match.

Winlaton have had a good start to the season and currently lie second in the Bay Plastics Northern Football Alliance and they defeated Washington in the last round of this competition, while they are two divisions below RCA recent history has shown RCA to play below par in these games.

The management team made changes to the team that drew with North Shields 12 days ago in our last League game. Recent signing Callum Guy was named in the starting eleven to make his RCA debut while Michael Annang-Colquhoun and Taylor Richardson returned to the starting lineup.

The visitors took advantage of the slope in the first half and were quickly on the attack a long ball down the right was whipped in by Best but Jakab was on hand to clear the danger.

RCA took advantage of a poor pass in midfield and the ball was sent forward by Guy to Richardson his low cross caused panic in the Winlaton defence and the ball fell to Davison who smashed the ball against the legs of the on-rushing Staples and the ball was cleared.

The home keeper was called into action when a through ball from Best was picked up by Aiston inside the penalty area but the strikers shot was easily saved by Ball.

A minute later and Best intercepted a pass in midfield and sent the ball out to Candlish, he cut inside before sending a poor shot well over the bar from a promising position

Winlaton should have taken the lead in the 20th minute when Collins produced a pin-point pass which split the RCA defence and was collected by Best, through one on one with Ball he elected to smash the ball low but the RCA keeper managed to get a foot to the ball and it went for a corner.

That let off seemed to spur RCA into action and a minute later a strong run on the right saw Weirs break past Shepherd before crossing to the far post where Winn headed the ball back across the face of the goal and Pentland conceded a corner.

The corner was taken by Guy whose cross was headed away by Wharton, it fell to Carr who hit a tremendous volley which produced a fantastic reflex save from Staples and Jakab following up stabbed the ball over the bar.

The home side had picked up the pace of the game and started to get on top, a throw out by Ball was picked up by Richardson who advanced on the left before laying the ball to Charlton who crossed into the penalty area where Davison was inches wide with a glancing header.

Minutes later and a through ball from Weirs was controlled by Guy on the edge of the box and his cross was once again met by Davison but his effort was well saved by Staples.

As the game progressed, Winlaton were forced to defend but counter attacked to good effect in the final 15 minutes of the half neither keeper was troubled.

Whatever was said at half time definitely had an effect on the RCA team; with the advantage of the slope they poured forward looking to break the deadlock.

It didn’t take long, in the 48th minute Annang-Colquhoun won a corner on the right; Guy took the kick firing it into the heart of the penalty area where Davison rose majestically to head into the top corner of the net giving Staples no chance.

Winlaton responded with a through ball from Best to Aiston and although his shot appeared to be well covered by Ball in the RCA goal the ball bobbled in front of him taking a wicked kick which hit him on the chest but he was able to recover to pounce on the ball at the second attempt.

RCA’s next attack saw Weirs play the ball down the right to Annang-Colquhoun who skipped past his marker before crossing to Davison but his powerful header flew wide of the target.

The home team doubled their lead in the 53rd minute when Annang-Colquhoun pounced on a poor back pass before deftly flicking the ball past the advancing Staples and into the far corner of the net.

It was almost 3-0 when Guy picked up a ball from Carr and hit a thunderbolt of a shot which flew past Staples; hit the foot of the post rebounded onto the back of Staples hit the post again and fell into the grateful arms of Staples.

Winlaton were having to dig deep defensively as RCA looked to settle the game a shot from Annang-Colquhoun was well saved by Staples put it only delayed the inevitable.

Annang-Colquhoun won another corner on the right, this time Guy took it short to Weirs his cross was met by Best who stumbled as he tried to control the ball and his hooked clearance fell to Jakab who smashed the ball into the net from eight yards out to make it 3-0.

Into the last 10 minutes and how Winlaton did not get a consolation goal is beyond me and I expect everyone in the ground.  A swift attack down the left saw Candlish square the ball to Aiston who fired in a shot which beat Ball, crashed of the cross bar and was picked up by Aiston on the penalty spot but a prone Ball somehow stuck a leg out and deflected the Winlaton striker's shot over the bar. A truly superb save.

To add salt to the wound the corner was cleared to Annang-Colquhoun who went on a mazy run which was abruptly halted by the scything challenge of Wharton which earned him a straight red card.

In the dying minutes of the game RCA made it 4-0 when Richardson won a corner on the left, substitute Watts took the kick and Davison again rose highest to direct his header beyond the reach of Staples and into the net.

This was a very good second half performance and demonstrated how far this team has come in a short period of time and another clean sheet making it four in a row which is a massive improvement.

After tonight's result we move into the last 16 of the Durham County “Frank Pattison” Challenge Cup.

The after match refreshments were also well received with the Hot Dogs and beans going down a storm maybe not the Turkey and Stuffing some of the players will be enjoying on Xmas day but it at least it was a change.

(Can we make it 5 clean sheets in a row to end the year)?