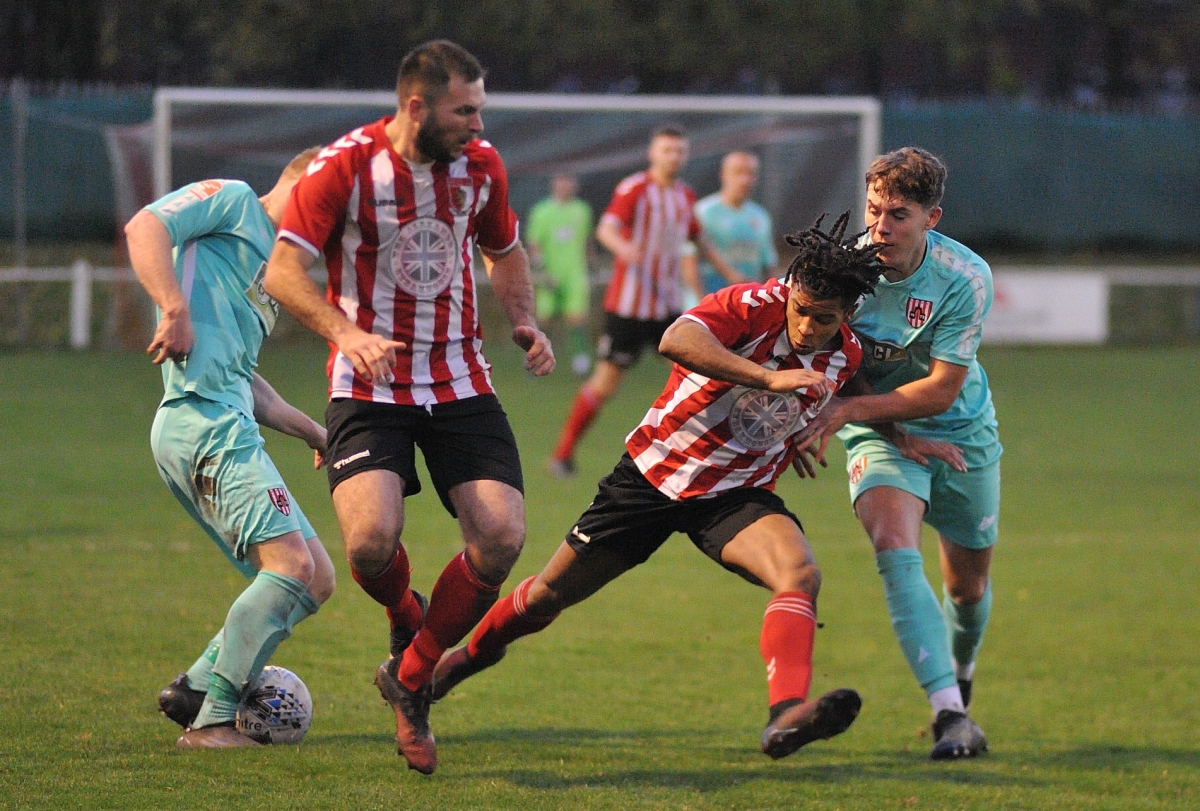 The home team almost fell behind in Guisborough’s first attack, a long ball forward from ex-RCA keeper Robbie Dean was controlled by Preston and played out to Rowe, he squared the ball across the edge of the box to Johnson who was able to turn sharply and fire in a low shot which flew just wide of the upright.

After this initial flurry the game quickly settled down with both teams cancelling each other out. Neither team seemed capable of a final telling ball into the forwards as defenders looked in control.

A clumsy challenge on Annang-Colquhoun gave RCA their first real chance of the game, Hawkins floated the ball into the penalty area and Davison, rising above everyone, headed the ball goalward but Dean was able to collect.

Two minutes later and another freekick to the home side on the edge of the box, Lawrence drove the ball into the penalty area and it was cleared by Rowe, Davison picked up the loose ball but his drilled shot was well saved low down to his right by Dean.

The long ball tactics of the visitors, kicking down the slope, were causing the occasional problem and in the 22nd minute a ball forward by Dillon evaded the RCA defence and Bartliff managed to control the ball inside the box before sending his shot into the side netting.

RCA’s attacks were being stopped with some niggly fouls. Another freekick on the edge of the box this time taken by RCA leading goal scorer Mark Davison, his curling shot cleared the wall but drifted just wide of the upright.

The game became a little more open and a good Guisborough move almost produced a breakthrough on the half hour, Risbrough drove forward out of defence before releasing the ball to Bartliff who crossed into the box to Waites but he headed wide.

This was the visitor’s best spell of the game and they followed it up minutes later when Johnson made a good run down the left before crossing to Preston who was crowded out by Errington and Hawkins and his hurried shot went wide of the target.

A further chance went begging when a corner taken by Risbrough was headed over by Dillon.

Having weathered this mini onslaught RCA created a great chance of the own, a crossfield ball from Charlton was picked up on the right by Weirs, he cut inside his marker, broke into the box before firing in a shot which produced a first class reaction save from Dean.

From Dean’s clearance the ball was played forward by Bartliff to Preston who headed into the net only to be ruled offside.

The 0-0 scoreline at half time in a game of few if any clear cut chances was probably a fair reflection of the game.

RCA started the second half on the offensive, Weirs on the right crossed to the edge of the box where Hennis met the ball but his first time volley was deflected wide by Hood.

A minute later and Annang-Colquhoun picked the ball up in a central position, played the ball to Davison who in turn laid the ball into the path of Hawkins whose shot was well saved by Dean.

RCA brought on Richardson for the ineffective Annang-Colquhoun and he made an immediate impact on the left outpacing the Guisborough defence before crossing into the box but Hood headed away.

The home team looked to be in total command at this point and a fantastic ball from Lawrence sent Weirs clear on the right, his run took him into the penalty where he fired in a shot which was destined for the far corner and it took a magnificent save by Dean who managed to fingertip the ball onto the post and the ball flew past the advancing Richardson and was cleared.

RCA took the lead on the hour mark; a good ball out of defence by Hawkins was played out wide by Carr to the overlapping Jakab who took the ball in his stride before crossing to the far post where Richardson, totally unmarked, headed the ball back across the despairing dive of Dean and into the net.

Although Guisborough looked to rally after going a goal behind they were unable to penetrate a well disciplined RCA defence.

After a bout of substitutions the game became a bit scrappy and predictable with neither team producing any clear chances, Bartliff hit a freekick well over the bar for Guisborough and a good run and shot by Richardson was blocked by Hood.

In the final minutes of the game the visitor threw players forward in an attempt to get an equaliser and an in-swinging corner from Bartliff was cleared off the line by Lawrence.

Another fantastic team display, not the best football seen at Sunderland LGV Park this season, but a gritty performance from the lads nonetheless earned all three points.

It was good to see Greg Swansbury back in the fold and a cameo appearance from Max Allen was also a bonus today. There was also a full 90 minutes for Lawrence who has struggled with injuries this season but certainly put a shift in today.