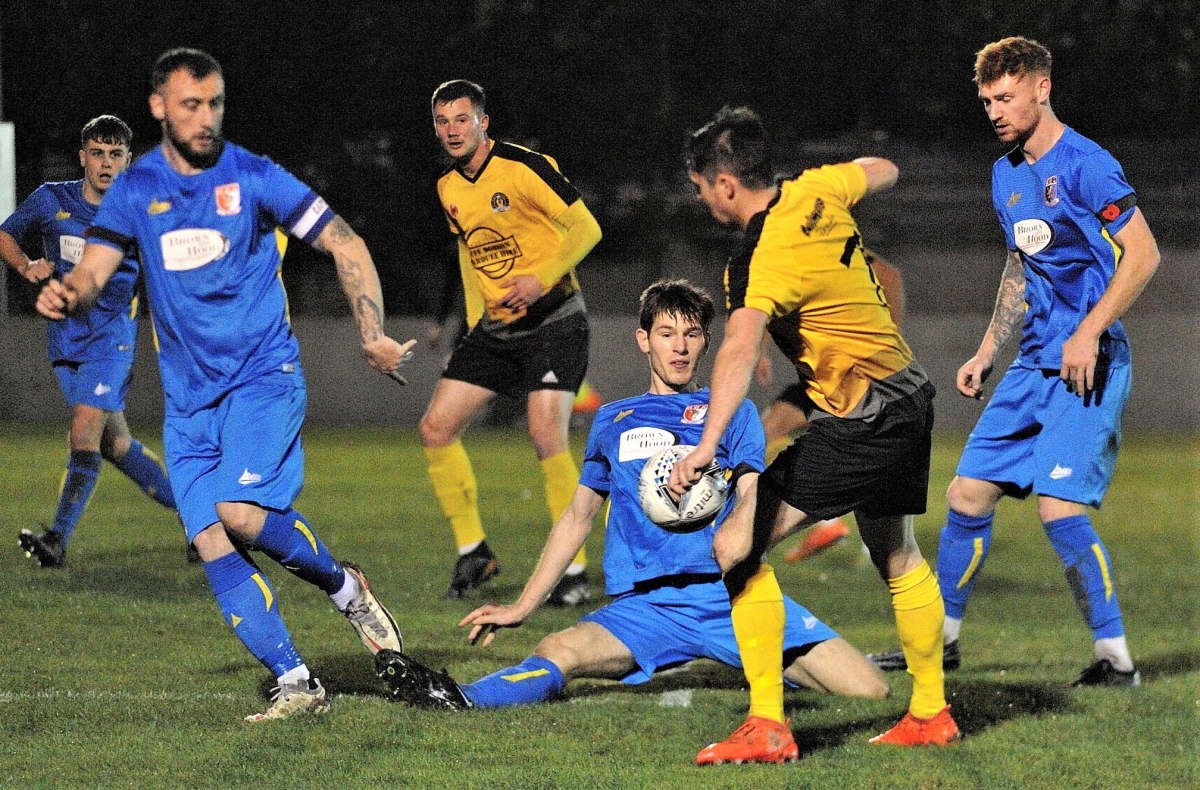 The game kicked off with West taking advantage of the slope in the first half and they were quickly on the attack, a ball down the right from Horwood found Fryatt in space his low cross into the box was met by Blinco but he drilled his shot wide.

A good tackle in the centre circle by Hennis broke up West’s next attack and as the ball bounced invitingly for him he unleashed a terrific volley from 30 yards out which Guthrie did well to save.

Possession was the name of the game for West as they moved forward with purpose but a stubborn RCA defence was holding them at bay during these early exchanges and any balls into the box were being dealt with by Bond in the RCA goal.

A good interception by Lawrence set RCA on their next attack his pass to Carr opened up space on the right, Carr played the ball forward and Weirs showed great acceleration to burst into the box but Brown covering across was able to block the winger's shot at the expense of a corner.

The resulting corner was headed clear by Potter and played forward by Mitchell to Horwood who was fouled on the edge of the box. The freekick was taken by Mitchell but easily cleared by Lawrence.

Horwood made a chance out of nothing picking up a long ball forward he managed to dribble into the box with some clever footwork beating two players but Hawkins managed to get across to block the final shot and Jakab was on hand to clear up field.

West were turning the screw in midfield and RCA, while sticking to their task, were finding it difficult to get hold of the ball.

How quickly things can change in the space of a minute, West attacking down the right were awarded a freekick which was taken by Mitchell, the ball struck the wall and was cleared by Charlton to Weirs on the left he made ground before playing the ball to Annang-Colquhoun whose cross was partially blocked by a defender but fell to Davison on the edge of the box and he fired a magnificent volley into the corner of the net past the despairing dive of Guthrie.

A shocked West took time to respond and were hindered in their progress in the 29 minute when Cobain had to leave the pitch with a head injury after a lengthy spell of treatment and was replaced by Bennett.

The game restarted and West again went on the attack a lovely worked move saw Hegarty and Blinco combine to open up the RCA defence before setting up Bell but he sliced his shot wide from a good position.

For all their possession and shots in the first 45 minutes they had not had a shot on target although Bond did have to dive at the feet of Blinco as he tried to latch onto a through ball from Horwood.

It didn’t take long for that to change in the second half, within a minute of the restart Hegarty was picked out by Brown, he continued his run down the right flank before squaring the ball to Bell who drilled in a low shot which Bond managed to get his body behind to prevent an equaliser.

A minute later and a break by Annang-Colquhoun was stopped at the expense of a freekick on the edge of the box, the freekick taken by Weirs was deflected for a corner which was easily dealt with by Guthrie.

The play was switching rapidly from end to end and when Bond mis-hit a clearance straight to Horwood it looked certain that an equaliser was on its way but he skewed his shot wide with only the keeper to beat.

At the other end a lovely through ball from Jakab split the West defence and found Weirs in space, he hesitated before shooting and allowed Thompson time to get back and block the shot.

RCA were having their best attacking phase of the game and it took some excellent defending to stop them doubling their lead. Carr played the ball forward to Weirs who slipped the ball to Hennis, he played in Annang-Colquhoun who back-heeled it to Davison he laid it off to Hennis on the edge of the box but the West defence managed somehow to close him down and scramble the ball to safety.

Another through ball by Carr saw Richardson almost beyond the final defender but Brown managed to get back to thwart the danger.

West pushed forward in the final 10 minutes with defenders joining the attackers to put pressure on the RCA defence.

In the 81st minute a good ball out from Guthrie found Hegarty 25 yards from goal, he was able to move forward unopposed before striking a great shot which was deflected for a corner, Bell’s corner was headed away by Errington but fell to Hegarty who again struck a terrific shot which Bond managed to save with Blinco in close attendance should the keeper drop the ball.

RCA were being forced to defend in numbers in the final five minutes as the home team threw everything at them in an attempt to snatch something out of the game, however it was the visitors who almost added to their tally when a massive clearance fell invitingly into the path of Davison but his shot was blocked and Guthrie managed to clear.

The final chance of the game fell to West deep into injury time and innocuous looking cross from Hegarty dipped late and Bond under extreme pressure managed to tip the ball over the bar before being barged into the net.

The resulting corner was cleared and the referee blew the whistle for full time.

This was an excellent team performance from RCA, they were resilient and stubborn in defence, they broke with purpose and more than anything they worked as a team. From front to back they defended as a unit and from back to front they attacked as a unit.