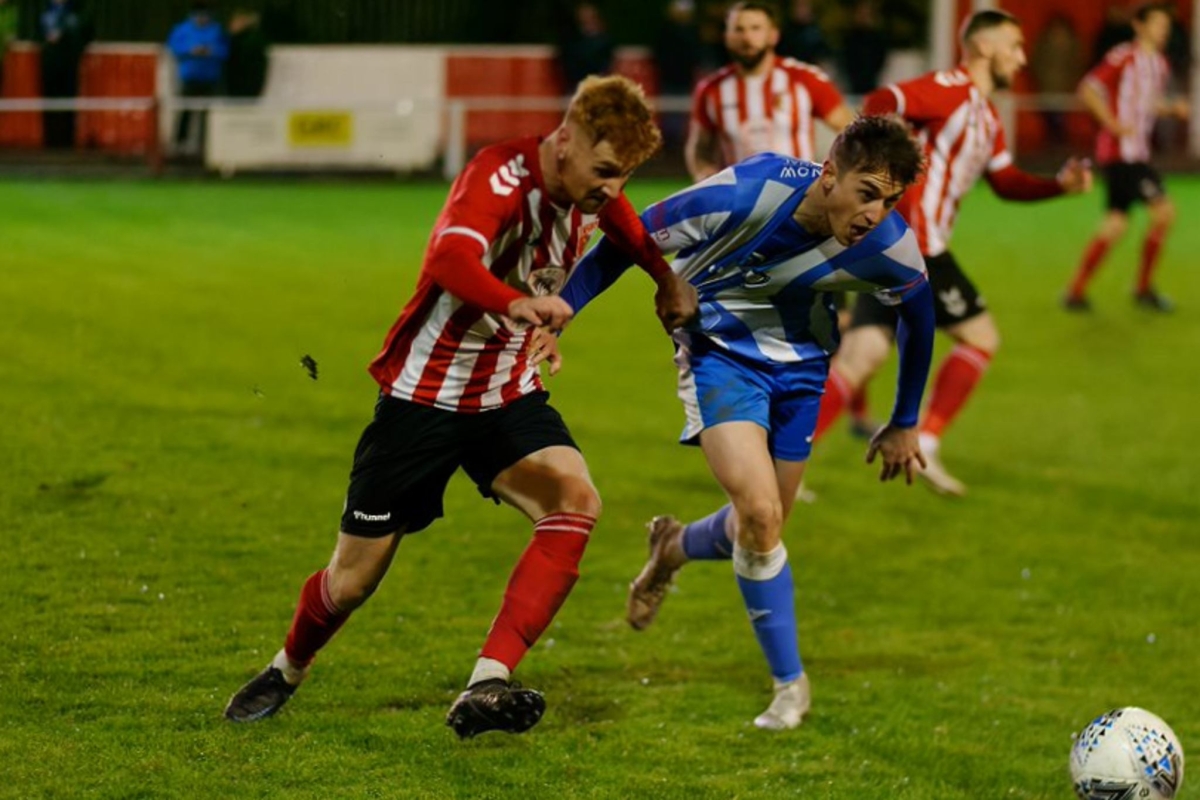 The Seahorses took advantage of the slope in the first half but it was the home side that created the first opportunity when Hennis played the ball wide to Watts his cross was met by Davison but his downward header was saved at the foot of the post by Lister.

Within two minutes RCA took the lead when a poor clearance from Lister was picked up by Davison who, with time and space, put in a low driven cross which was parried by Lister and in the following melee on the goal line ex-Whitley Bay striker Annang-Colquhoun stabbed the ball into the net.

A good move down the left by the Bay had RCA defence backpedalling as Dunn slipped his marker before playing the ball to Speed but he snatched at his shot and it flew wide of the target.

RCA doubled their lead a minute later, Bond’s goal kick was flicked on by Winn into the path of Richardson who outpaced the “Bay” defence before striking a powerful shot which Lister could only parry out and Annang-Colquhoun was on hand once again to tap home from close range.

It could so easily have been 3 -0 in the 17 minute when a Jakab clearance was picked up by Davison on the edge of the box, he made space before drilling in a low shot which Lister did well to turn round the post for a corner. Watts took the corner which was met by Davison but his header flew over the bar.

A minute later and Davison was in the thick of it again this time flicking on a floated clearance from Hennis into the path of Richardson who squared the ball to Annang-Colquhoun who in turn laid the ball to Watts who thundered a low shot toward  the bottom corner but Lister made an excellent save to deny RCA.

A break on the right by Orrell was not picked up by the RCA midfield and his well placed cross was met by Coulson but he could not direct his header on target, a let off for the home side.

RCA were enjoying a lot of possession and causing problems with their pace on both wings, a good cross into the box from Watts was met by Davison but his first time effort went narrowly over the bar.

As the game settled down Whitley Bay started to see more of the ball and it took some good defending by Jakab to prevent Coulson when he dribbled into the box, blocking his cross, the resulting short corner was picked up by Dunn who sent in a wicked low cross which was cleared by Hennis.

A minute later and Hennis was on hand again to block a terrific cross by Coulson.

The visitors encouraged by this spell of pressure pushed forward were unlucky not to reduce the arrears when Parker played the ball forward to Orrel he hooked his shot beyond Bond but Watts was on hand to clear off the line.

Hennis and Winn combined to set up RCA's next attack breaking down a Bay attack and switching play to the right for Watts who whipped in a low cross to Davison who rifled in a shot which was well saved by Lister.

Whitley Bay pushed forward at the game entered the final minutes of the first half and created two excellent chances, the first when McFarlane drove forward down the right before cutting the ball back to Ex-RCA midfielder Dorward whose volley struck Weirs on the head and went out for a corner. The resulting corner was punched clear by Bond.

Two minutes later and Coulson broke down the left before crossing into the box where Bond again under pressure punched clear, the ball fell to Dorward but his shot was blocked at the expense of a corner which was easily collected by Bond.

The second half began in much the same way as the first half with RCA creating numerous chances, Winn intercepted in the centre circle before playing the ball to Watts who hit a well placed shot that struck Lister in the chest and he was able to get to the rebound before Davison.

A minute later and a perfectly weighted ball from Hennis released Richardson on the left; he cut inside, advanced into the box before curling a shot beyond the outstretched arms of Lister but the ball struck the base of the post and flew out for a throw in.

The game switched to the other end with Dunn making space on the left before playing the ball to substitute Clark on the edge of the box, his shot was blocked by Hawkins but the ball looped towards the goal and it took a brilliant save by Bond to tip the ball over the bar.

A poorly timed challenge by Watts on Clark resulted in a free kick on the edge of the box; Orrell curled his shot over the bar.

On the hour mark RCA Hennis broke up another Bay attack and played the ball forward to Winn. He found Davison on the edge of the box, his shot was blocked by Taylor, the rebound fell to Hennis who side stepped a challenge before smashing his shot into the body of Sherrard and the ball was cleared up field.

RCA extended their lead in the 65 minute when Bond played a long ball forward, Davison, as he had all night, got his head to the ball first and Richardson picked up the loose ball inside the penalty area before coolly slipping the ball past Lister despite the keeper getting a hand to the ball.

Davison, injured in the build up to the goal, was later replaced by A Croft, both teams brought on substitutes as the game fizzled out as RCA managed the final 15 minutes of the game with very few scares.

This was an early Christmas present for the team as we enter November by moving into the top half of the table.

A solid team performance, work rate was excellent throughout and there was the added bonus of a clean sheet.

Our next up a home match against top of the table Consett on Saturday, 6 November 2021; Kick off 3.00pm.