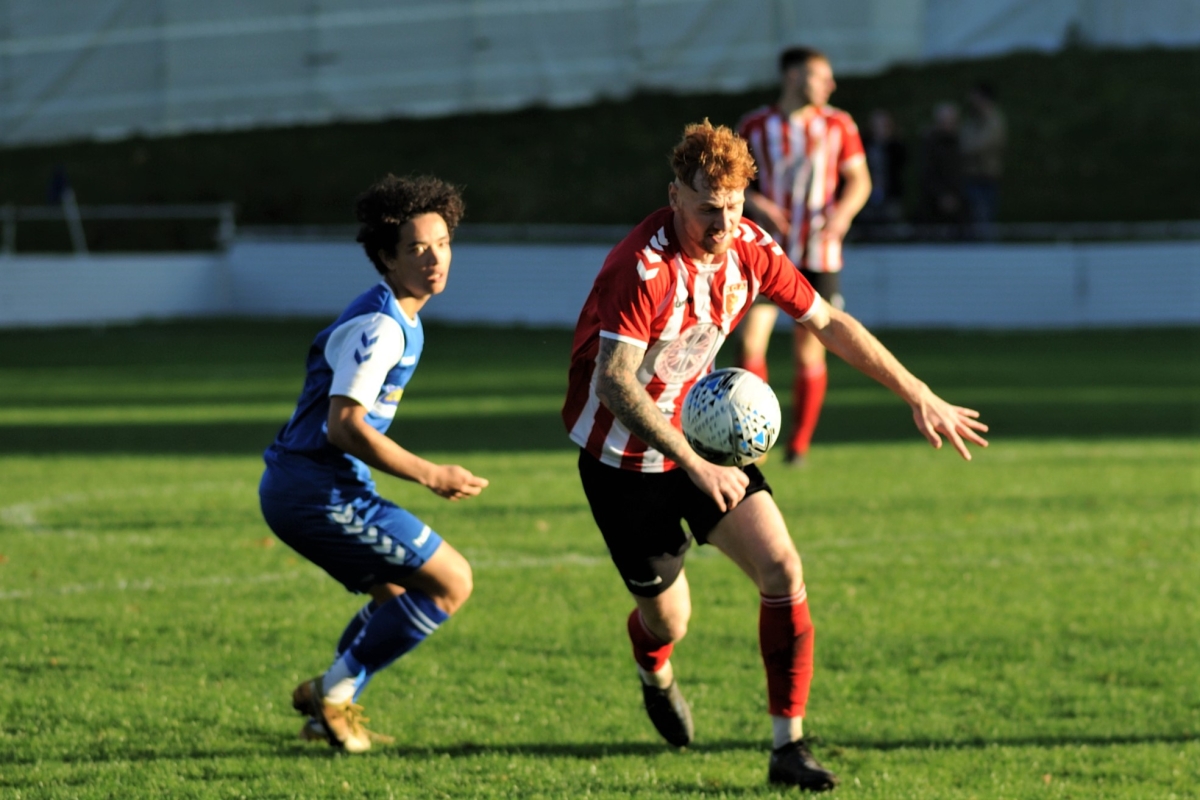 Despite the persistent rainfall the pitch looked in decent condition, if a little on the heavy side, the sun came out an hour before kickoff to make it ideal condition for players and spectators alike.

In the opening minutes a long ball out of defence by Frazer found Hutchinson on the edge of the box, he cut inside to power in a left foot shot which Bond did well to save diving to his right.

A break down the right by RCA heralded their first meaningful attack. Weirs played the ball to Hennis who found Watts on the right, his whipped cross into the box was inches away from the foot of Davison who would have surely opened the scoring.

The resulting goal kick led to Thornaby opening the scoring in the 12 minute, the kick saw Giraud intercept the RCA clearance and the ball was slid into the path of Hutchinson who controlled the ball before hitting a powerful drive into the far corner of the net.

The home team were denied a second goal in the 21 minute when good play by Flounders and Hutchinson on the left set up Giraud but his well struck shot was saved by Bond.

RCA reacted to this scare immediately with Jakab sending a lovely weighted ball to Winn on the right, he beat his marker before crossing toward Davison but Flounders managed to hook the ball away.

Bond in the RCA goal was called into action again five minutes later making a good save from Beddow after a mix up in the defence.

The visitors began to get into the game more as the half hour approached and were unlucky not to score when another whipped cross by Watts was met by Annang-Colquhoun but his shot was blocked by Mazfari and cleared by Moore.

A minute later and a quick throw in by Weirs to Watts was returned to Weirs who crossed to the far post where Davison met the cross but missed the target by inches.

It was pretty much one way traffic at this point as RCA went in search of an equaliser. A great through ball by Hennis found Watts inside the box; he sent two Thornaby defenders the wrong way before sending his shot just the wrong side of the post.

While RCA sere applying a lot of pressure on the Thornaby defence the final ball / shot was not clinical enough. However they were causing problem with crosses from dead-ball situations.

In the latter stages of the half  RCA were awarded a freekick on the right Watts curled the kick into the box and Davison rose magnificently to power a header into the net with Mazfari rooted to the spot.

The second half opened fairly quietly with little in the way of goalmouth action until the 50 minute when Carr broke forward before passing the ball to Winn who then crossed into the box where Davison headed the ball straight at Mazfari.

Thornaby seemed to wake up after this effort and started to play some good football moving the ball forward quickly and putting the RCA defence under pressure.

It paid off in the 55 minute when Flounders broke up an RCA attack before sending the ball forward to Giraud who was well tackled by Jacab but the ball fell to the advancing Moore who smashed his shot into the net to make it 2-1.

The home team was well on top as the game opened up and RCA were a little disjointed.

A good move down the right by Connor resulted in his cross being met by Beddow but his shot struck the post before being cleared by Weirs.

Within two minutes they struck the post again when Flounders cleared the ball up field and Giraud tried his luck from 20 yards out, the rebound was picked up by Jakab.

In the 65 minute a corner on the right was met by Guru but his looping header hit the top of the crossbar and went out for a goalkick.

Within minutes Thornaby extended their lead, a short corner caught the RCA defence flatfooted and  Davis was able to give the ball, unchallenged to the unmarked Giraud who found Guru and he in turn laid the ball into the path of Beddow who picked his spot to make it 3-1.

At the other end RCA had a strong penalty appeal turned down when Hennis headed a Watts corner towards goal and it looked to be going in, but substitute Hogan cleared off the line with the use of his arm, unseen by the referee or her assistant.

Into the final 10 minutes of the game and RCA seemed to get a new lease of life, Richardson outpaced the Thornaby defence but his cross was cut out by Guru then a through ball by Hennis was poked inches wide of the post by Winn and cross into the box by Hunter was headed into the side netting by Davison.

Thornaby, having looked home and dry, started to look nervous and RCA were trying to take advantage, as the game entered injury time RCA were awarded a corner which Watts took this time Hennis made no mistake sending his flying header into the net to set up a nervy finish to the game for the hosts.

The visitors threw everything at the Thornaby defence in the remaining minutes but it was too little too late.

This was a game of fluctuating fortunes, Thornaby started well but RCA looked to shade the first half and were unlucky not to be ahead, however the second half belonged to Thornaby until the penalty appeal was turned down and RCA then looked to get back on top. As Jimmy Greaves once said “it’s a funny old game”.

RCA always look like they will create chances and look likely to score goals. The problem is at the other end where we consistently concede simple goals.

We seem to switch off and not react to the threats posed by the opposition or react too slowly to them.