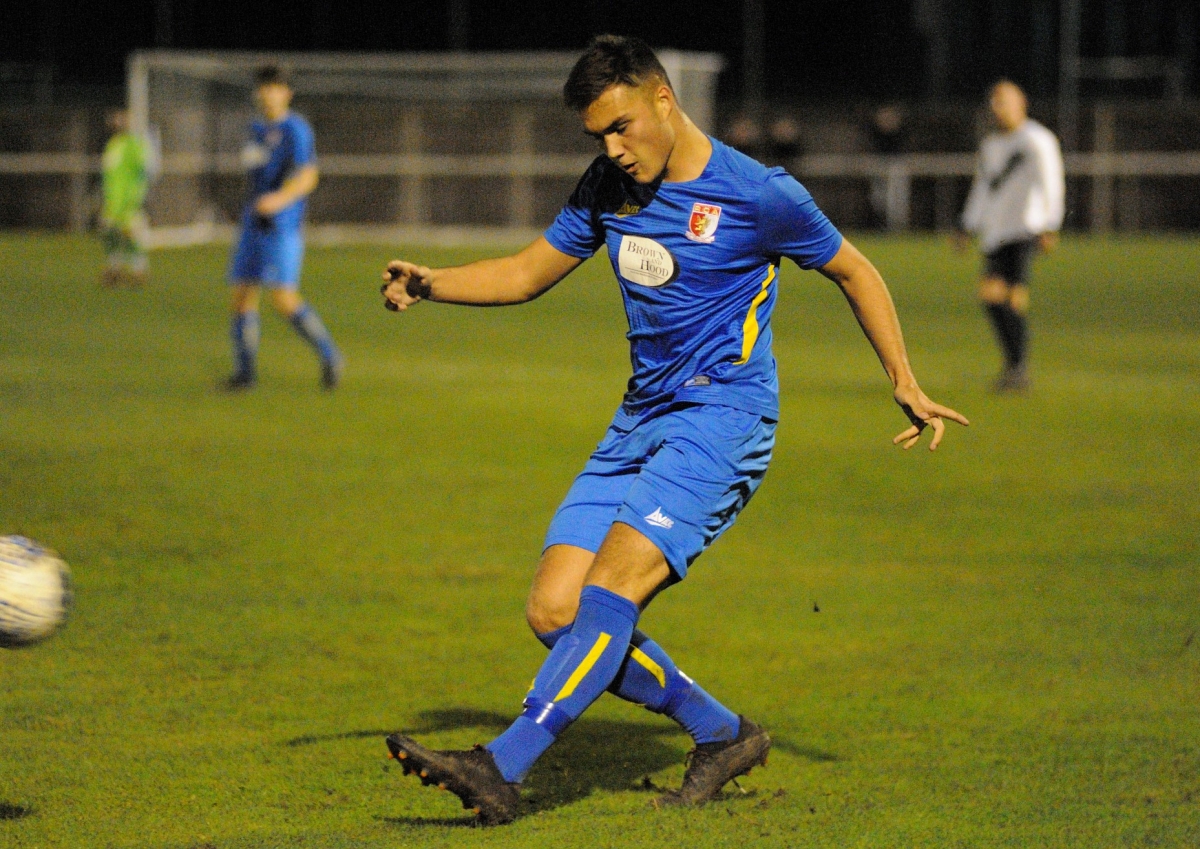 The game kicked off on a warm sultry evening, the forecast rain never materialised and although the pitch was a little on the sticky side it was in good condition.

Ashington started the game by far the better side pushing RCA onto the back foot and forcing them to pump long balls forward.

In the fifth minute Ashington took the lead, when Briggs intercepted a Richardson pass across the 18 yard box and calmly slotted the ball past the advancing Ball.

Within minutes of going behind RCA were unlucky when a whipped cross into the box by J Croft was met by the head of Weirs and it took a magnificent save from Dryden, palming the ball onto the post, to deny RCA an equaliser.

The home team picked up the pace again and a good ball from Sampson found Doyle who cut the ball back to McCorrigan but he fire over the bar.

Sampson than had a good chance when Coppen played the ball wide the Ashington full back cut inside but his shot flew across the face of the goal and out for a goal kick.

RCA’s only success seemed to stem from the left with Richardson and J Croft combining effectively, a cross into the box from the left was met by the head of Annang-Colquhoun but went harmlessly wide.

Dryden had to be alert a minute later when he had to palm away a Coghlan in-swinging corner which was dipping under the bar.

The play was switch quickly to the other end by Coppen who found Robinson on the left, his early cross was met by McGorrigan who connected well with the cross but Ball pulled off a magnificent save.

Ashington were starting to dominate and almost scored a fluke goal when the ball was played into the box by Doyle, Ball saved the initial shot by McCorrigan with his feet but the ball rebounded off the Ashington striker and flew over the bar.

A break by Burlace on the right put the home defence under pressure when his cross into the box was scrambled away by Anderson, the ball fell to Annang-Colquhoun who squared it to Coghlan but his curling shot went inches over the bar.

Coghlan was close again a minute later when Richardson whipped in a cross which Coghlan hooked goalward but Dryden was able to get down to save at the foot of the post.

While the home team kept possession well it wasn’t until the 44 minute that they broke down a stubborn RCA defence Sampson played the ball in to Briggs who sent a defence splitting pass into the path of Robinson and from 10 yards out he placed the ball out of the reach of Ball in the RCA goal.

The Colliers made a fantastic start to the second half scoring after only 35 seconds of the restart. Doyle and Sampson combined in midfield before sending the ball wide to McGorrigan who crossed the ball into the box where Robinson, unmarked was able to smash the ball into the net.

RCA responded through Richardson who made a solo run down the left before firing his shot straight at Dryden.

The visitors were being pulled apart during a scintillating spell of football by the Colliers who looked to spray the ball about the park without any noticeable effort.

With an hour gone Annang-Colquhoun forced a corner on the right, substitute Hunter took the kick which was met at the back post by Jakab who headed the ball into the net.

In the 70 minute a through ball from Hennis was flicked by Weirs inside the box towards Allen who looked to be knocked off the ball but the referee waved away the appeals for a penalty. RCA having made all three substitutes were reduced to 10 men when Allen was forced to limp off the pitch in some discomfort.

For some reason this seemed to galvanize the visitors as they tried to get something from the game.

Ashington though were able, with the spare man, to knock the ball around and if it wasn’t for some magnificent saves from Ball in the RCA goal they could have added to their tally.

Briggs was the instigator of the Colliers best chance in this period playing a wonderful through ball for McGorrigan but he was stopped by the onrushing Ball who smothered the ball.

Within a minute RCA claimed their second goal when a long kick out by Ball was met by Burlace who whipped in a cross which was hooked home by Davison to make it 4-2.

Ashington exploited the RCA defence and when Robinson played the ball thorough for sub Cowburn he just had to stroke the ball into an empty net but a brilliantly piece of defending saw Jakab clear the ball off the line. Robinson headed the resulting corner well wide and the game ended 4-2.