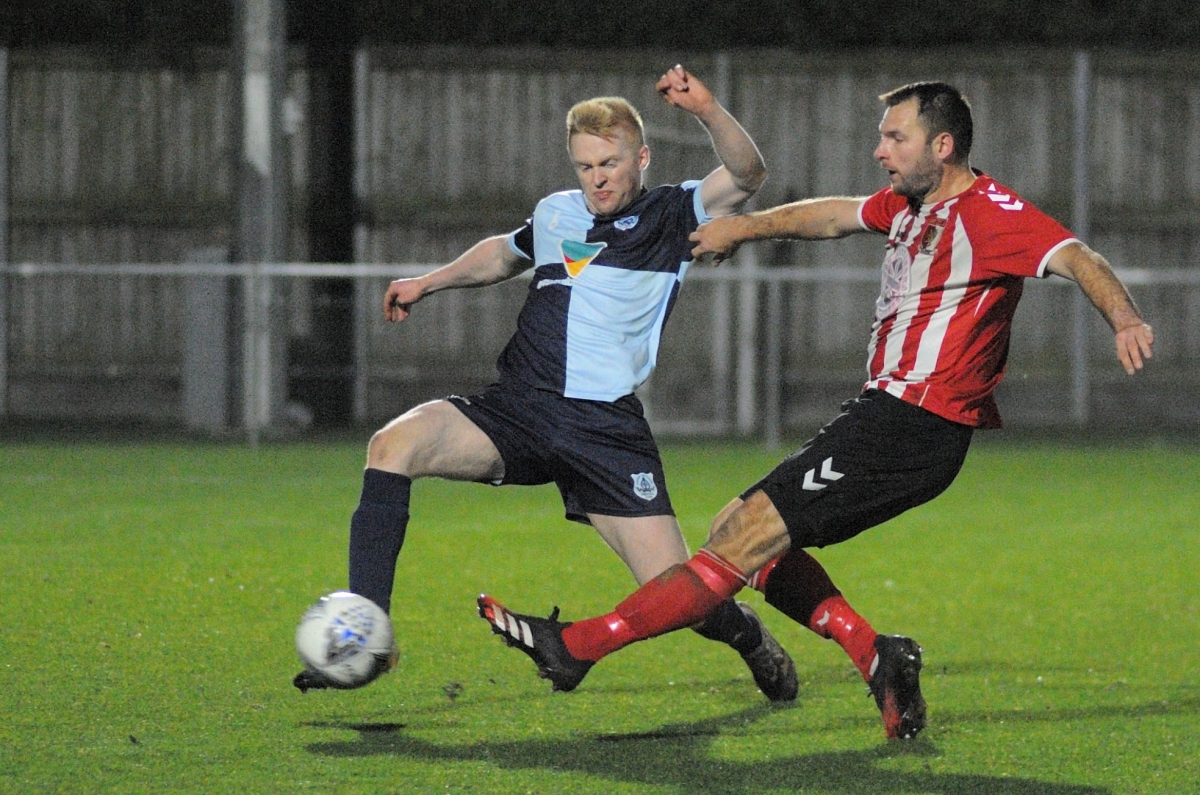 The lads made the trip to the newly named “Voneus Heritage Park” to play Bishop Auckland in this Ebac Northern League Division I clash.

So much has changed since we clashed in the Extra Preliminary round of the FA Cup when RCA ran out convincing 5-1 winners. Bishop have a new manager in Chris Hardy and a much changed team, while RCA have also lost a few players and gained others. Harry Dunn took charge for the final time tonight and we wish him well in his retirement.

The pitch looked in good condition after the recent rain and everything was set for an entertaining evening of football. If you didn’t fancy watching this one there was always the clubhouse where some international was taking place on the big screen.

The management team made two changes to the team which was beaten by Crook on Saturday. Into the team came Joshua Croft and Taylor Richardson to replace Michael Coghlan and Michael Annang-Colquhoun.

RCA started well taking the game to Bishop from the off and in the second minute a long ball forward from Ball was chested down by Davison into the path of Watts who made ground down the left before sending a measured cross onto the head of the advancing Davison but his header went wide of the post.

The visitors continued to press forward and maybe had a shout for a penalty in the sixth minute but the referee awarded a free kick to Bishops.

However they didn’t wait long to get their rewards for an enterprising start to the game, Allen started the move from deep inside his own half, playing the ball forward to Burlace who dropped it off for Watts, he found Davison who turned and played a defence splitting pass into the path of Richardson who raced clear before shooting, Liversedge did well to stop the shot but the ball rebounded to Richardson who slotted into an empty net.

Bishop Auckland took all of four minutes to find an equaliser as the RCA defence reacted too slowly to a quickly taken short corner which found Murphy unmarked, he clipped in a low cross which was flicked over the heads of the RCA defence by Waters and into the top corner of the net. A truly incredible goal if he meant it.

From the restart RCA almost regained the lead when a cross into the box from J Croft was controlled by Davison but his well struck shot shaved the outside of the post.

The game became very scrappy as both teams were guilty of poor passing and the game became a midfield battle. Any long balls forward were easily dealt with by both defences.

Bishops took the lead when Waters picked up a poor pass before switching the play to the left wing, Miller played the ball into space for Pinder to cross into the box where Stevens had time to control the ball before calmly placing his shot into the bottom corner of the net.

Once again the game became a very tense and scrappy affair. Both teams were playing fast slick football but the passing left a lot to be desired with interceptions and unforced errors the order of the day for the remainder of the half and neither keeper was called upon to make any sort of save.

The second half saw Bishops pushing forward and in the 48th minute a great through ball from Pinder found Miller on the right and he delivered a great cross into the box which Jakab was happy to head out or a corner.

Two minutes later and a forward ball by Nelson was played out to the left by Pinder and once again Miller picked up the ball and ran at the RCA defence dribbling past two defenders before crossing from the byline into the box and it was only the timely intervention of J Croft which denied Bishops their third goal.

RCA then made a number of substitutions with Annang-Colquhoun, Weirs and Coghlan replacing Burlace, Watts and J Croft.

Within a minute of the final substitution RCA were level, a long ball forward by Ball was headed towards the left wing were Carr picked up the ball before playing it to Richardson, he sailed past his marker before sending in a curling 25 yard shot which dipped under the crossbar and into the net with Liversedge well beaten.

From the kick off Coghlan won the ball on the half way before playing it forward for Davison but his shot from the edge of the box went narrowly wide.

The visitors were putting pressure on the home team and in the 83rd minute they were caught out when Annang-Colquhoun cleverly intercepted a pass before sending the ball forward to Weirs, he in turn played a ball into the path of Davison who, although under pressure from Poole, managed to get in a shot which flew past Liversedge and into the bottom corner of the net.

The excitement continued late into the game as a through ball from Suddick in the 89th minute was played into the path of Pinder by Murphy but the ex-RCA player hooked his shot inches wide of the upright.

Straight back down the other end when a Carr throw in was flicked on by Davison and somehow found way to Richardson who beat the offside trap to break clear of the Bishops defence and inside the box with only the keeper to beat for his hat trick he smashed a low shot which hit the outstretched foot of Liversedge and out for a corner.

After two successive defeats this was a good win for the lads and these three points could be invaluable at the end of the season.

The substitutions made all the difference tonight with all three contributing to the second half goals which secured the win.