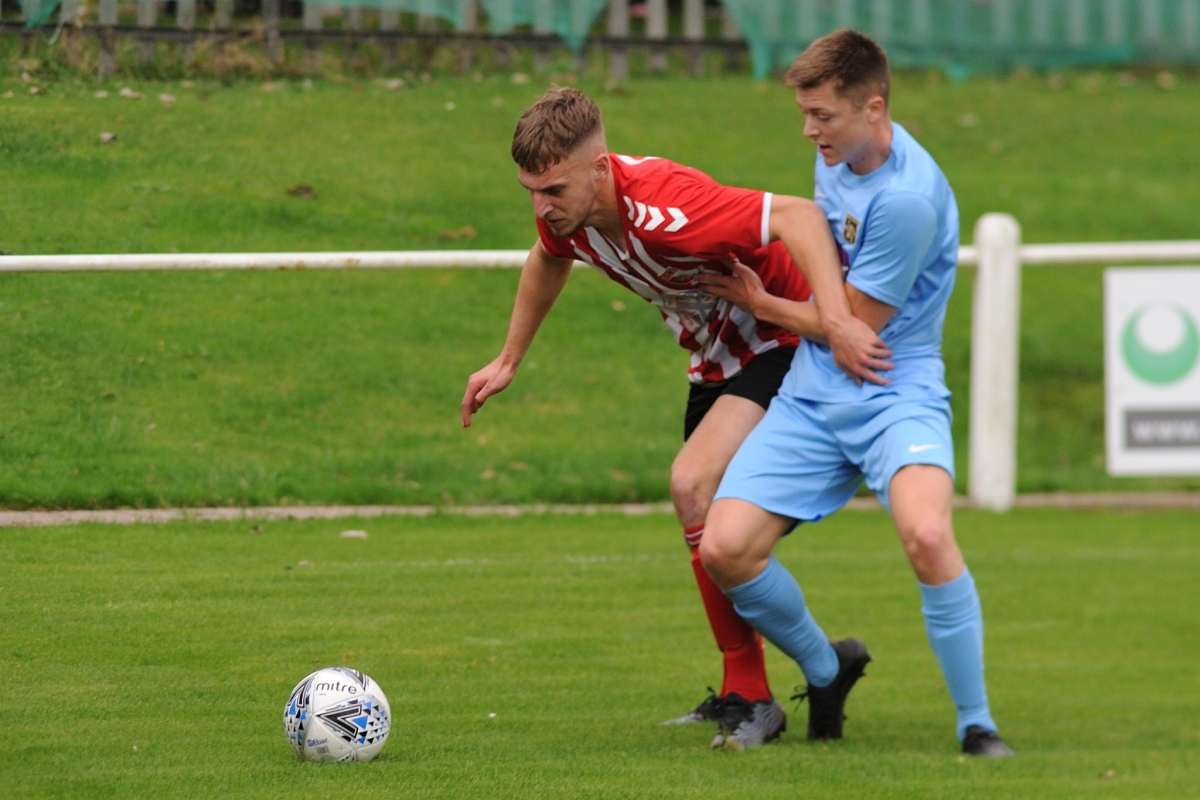 RCA goal scorer Ben Errington competes for the ball during the first half of the match.

We welcome newly promoted Crook Town to Sunderland LGV Park for today’s EBAC Northern League Div I fixture. The visitors have had a very good start to the season and would be no doubt tough opponents having beaten Penrith last Saturday.

The management team made two changes to the team that suffered defeat at Penrith, with Mark Davison and Jonathon Carr replacing Craig Hennis and Taylor Richardson. New signing Matthew Weirs was named as a substitute.

For the first time this season RCA had the advantage of the slope in the first half and whilst they had the first meaningful attack of the half when Burlace was released on the right by Coghlan his cross into the box was inches in front of the outstretched foot of Davison.

Crook immediately responded pushing players forward and putting pressure on the RCA defence. A good ball by Nicholas found Fielding on the right and he did not hesitate in shooting but Jakab was able to block the shot and Carr cleared up field.

The visitor's next foray into the RCA half saw Elgie and Hume combine to set up Reay with a chance but his well struck shot was easily saved by Ball.

With only nine minutes gone Crook had their third shot on goal when Hume picked up the ball midway inside the RCA half moved forward unchallenged before firing in a low drive which went narrowly wide.

RCA were reduced at this time to sending long balls forward and had a great chance when the ball fell to Davison, his shot was blocked by Johnson but the ball fell to Annang-Colquhoun who mishit his shot and the ball trickled through to Skelton.

A minute later and a crossfield ball from Burlace was well controlled on the left by Watts who whipped in a low cross which was met by Annang-Colquhoun six yards out but he managed to knee the ball over the bar.

Crook took the lead when a poor clearance was picked up by Gavin who floated in a cross, over the head of Errington, to find Hewitson on the edge of the six yard box and he stabbed the ball home.

The lead didn’t last long as, Burlace won a corner on the right, Coghlan sent the in-swinging corner toward the far post, where Skelton could only palm the ball down and in the goalmouth scramble that followed the ball was bundled over the line by a combination of Watts, Errington and a defender with Errington claiming the final touch.

This seemed to galvanise the RCA team and they pushed forward with Davison and Coghlan both testing Skelton in the Crook goal but he was up to the task pulling off two good saves.

Back came the visitors having weathered the storm and a good run on the right by Fielding resulted in a corner which was curled to the far post and it took some good defensive work by Allen to prevent Hewitson from adding to his tally.

As the half came to a close a Coghlan freekick was headed wide of the post by Jakab.

As in previous games RCA conceded within five minutes of the start of the second half, again a ball into the box was only partially cleared by the RCA defence and the ball fell to Reay who struck a beautiful volley into the top corner of the net.

While RCA tried to get back into the game their build up play was slow and allowed the Crook defence time to get into position. That said they did create a great chance in the 55 minute when Burlace on the right was give space to cross the ball in to Davison who made room to shoot but his effort was deflected wide.

Two minutes later Annang-Colquhoun beat two defenders before passing to Coghlan on the edge of the box, he laid the ball into the path of Carr but his shot was well saved by Skelton.

The game became bogged down in midfield with a number of fouls being committed which slowed down play.

New signing Matty Weirs was introduced to the game and almost got RCA level as he ran onto a cross before firing in a low shot which Skelton did well to hold on to with Davison ready to pounce.

In the 80 minute RCA were awarded a corner on the left, the ball was swung into the box but easily hooked clear by Johnson, the ball reached the half way line where Burlace looked to have time to pump the ball forward but instead was caught in possession by Nicholas who ran the ball forward holding off Burlace before slotting the ball past Ball and into the net.

As the game entered the final minutes there were few goalmouth chances as Crook shut up shop and stopped the efforts of RCA to get back into the game.

This was by no means a classic and RCA looked to be beaten by a more physical and resilient team as Crook looked like the team who wanted to win.

RCA for all their possession could not break down the solid defence of Crook and when they did they found Skelton in magnificent form.