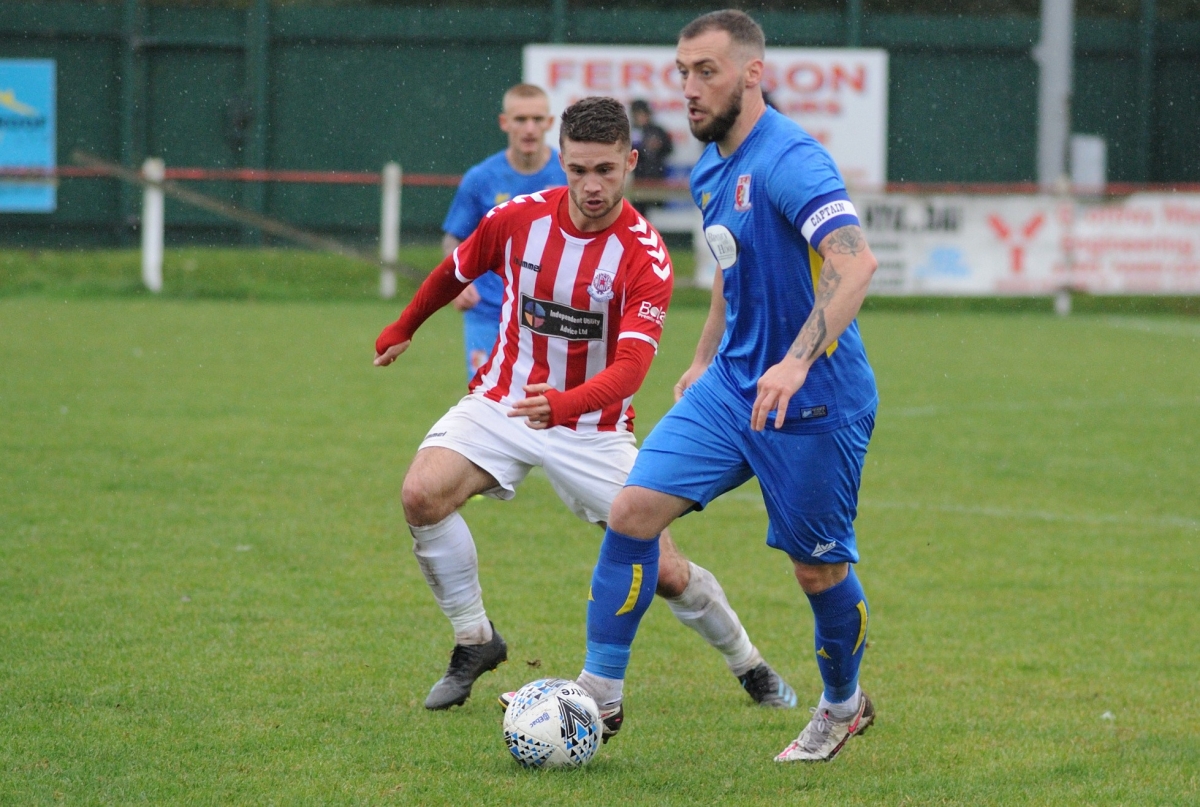 RCA captain Daniel Hawkins sets up a second half attack.

RCA made the short trip to Seaham Red Star for this re-arranged EBAC Northern League Div I fixture. The original game was due to be played on Boxing Day and supporters can be forgiven, given the weather conditions, for thinking that winter had arrived early. A cold wind and driving rain was the order of the day.

The management team made two changes to the starting eleven that played so valiantly last week at Consett. In came Ball for Marrs and Best replaced Swansbury who was injured in a freak accident in training on Tuesday when he collided with Davison and has bruised ribs. A reshuffle of the defence saw Jakab return to a central defensive role and Best came into the midfield.

Also back in the fold was Max Allen who took his place on the bench after a lay off with pulled hamstring.

The Star started really well as RCA adapted to their new roles and it wasn’t long before the home team created the first chance of the game when they were awarded a freekick on the left, Lawson whipped the cross into the box towards Nelson but Errington managed to get a touch on the ball and concede a corner. The corner was taken by Kerr who played it deep to the edge of the box where Nelson hit a first time shot which sailed over the bar.

RCA responded with a good move down the left Jakab played the ball Best who switched the ball out to Richardson, his cross into the box was met by Hennis and Davison, hit the chest of Hennis and ended up going inches wide of the target.

Although the game was moving from end to end it was the home team who were creating the better chances, a long ball out of defence by Hailes was picked up by Sayer but his low cross into the box was smothered by Ball before Lennox could pounce.

On the quarter hour RCA were awarded a freekick on the right, Burlace curled the ball into the danger zone but Jakab could only head wide.

The Star were starting to exert a lot of pressure on the visitors with Lawson instrumental in most of their attacks. In the 20 minute he slipped his marker and crossed into the box but Lennox under pressure from Errington could not get his shot on target.

The home team took the lead in the 24 minute counter attacking to great effect after a promising RCA break by Annang-Colquhoun ended with the wingers cross being hooked clear, the ball fell to M Robinson who was completely unmarked on the right, he moved forward before crossing the ball into the box where Lennox had the simple task of slotting home from close range.

Seaham Red Star again piled on the pressure and only some stout defending kept the scoreline at 1-0.

A rare break from RCA almost got them level, a ball from Best in to Davison saw the striker turn and hit a terrific shot which was blocked by Patterson, the ball fell to Richardson who smashed his shot straight at Hailes and the ball was cleared.

As the game entered the final minutes of the half Baggs received the ball on the half way line and was allowed to run 20 yards before delivering an inch perfect cross onto the head of Lennox but strikers header missed the target another chance to increase the lead missed.

Things went from bad to worse for RCA at the start of the second half when Seaham Red Star extended their lead, a good ball down the right wing found Lawson who slipped the defensive tackle before crossing low to the far post where Heywood was on hand to smash the ball home.

Three minutes later and they almost increased their lead when they were awarded a free kick, Kerr took the kick swerving it round and over the wall but it went inches over the bar and landed on the roof of the net.

Within minutes an intercepted pass was launched forward and the ball bounced kindly for Lennox who lobbed the ball over the RCA keeper but again the ball landed on the roof of the net.

RCA then made a number of changes bringing on Watts, Coghlan and Carr in an attempt to inject some fresh legs into the side. They also changed formation to 3-5-2.

The change after an hour’s play was dramatic, suddenly there was a willingness to get forward, Jacab played the ball out wide to Burlace who for once had acres of space and his cross into the box was met by Davison who rose to head the ball into the bottom corner of the net.

Substitute Carr was causing problems by winning the ball and his intelligent distribution was a constant threat to the home team.

Davison almost equalised in the 75 minute when Carr won the ball on the left, played a one- two with Watts before crossing to Davison but he placed his shot wide of the post.

An individual piece of skill by Annang-Colquhoun produced the equaliser on his 21st birthday, picking up a Jakab through ball 35 yards out on the right, he outpaced the Red Star defence before moving into the penalty area and curling the ball round the advancing Jennison into the far corner of the net.

Four minutes later it should have been all over, another surging run by Burlace on the right had the Red Star defence beaten and when he crossed to Davison six yards out he had time to control the ball before rounding Jennison but he was unceremoniously brought down by the keeper. The referee awarded a penalty showing Jennison a yellow card. Davison struck the penalty to the keeper's left but Jennison managed to get a hand to it and Annang-Colquhoun following up was closed down quickly and the ball was cleared.

In the final minutes both teams tried to find a way to get the winner but both defences were in no mood to relinquish what they had and the match ended in a 2-2 draw.

For 60 minutes Seaham Red Star had control of the game and at 2-0 the better chances in the game had fallen their way. However, for the final 30 minutes it was RCA who created the better chances and deservedly drew level and had good chances to win this game. I still need to get used to this double jeopardy rule where a goalkeeper 5 yards out brings down a striker, clearly denying a goal scoring opportunity, and remains on the pitch.