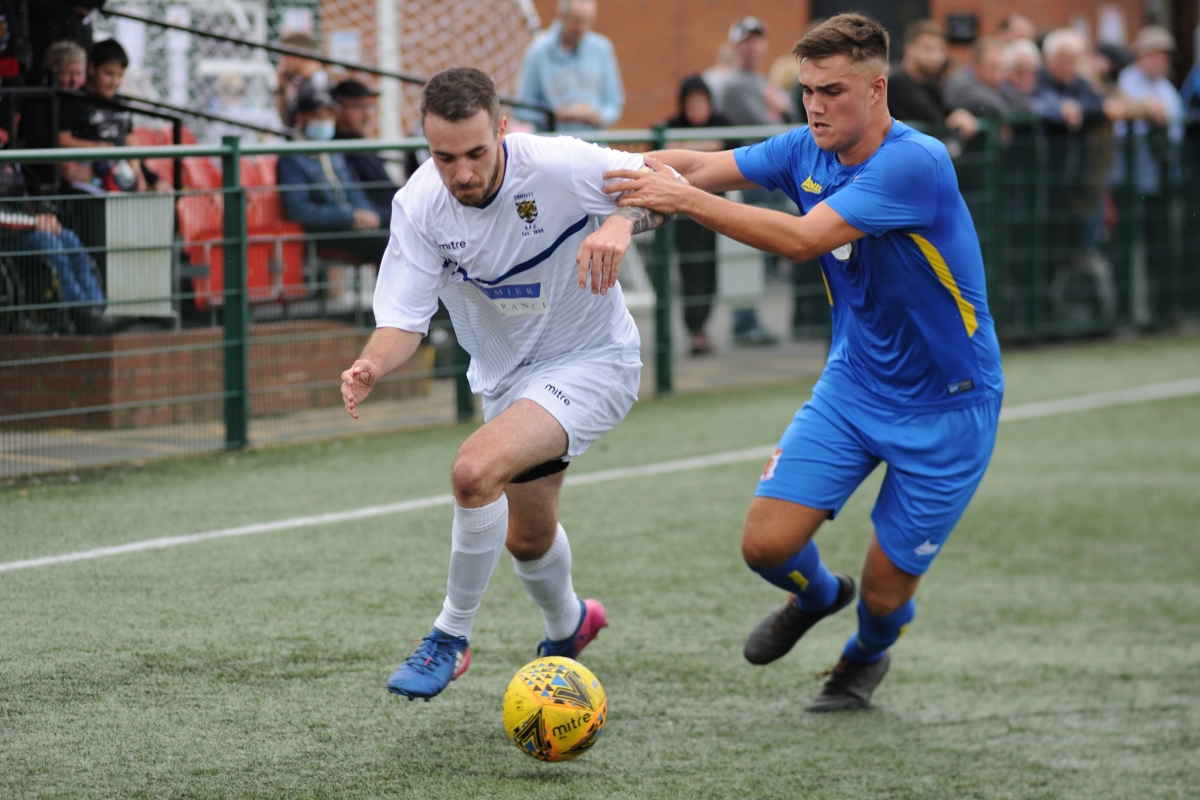 Sunderland RCA made the trip up the A691 to play league leaders Consett at their Belle View Stadium. After their well deserved win against a strong Newcastle Benfield side another tough test awaited Steve Riley’s team.

As last week, today was not going to be an easy game against a very confident and well organized Consett team.

RCA welcomed back Dan Hawkins after fracturing his ankle in the match against Seaham Red Star four weeks ago and the management team had no hesitation in including him in the starting eleven to add a little more experience to team.

RCA started well playing the ball forward quickly and putting pressure on the Consett defence who looked a little shaky in the opening exchanges.

A foul on Annang-Colquhoun saw the first free kick of the game which was taken by Burlace his whipped cross was aimed at Davison on the penalty area but Purewal was able to head the ball clear.

Hawkins orchestrated RCA next move winning the ball in midfield he played the ball out to Richardson before taking the return ball in his stride but his shot was blocked by Scott.

The RCA midfield were having the best of the opening 10 minutes breaking up play and creating attacking moves but without testing Hayes in the Consett goal.

A good ball forward from Burlace found Annang-Colquhoun in space on the right, he curled in a good deep cross for Hawkins but he was quickly surrounded and the ball was cleared.

Consett, having stemmed the tide started to make inroads into the RCA half. A good ball forward by Orrell found Callen but the Ex-RCA player's effort was blocked by J Croft at the expense of a corner, the corner was floated to the far post but Hennis was on hand to head clear.

Good anticipation by Jakab halted Consett’s next attack as he intercepted a Purewal pass before playing the ball to Hawkins who broke forward past two tackles but seemed to run out of options as he neared the 18 yard line and Purewal was able to make a good tackle to stop the RCA attack.

The home team persisted with their slow build up play while RCA were content to play a high pressing game and pounce on any mistakes. While this made for entertaining midfield action there was little goalmouth action and neither keeper had been seriously tested.

Consett produced the next real attacking threat when a good break by Metz on the right he made twenty yards unopposed before firing in a shot which flew over the bar.

A minute later and Metz again broke down the right, this time he played the ball into Larkin who rode one tackle before unleashing a low drive which Marrs turned round the post for a corner.

The resulting corner was taken short before being played to Callen whose shot was blocked, the ball fell to Carr who crossed into the box but Larkin could only direct his header over the bar.

The home team was starting to exert some pressure on the RCA defence but it was coping well.

The next attack came when Burlace picked up the ball on the right and played a terrific crossfield ball into the path of Richardson, he cut inside his marker before playing the ball to Davison who controlled the ball well before powering in a shot which was blocked by Allen.

A wonderful flowing move by Consett almost produced the first goal, Hayes played the ball forward to Callen who played it to Scott his first time pass found Carr who laid the ball into the path of Larkin but he fired over the bar.

With half an hour gone Consett were awarded a freekick 25 yards out, Carr played the ball to Scott who crossed into the box where Swansbury was able to head clear but the ball was picked up by Scott this time his cross was went towards the back post for Callen but Hennis was able to get his head to the ball to concede a corner.

As the half entered the final 15 minutes chances were still few and far between. A shot by Davison was again blocked by Purewal, while a Scott shot was blocked by Burlace.

In the final attack of the half Burlace picked up the ball up on the halfway line from a Marrs throw out, the full back made a good run down the right before crossing into the box where Davison headed wide.

The second half started well for RCA, Annang-Colquhoun made a good break down the right winning a corner off Scott. J Croft took the corner driving it to the far post where Davison rose to head the ball into the six yard area for Jakab, but under pressure he could only flick the ball straight at Hayes in the Consett goal.

Another quick break by Annang-Colquhoun on the right and his cross was met by Hennis who, with his back to goal, went for a spectacular overhead kick which went high and wide of the target.

Consett set up the next attack as both full back combined to set up Carr who forced a good save from Marrs.

The game was really opening up now as both side realised that one goal might settle this match.

An RCA freekick on the right taken by Burlace, hit the wall but was quickly retrieved by the RCA full back who sent the ball into the box for Davison whose downward header caused panic in the Consett defence as the ball bobbled up and Jacab headed towards goal but Hayes was on hand to calm everyone down.

Orrell is the instigator or Consett’s next attack intercepting a pass on the half way line he breaks forward before squaring the ball to Scott who curls in a shot which Marrs deals with easily.

Consett broke the deadlock in the 64 minute when Carr won a corner on the left; Orrell drove the ball toward the far post where Purewal rose unopposed to head home from six yards out.

The visitors were pushing for the equaliser; Hawkins played the ball forward to Richardson who squared the ball to Davison who made room to shoot before squeezing his effort inches wide of the goal with Hayes beaten.

A catastrophic error by Marrs gifted Consett their second goal what looked like a routine clearance from the RCA keeper hit the back of former RCA player Callen and ricocheted into the empty net.

This knocked the wind out of the sails of the RCA players who had fought so hard against the league leaders.

Consett defended well in the final minutes of the game denying RCA any chance of getting a foothold into the match and in the end looked fairly comfortable in restricting the visitors chances in the final 10 minutes to two half chances one wide by Watts and a blocked shot from Elcoate.

This was another good performance from the team and it took a “fluke goal” to finish them off.

An evenly fought first half where we stopped the opposition from playing and created chances of our own was followed up by a good second half performance where we dug in when we needed to and restricted them to long range efforts on goal.

While it is disappointing to lose when they have put so much effort into the game the team need to look at the positives, throughout the game they worked as a unit with everyone doing the job they were asked to do. Unfortunately we did not have the luck that Consett had and in the end that's what cost us.