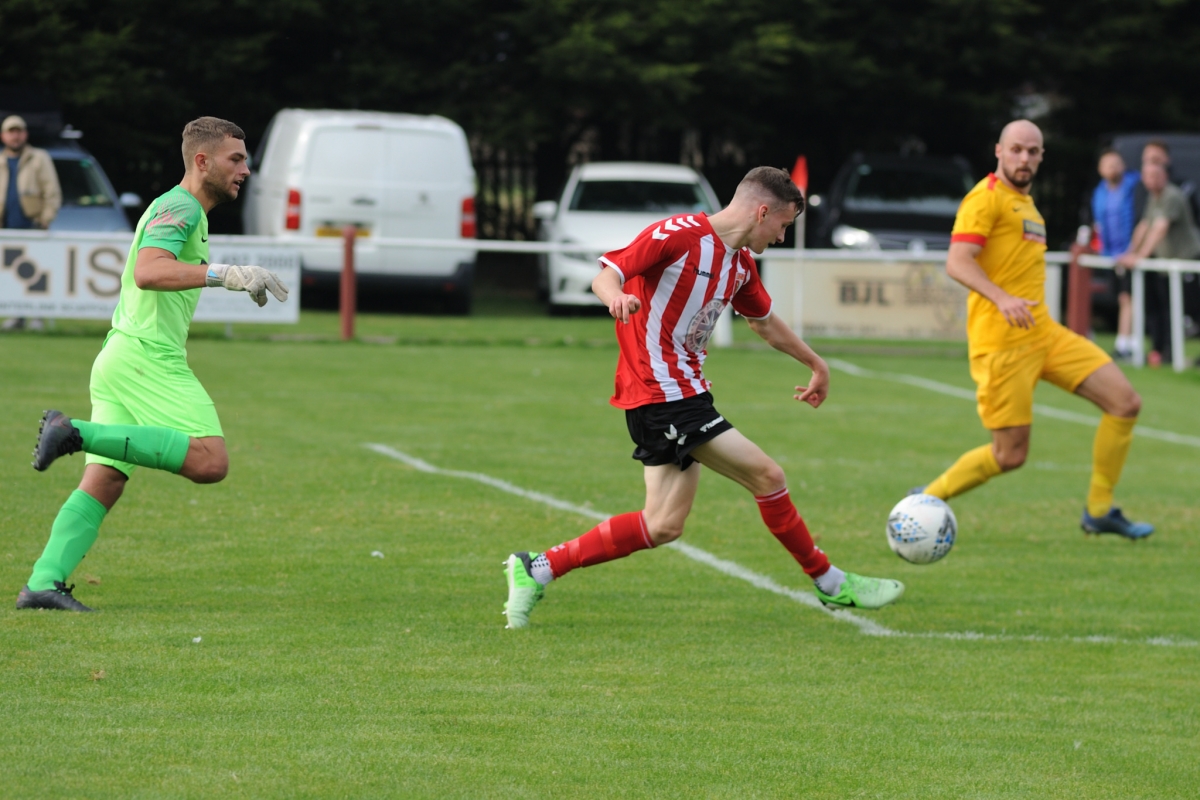 Taylor Richardson equalises for RCA with a lovely solo goal.

A week they say is a long time in politics, well I can tell you a week is also a long time in football while we waited to see what reaction we would get from the team after crashing out of the FA Vase at the first hurdle last week.

Newcastle Benfield were the visitors to Sunderland LGV Park for this EBAC Northern League Div I match.

Today was never going to be a walk in the park against a very strong Newcastle Benfield team who, despite losing on Tuesday to Seaham Red Star, have had a good start to the season.

The return of Carr and Annang-Colquhoun to the squad meant that the only players missing today were long term injuries to Hawkins (Fractured ankle 3-4 weeks), Andrew Johnson (Cartilage 4 months) and Allen (Hamstring 2-3 weeks).

The management team made a couple of changes to the squad for the match.

Unlike last week RCA started very well, from the kick off they moved forward with purpose, in the opening minute a through ball from Best found Annang-Colquhoun who crossed into the box for Davison but his effort went narrowly wide of the target.

A quick break by the visitors saw Glen-Ravenhill burst down the right before playing the ball to Haley but his shot was comfortably saved by Marrs.

With eight minutes gone RCA should have taken the lead, some good build up play between Carr and Best released Richardson who skipped past his marker to cross the ball into the sic yard area where Annang-Colquhoun from 4 yards out shinned the ball over the bar. A great opportunity missed.

A minute later and this time a run from Burlace was spotted by Jakab who played the ball into his path, the RCA full back whipped a vicious cross into the box but it evaded everyone and was cleared up field by M Turnbull.

RCA did not have to wait long to take the lead when Jacab played the ball forward to Annang-Colquhoun who laid it off to Burlace, this time his cross was met with a towering header by Davison and the ball flew into the net.

Benfield’s response came through a move which saw Kanda and Haley combine to set up Walton but his shot from outside the area flew well wide of the target.

That should have been a wakeup call to the RCA defence as the visitors started to apply their first real pressure of the half but it took a piece of individual skill to unlock the RCA defence when Walker picked up a through ball from Brayson dribbled past his marker on the by-line before creating the angle to fire into the corner of the net.

The visitors with the advantage of the slope and their tails up after the equaliser had a good chance five minutes later when a long ball forward by Thompson was held up by Brayson who squared it to Haley who fired in a shot which was deflected for a corner by Swansbury.

Both teams needed to take a breather after a hectic opening half hour and as the game settled down neither team troubled the opposing keeper.

However as the game reached the end of the half Benfield seemed to get the better of the midfield exchanges and it took a good save from Marrs to deny Kanda who latched onto a cross from Walton.

A quick response to that attack came from Marrs kick out which found Annang-Colquhoun he held off his marker before playing the ball inside to Burlace who unleashed a terrific shot which hit M Turnbull and went out for a corner.

With two minutes remaining till half time RCA’s nemesis Paul Brayson picked up a through ball and found himself clear of his marker and when he is one on one with the keeper there is only ever going to be one outcome and so Benfield, after a fairly even first half, went in at half time 2-1 up.

The second half saw RCA pushing forward in search of an early equaliser but it was the visitors who had the best chance of the opening five minutes when Haley played an inch perfect pass to Brayson but the usually reliable striker scooped the ball over the bar.

The home team then had a period of sustained pressure and in the 55 minute after a short corner was taken Burlace picked up the ball from Jacab, crossed to the far post where Swansbury  headed the ball back into the danger area but Jakab following up blazed the ball over the bar.

It seemed to be only a matter of time before RCA equalised but when it came it was a lovely piece of skill from Richardson when he latched onto a through ball from Best skipped past a defender before rounding the keeper before sliding the ball into the net despite M Turnbull attempt to hook it clear.

While the game flowed from end to end it was RCA who had the better chances with substitute Carr creating a chance for Richardson but Gordon was quickly off his line to avert the danger. A free kick on the edge of the box was curled goalward but Gordon again was on hand to make the save.

RCA eventually took the lead in the 72 minute when Richardson won a corner on the left, the winger took the corner electing to play the ball to the back post where Davison, unchallenged at the back post thundered in a header which crept inside the upright.

The game was held up for a number of minutes while substitute Lawrence received treatment for an ankle injury.

When play resumed the home team, having used all their substitutes, were reduced to 10 men and Benfield looked to take advantage of the fact pushing forward, Haley had a good effort brilliantly saved by Marrs after some good play by Walton and Kanda had set him up.

In a last throw of the dice Benfield took off a defender and replaced him with a forward, while RCA re-introduced the limping Lawrence as a makeshift centre forward.

With time running out and deep into injury time Benfield almost snatched an equaliser when their substitute picked up the ball from a Brayson pass but from well inside the box he smashed the ball over the bar.

This was a much better all round performance from RCA after the disappointment of last week. Now we have to look forward and make sure that those levels of performance become the norm.

Today was about performance and reaction and on both counts the team produced. This was an entertaining match which showcased what is good about non-league football; both teams wanted to play football and did just that, end to end football with goals as a bonus what’s not to like.

Now we have to look forward and make sure that those levels of performance become the norm.

It was also good to see Sunderland AFC supporters at our game. I trust that they enjoyed the experience and will be back for our next home game and bring a few friends with them.