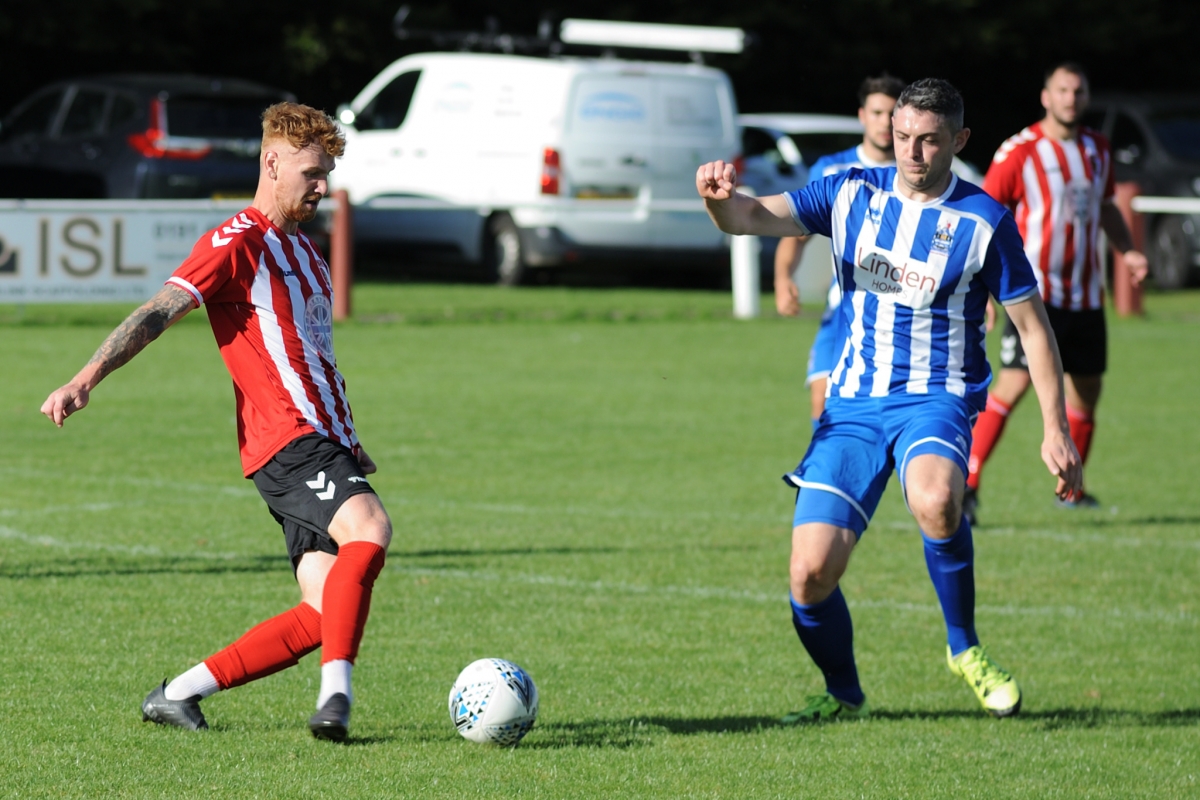 After being knocked out of the FA Cup last week at the hands of Stockton Town, RCA looked to bounce back in the FA Vase first Round Qualifying against Northern League Div II Redcar Town who were making their first foray into the competition, it was also the first time that the two teams had met.

The management team without the services of the manager Steve Riley was forced to make several changes to the team who lost last week match. In came Burlace, Hennis and Watts to replace, Carr, Allen and Annang-Colquhoun all unavailable.

A poor start to the game by RCA gave Redcar the upper hand in the opening 10 minutes of the game.

With the advantage of the slope the visitors pushed forward and created a number of early chances, a cross from the left by Webster was met by Bennions but the Redcar forward headed wide.

Two minutes later and Williams intercepted a poor pass out of defence and seeing Marrs off his line, chipped the ball over the head of the RCA keeper but the ball hit the bar and rebounded to safety.

As the game settled the visitors maintained the pressure on the RCA defence and they were finding it difficult to get the ball out of their own half.

The passing game which had been in evidence in the previous matches against North Shields and Stockton Town had disappeared and was replaced with a long ball game which saw the ball frustratingly humped forward and defended fairly comfortably by the Redcar defence.

The first opportunity that RCA had came from a corner in the 24 minute. Best swung the ball to the far post where Davison rose to head goalward but the ball deflected wide for another corner which was scrambled clear.

Redcar took the lead four minutes later when RCA failed to clear their lines and Howes won the ball inside the RCA penalty area, dribbled the ball along the byline before cutting back to make room for a shot which flew into the net past Marrs.

RCA looked to strike back immediately, Croft sent a lovely crossfield ball to Richardson who controlled it well but his shot from and acute angle was blocked for a corner which was easily cleared by the Redcar defence.

As the game wore on RCA were starting to get some success, a good ball down the line from Burlace was picked up by Richardson who crossed into the box for Davison but he headed over the bar.

In the dying minutes of the half another crossfield ball this time from Richardson found Watts in acres of space and one on one with the keeper but RCA’s newest signing missed the target and the opportunity to level the scores just before half time.

RCA with the advantage of the slope and the wind started the second half well and put pressure on the visitors defence, a good move between Hennis and best set up Burlace but his effort was brilliantly saved by Algie at the expense of a corner, Best took the kick but the ball was headed over the bar by Swansbury.

A quick break by Redcar almost doubled their lead; Prest broke away on the right and crossed into Lee who forced a great save from Marrs.

Redcar were defending in numbers and were looking to waste time at every opportunity which was frustrating the RCA attacker. A freekick on the edge of the box was taken by Watts who hit the wall and the ball rebounded for a corner which again was scrambled clear.

The pressure was mounting on the visitors defence a good ball forward from Errington found Richardson who skipped inside his marker but his shot was blocked by Algie who was injured in the process and the ball ran out for a goalkick?

The equaliser when it came was well worked Hennis intercepted a pass in midfield and played the ball out to Best, he crossed to the far post where Watts hooked the ball back into the box for Jakab to volley home from six yards out.

This should have been the spur that RCA needed to go on a win the game but instead they dropped back into a defensive mode and allowed Redcar to get back into the game for 10 minutes when they created two half chances with D Thompson going close with a snap shot and then Wheatley creating space for a shot which flew wide.

RCA almost took the lead in the 75 minute when a long throw from Burlace was flicked on by Davison and fell to Best who hooked the ball over the bar from a promising position.

Redcar continued to look dangerous on the break and in the 78 minute Prest burst up the right wing and crossed into the box toward D Thompson but Swansbury was able to head the ball away for a corner.

RCA pushed forward looking for a winner but were guilty of playing too many long balls forward which either went straight through to the Redcar keeper or went straight out of play.

In the final minute of the game Redcar had a great opportunity to win the game as they again broke quickly after an RCA attack floundered and a cross into the box was met unopposed by Porritt but he could only head the ball straight at Marrs.

With the game deep into injury time and heading for penalties RCA were again guilty of over committing to attack and leaving the defence wide open to a counter which Redcar exposed to the full when Prest won the ball, burst forward and with only one defender back he played the ball through to D Thompson who smashed the ball past a bewildered Marrs in the RCA goal. Whether or not there was foul leading up to the goal is irrelevant as RCA did not react to the threat of the attack.

RCA crashed out of the FA Vase with little more than a whimper.

On the day we were not good enough, there were too many players not up the task today. Too many players not taking responsibility and too quick to apportion blame, Why, when we have played some really good football against some very good sides in previous matches, did we go with a long ball game today.

I lost count of the amount of times we lost possession playing a 40 or 50 yard pass when we had a 10 yard pass on and would keep us in possession.

This was up there with one of the worst displays from an RCA team in the last 25 years.

Take nothing away from Redcar Town, they came with a game plan to frustrate and they stuck to it and got their reward and good luck to them in the next round against Billingham Town.

Next up for us is another home match this time against Newcastle Benfield on Saturday, 18 September 2021, kick off 3.00pm