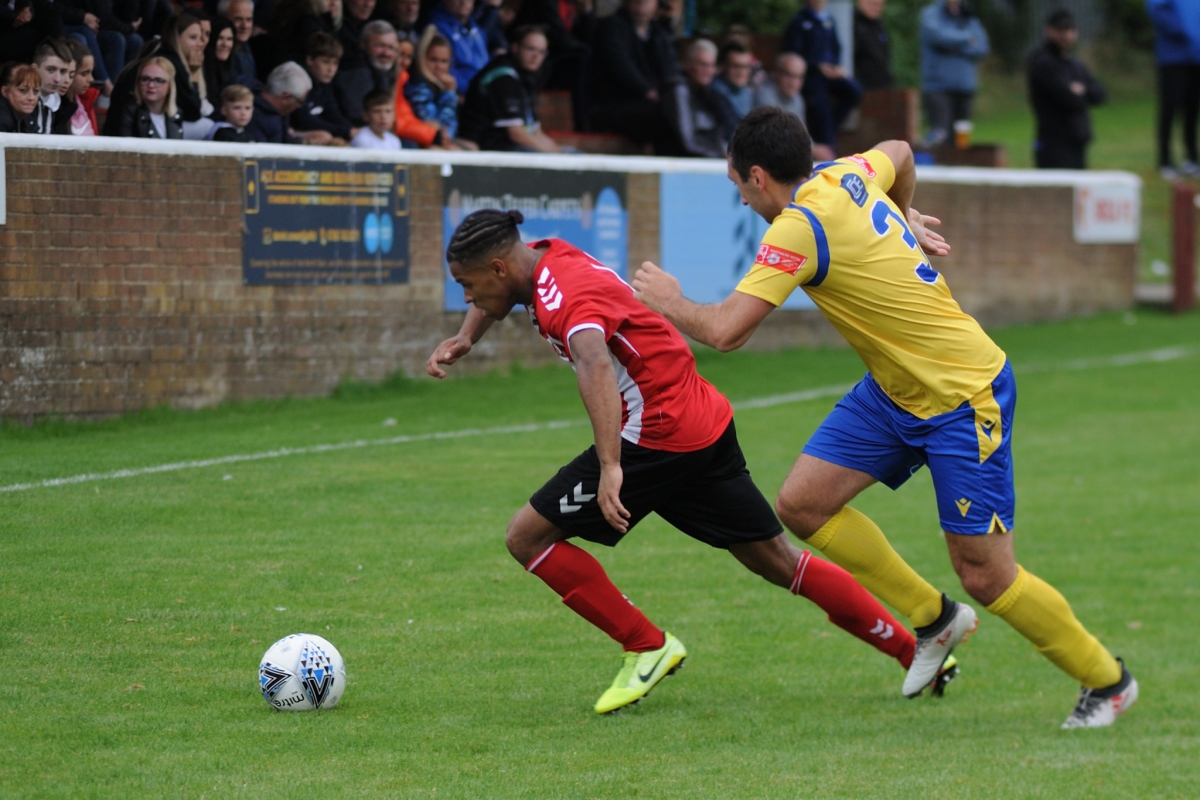 Goal scorer Michael Annang-Colquhoun sets up a second half attack.

Sunderland RCA welcomed Northern Premier League East Division’s Stockton Town to Sunderland LGV Park for this FA Cup First Round Qualifying tie. After their success in the last round against Frickley Town of the same division RCA supporters could be forgiven for being optimistic about their chances today.

The management team was forced to make changes to the team that drew on Bank holiday Monday against Seaham Red Star. Hawkins (Fracture Ankle) and Hennis (Bruised ribs) were replaced by Joshua Croft and Greg Swansbury, while Keaton Marrs replaced Jonathan Ball in goal and Max Allen returned to take the place of Nathan Lawrence.

RCA started the game brightly attacking the visitors from the off, a ball out to Richardson on the left saw him outpace the Stockton defence in the opening minute before firing in a shot which was well blocked Mulligan, the ball rebounded to Carr on the edge of the box but Bulmer was on hand to block his effort and the danger was averted.

Richardson was causing all sorts of problems at the back for Stockton. In the 5 minute Carr found Richardson with a defence splitting pass and the winger smashed a low shot which Roberts did well to prevent creeping in at the near post.

Having survived the initial RCA onslaught, the visitors started to create chances of their own, in the 7 minute Portas cleverly chipped a ball into the RCA box where Nicholson headed the ball back across goal to Owens but the striker was denied by a superb point blank save from Marrs and the ball was scrambled away for a corner.

The game was settling down with the visitors content to keep possession while RCA looked to the two wingers to open the game up.

Stockton took the lead in the 14 minute when Roberts was brought down 20 yards out. Two Stockton players lined up to take the free kick but it was Hayes who curled a sublime shot round the wall and into the bottom corner of the net.

RCA were struggling to retain possession of the ball and the visitors started to get to tighten their grip on the game. In the 21 minute a corner by Portas was headed goalward by Nicholson but Marrs pulled off another stunning save and was able to get a hand to Roberts’ follow up shot.

However, the relief was short lived as Portas picked up the ball in midfield before playing it forward to Owens whose cross field ball was met by M Roberts who smashed it into the far corner of the net giving Marrs no chance.

Some excellent defending denied RCA the opportunity to strike back immediately when from the kick off the ball was played through to Richardson who whipped in a low cross toward Annang-Colquhoun inside the six yard box but somehow McWilliams managed to get a foot to the ball to clear the danger.

RCA continued to push forward and were rewarded in the 29 minute when Annang-Colquhoun was fouled on the right side of the penalty area, the free kick taken by Swansbury was headed down by Davison and Annang-Colquhoun controlled the ball spun and shot into the net.

Within minutes RCA equalised when they were awarded another free kick on the right. This time it was Best who drove in a wicked curling ball which was met by Jakab whose flying header flew past C Roberts and into the net.

Both sides had chances to take the lead with Owens going close to getting the visitors the lead but unable to get a touch on a Nicholson cross. While Portas had a close range effort saved by Marrs.

In the final minute of the half another marauding run by Richardson opened up the visitors' defence and his cross was met by Davison, but his header smashed against the bar and over for a goal kick.

A cagey start to the second half saw neither team willing to commit men forward and this allowed Portas a lot of time on the ball as the midfielder looked to set the visitors up.

It was almost 10 minutes into the half before Stockton really came to life and it was Hayes on the left who produced a lovely piece of skill to round Annang-Colquhoun before crossing M Roberts, his cut back was met by Owens but J Croft was able to block the shot and Errington cleared to safety.

The visitors were starting to turn the screw as RCA seemed to run out of steam and Portas, still full of running, was starting to run the midfield, picking up the ball in midfield he went on a mazy run before slipping the ball through to Hayes but his shot flew inches wide of the post.

With 20 minutes to play Stockton took the lead. A quickly taken free kick from Portas had the RCA defence on the back foot and Hayes needed little encouragement to cut inside before unleashing an unstoppable shot into the far corner of the net.

The game was effectively put to bed with six minutes to go when Hayes was this time the provider; drifting past his marker he crossed to the far post where Steel was on hand to guide the ball into the net.

Portas almost capped a tremendous performance with a goal but was denied when his shot struck the post and the rebound fell kindly for Marrs.

In the final minutes of the match RCA were denied the chance of another fight back when C Roberts made a terrific save to deny Best whose curling shot looked destined for the bottom corner of the net.

Stockton proved to be to strong on the day with key players stepping up when they needed to, Portas and Hayes were, in my opinion, the main difference in the teams today.

RCA didn’t give up and could not have given any more for the cause. We continue to hear people talk about fine margins and that was the case today. Had “Sparky” scored just before half time would it have been a different result, who knows?