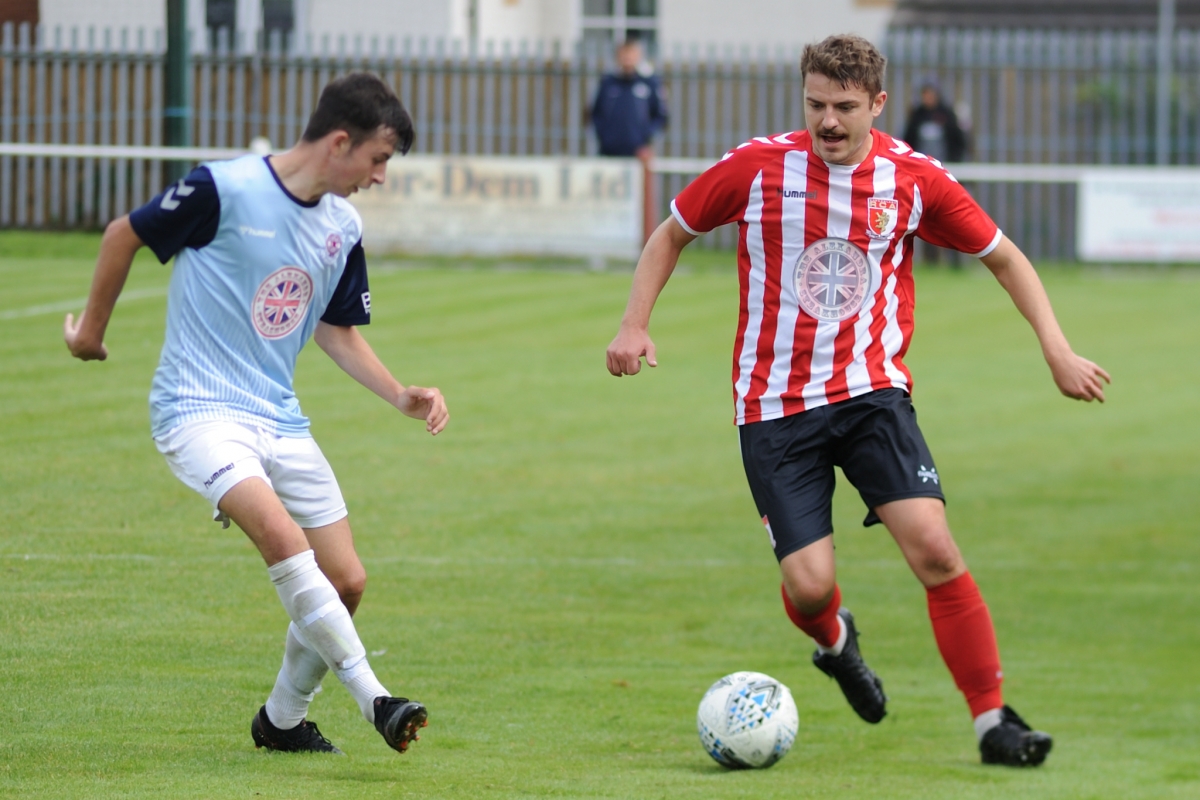 Jonathan Carr in action during the first half of the match.

Hot on the heels of Saturday's victory over Whickham, Sunderland RCA were back in Northern League Division One action, with Seaham Red Star the visitors for this Bank Holiday Monday match.

RCA made one change to Saturday’s starting line-up, with Michael Annang-Colquhoun replacing George Pinder, who took a place on the bench.

The match began in a similar fashion to Saturday, with the visitors kicking down the slope and attacking right from the off. One difference, however, was the weather - glorious sunshine on Saturday had turned to driving rain as supporters looked to shelter from typical Bank Holiday conditions!

In the fifth minute Robinson made a driving run towards the RCA penalty area but his shot was blocked for a corner, which was cleared.

Barely a minute later and Seaham had another chance when Hailes looked to cross the ball from the left and it seemed to be going harmlessly over but struck the top of the crossbar and behind for a goal kick.

Seaham were dominating the early exchanges and in the 12th minute they rattled the woodwork once again after Waite's header came back off the crossbar and was cleared.

The chances kept coming for the visitors and minutes later Lawson's shot forced a good save out of Ball in the RCA goal.

It came as no surprise to anyone in the ground when Seaham took the lead in the 18th minute - the ball was played into Robinson on the edge of the RCA penalty area and his shot took a deflection off an RCA defender. Ball still managed to get a hand to it, but was unable to prevent Seaham opening the scoring.

Up to this point, the ball had barely been in the Seaham half, but the goal saw RCA begin to gain a foothold in the match and become more of an attacking threat without testing Jennison in the Seaham goal.

In the 40th minute, RCA had their best chance of the half as a corner into the six-yard area wasn't dealt with and Davison stabbed the loose ball over the crossbar.

With half-time approaching, Seaham had another chance but Lawson headed a cross wide of the post.

During the interval Craig Hennis was replaced by Joshua Croft who was making his RCA debut.

The second half began as it had on Saturday, with RCA kicking down the slope and looking much more positive in the search for an equaliser.

There was little to report by way of goalmouth action during the opening fifteen minutes of the second half.

On the hour mark, Sayer headed a corner wide for the visitors.

Two minutes later and Daniel Hawkins, who had sustained an injury in the first half, was replaced by Dane Burlace.

In the 69th minute, RCA created a good chance, working the ball to Carr, whose shot from the edge of the penalty area was a yard or so too high to test Jennison.

Seaham then immediately broke up to the other end of the pitch and Robinson forced a good block from Ball.

With the match inside the final fifteen minutes, RCA were awarded a penalty after a driving run into the box from Annang-Colquhoun was brought to an abrupt end by a challenge from a Seaham defender and the referee had no hesitation in pointing to the spot. Davison stepped up to calmly slot the ball home.

Both sides then had half chances to score - in the 75th minute, a scramble in a packed RCA penalty area looked ominous until Ball was able to smother the loose ball. Five minutes later and Best fired a free-kick onto the roof of the Seaham net.

Almost unbelievably, and barely a minute later, Ball was given a straight red card after being adjudged to have handled the ball outside the penalty area. With all substitutes used and, therefore, unable to bring on replacement goalkeeper Marrs, RCA were forced to make an outfield player the temporary goalkeeper. The job was given to Jakab and his first task was to keep out the resulting free-kick. Kerr's kick was well struck and crashed against the face of the crossbar.

There was still time for Seaham to almost grab a dramatic stoppage time winner - as RCA pushed forward in numbers looking for victory, the ball was cleared and Robinson broke free from his own half. As he reached the edge of the penalty area, Jakab came out to narrow the angle and the Seaham striker side-footed the ball well wide of the target.

Another highly competitive match and a well-earned point for RCA after a slow start the second half was, again, much better. Seaham will feel they should have won the match, having hit the woodwork on three occasions.

Next up for RCA is the biggest match of the season so far - newly-promoted Stockton Town are the visitors to Sunderland LGV Park on Saturday, 4 September for an Emirates FA First Qualifying Round match. Kick-off is at 3pm.

you get more than you deserve. Just saying.