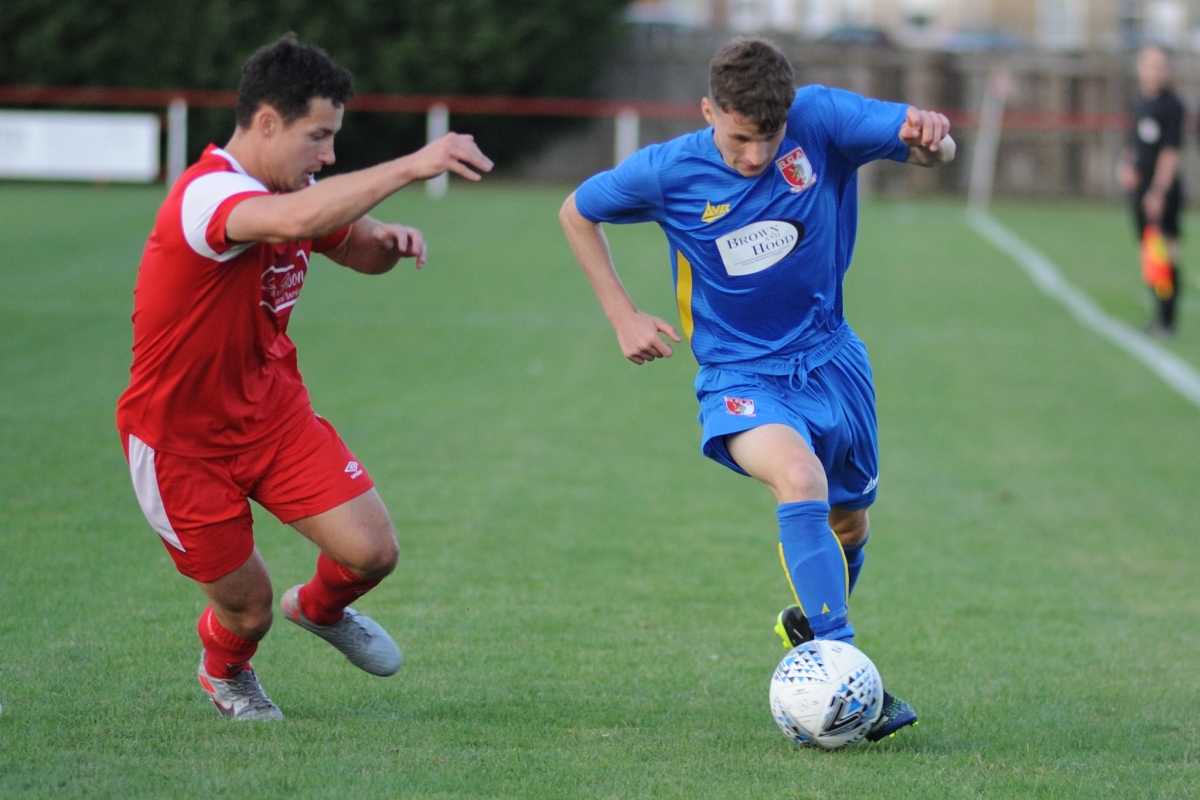 Taylor Richardson drives at the North Shields defence during the first half of the match.

Following Saturday’s home defeat to Northallerton Town, Sunderland RCA made the short trip up the A19 for what, on paper at least, looked to be the toughest test of the season so far.

RCA made four changes to the side beaten on Saturday: into the starting XI came Ball, Allen, Best and Johnson, replacing Marrs, Thompson, Swansbury and Annang-Colquhoun.

The match got off to a high-tempo start and the pace and intensity was to remain throughout the match. There was, however, little by way of goalmouth action in the opening quarter hour, with the match being keenly contested in midfield.

The first effort on goal was a shot from Brooks which was comfortably saved by Ball in the RCA goal.

In the 17th minute RCA had their first attempt on goal as a good move resulted in a shot by Johnson being well saved by Purvis.

The match was now opening up nicely, with both sides attacking at every opportunity - Shields were looking to Brooks on the left as their danger man, however, he was flagged offside numerous times in good positions. RCA, meanwhile, were playing the ball into Davison and Johnson and looking for lay-offs to create chances.

The opening goal of the match came in the 25th minute and it was RCA that took it - neat play in midfield eventually found Johnson on the left and his cross from the byline was inch perfect for Hennis to head home from close range.

The lead, however, only lasted eight minutes and Shields equalised when a ball in from the left was slotted home at the far post by Cassidy.

Both sides created further chances to take a lead into half-time as the match continued to ebb and flow - first, in the 40th minute, a stooping header by Brooks hit the side netting of the RCA goal. Then, barely a minute later, the dangerous Richardson took on three Shields players as he drove into the penalty area, forcing a corner after a well-timed last-ditch tackle. From the corner, Hennis headed the ball over the crossbar.

The second half continued where the first half had ended, with both sides looking to attack, but without testing either goalkeeper. On the hour mark, Richardson almost made a goal out of nothing, beautifully controlling a high goal kick from Ball midway inside the Shields half, before turning and attempting to lob Purvis from 30 yards, but the keeper was able to catch the ball fairly comfortably above his head.

Ten minutes later and Shields had a great chance to take the lead - a nice move resulted in Wilson slotting the ball towards goal, but Jakab was perfectly positioned to hack the ball clear off the line to prevent a certain goal.

With 20 minutes remaining, RCA brought on Annang-Colquhoun in place of Johnson. By this point Shields were beginning to turn the screw in search of a winner and for the remainder of the match RCA were forced to defend wave after wave of attacks, with only the occasional counter attack to relieve the pressure.

In the final ten minutes, Lawrence replaced Best as RCA continued to defend superbly in numbers as Shields continued to attack.

With three minutes left on the clock, Shields had a great chance to win the match - Wilson drove into the RCA penalty area from the right and his shot was brilliantly blocked by Ball. Chaos then ensued as the ball was blocked again at the near post with bodies piling in to force the loose ball home.

A frantic finish to the match saw Croft replace Hennis in stoppage time to help run the clock down.

An excellent match in which RCA had to defend magnificently, particularly in the final 15 minutes, when Shields threw the proverbial kitchen sink at the RCA goal. Both sides had chances to win it, however, but in the end had to settle for a point apiece.

Next up for RCA is the biggest match of the season so far as we travel to Frickley Athletic on Saturday, 21 August for an Emirates FA Cup Preliminary Round match. Kick-off is at 3pm.