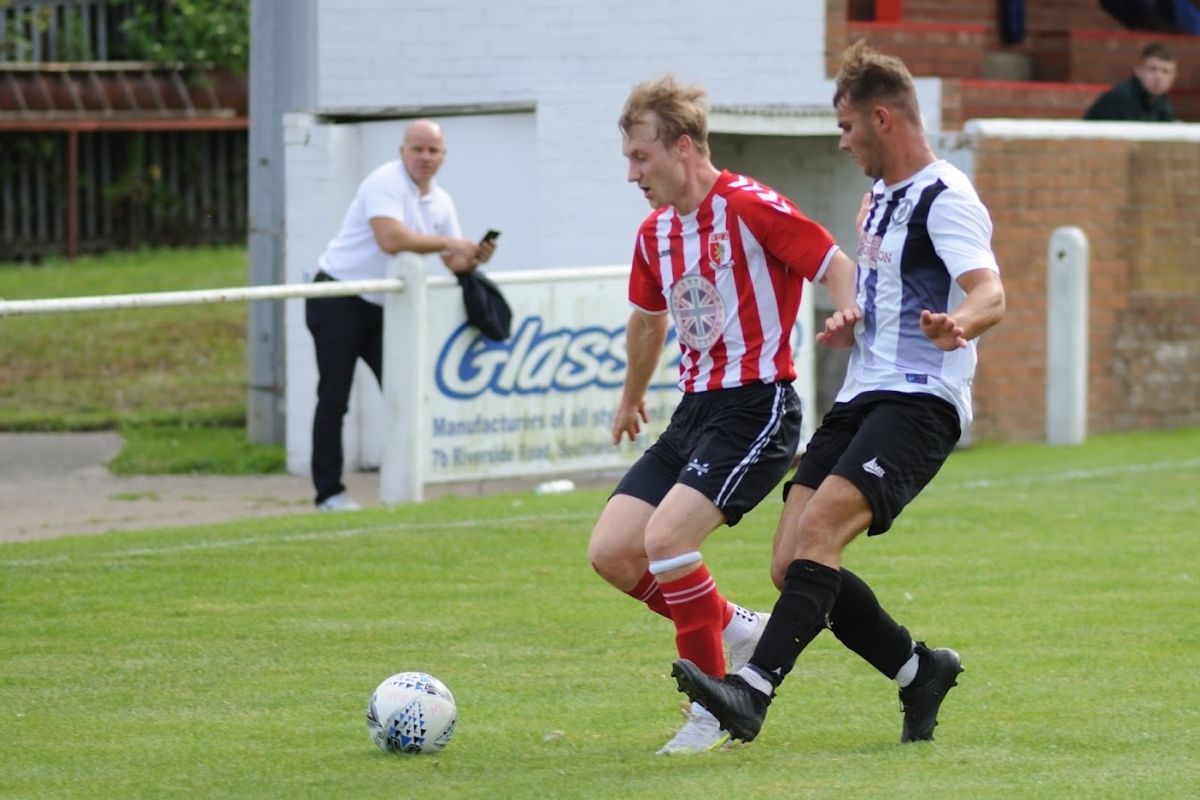 Andrew Johnson on the attack as RCA push for a late equaliser.

Northallerton Town visited Sunderland LGV Park for this EBAC Northern League Div I clash. Both teams have one league win under their belts with Northallerton defeating West Auckland Town which was a terrific result for them, so today’s match was going to be a test for a youthful RCA team.

The pitch once again looked in superb condition and the warm sunshine made for an enjoyable afternoon for the fans.

The management team was forced into one change with Thompson replacing Fairley.

Northallerton could not have had a better start to this match with Graham opening the scoring in the 2 minute, a deep corner from left was headed back into the box by Marron and the ball was not cleared , eventually falling between Swansbury and Marrs and the “town” winger nipped in to stab the ball into the net.

RCA rallied and were unlucky not to equalise five minutes later when Richardson outpaced Marron before sending in a low cross which was met by Davison whose low shot was well saved by Dawson.

Corners seemed to be causing RCA problems and another deep corner was not dealt with and the ball was headed back into the box. In the goalmouth scramble that followed there were three shots blocked before the ball was eventually cleared up field by Hennis.

Annang-Colquhoun on the right won a corner after a strong challenge from McAvoy stopped his cross reaching Davison. The corner was whipped in and Hennis sent a glancing header wide of the upright.

RCA were starting to compose themselves and both wingers were getting some success, a Richardson cross after a good run on the right was met by Davison but he could only send his header straight into the arms of Dawson.

However, the home team did not have long to wait for the equaliser, Hennis played the ball out to Jakab on the right and his cross was not collected cleanly by Dawson and fell to Davison who calmly fired in from 10 yards out.

A long crossfield ball from Jones found H Thompson unmarked on the right; his cross into the box was met by Stephenson who forced a good save by Marrs.

Another corner to Northallerton caused problems in the RCA defence again it was directed at the far post and headed down to Rees, his shot was blocked and the rebound was blasted well over the bar.

The game was end to end with both teams pressing forward at every opportunity, a shot from Crust was blocked by Swansbury at one end while at the other end Annang-Colquhoun shot into the side netting from a good position.

On the half hour “Town” produced a great move when H Thompson sent a 40 yard pass to Rees on the right his first time cross was met by Stephenson who fired wide to the relief of the RCA defence.

The response to this was immediate as RCA put pressure on the visitors defence a g run by Annang-Colquhoun forced a corner on the right and Carr’s cross into the box was glanced on by Swansbury into the path of Richardson but he shot wide.

The visitors took the lead in the 35 minute when they were awarded a freekick; the RCA defence seemed to switch off as the referee talked to Errington regarding the tackle. The free kick was taken quickly to Jackson who crossed to the near post where Rees back heeled it into the net.

Within five minutes RCA were level again when a good run by Richardson on the right saw him cut inside the box and forced a corner. Carr took the corner sending the ball in toward the penalty spot and Hennis rose unopposed to head home.

You could be forgiven for thinking that the scoring and the excitement was over by this time but Northallerton’s Jackson had other ideas, picking the ball up from a throw in, he weaved his way between three defenders before sending a powerful shot into the net giving Marrs no chance.

The second half saw RCA bring on Best for Thompson moving Carr to the left back position.

The home team went on the attack from the start of the second half, a good ball from Hawkins to Richardson and the winger outpaced the visitors defence again but hit his shot wide of the target.

RCA pushed forward and Hennis and Davison combined to create a chance but the effort from Davison was blocked by Marron. A minute later and Carr played the ball to Johnson who slid it to Davison but his shot was blocked.

At the other end a succession of misplaced passes presented chances for Northallerton to extend their lead but good Defensive work by Swansbury, Errington and Jacab prevented them from extending the lead.

The game changed in the 63 minute when Swansbury was dismissed in what looked like an innocuous challenge where he looked to head the ball forward under pressure from a “Town” player.

Despite the dismissal and playing with 10 men RCA took the game to the visitors with wave after wave of attacks.

Lovely interplay between Johnson and Best ended with the RCA midfielder curling an inviting ball into the box but it evaded the outstretched leg of Davison.

Jacab played the ball Richardson on the right who slipped past his marker before playing the ball to Johnson inside the box but his side footed effort was brilliantly saved by Dawson.

Northallerton seemed to have weathered the storm and their time wasting antics went unpunished by the referee.

As the game entered the final five minutes RCA set up a final surge an inch perfect pass from Best found Johnson inside the penalty area but his first time shot was somehow blocked by Crust and went out for a corner.

Best took the corner, whipping in a curling ball which evaded the “Town” keeper, struck the inside of the far post but somehow stayed out and was scrambled clear for another corner.

This time Best’s corner kick was met powerfully by the head of Davison but struck Hennis on its way into the net and deflected away for a goalkick.

The game continued to throw up controversy when in the final minutes a cross / shot from Davison was parried by the Dawson and Johnson nipped in but his shot hit the keeper in the face and rebounded out of play, resulting in a goal kick and a booking for Johnson.

This was a game that could have been won by RCA but for some poor decision making and lack of concentration at key phases of the game which resulted in goals to the opposition. This was a harsh lesson but one that they will need to learn from and quickly.

Take nothing away from Northallerton they took advantage of the chances created and when called upon to defend frustrated the RCA forwards.

This game, funnily enough, might help us against Frickley next week as I am led to believe that they set out to frustrate the opposition.

Next up is a trip through the Tyne Tunnel to North Shields on Wednesday, 18 August 2021. Kick off 7.30pm. This will be another stern test for the lads.