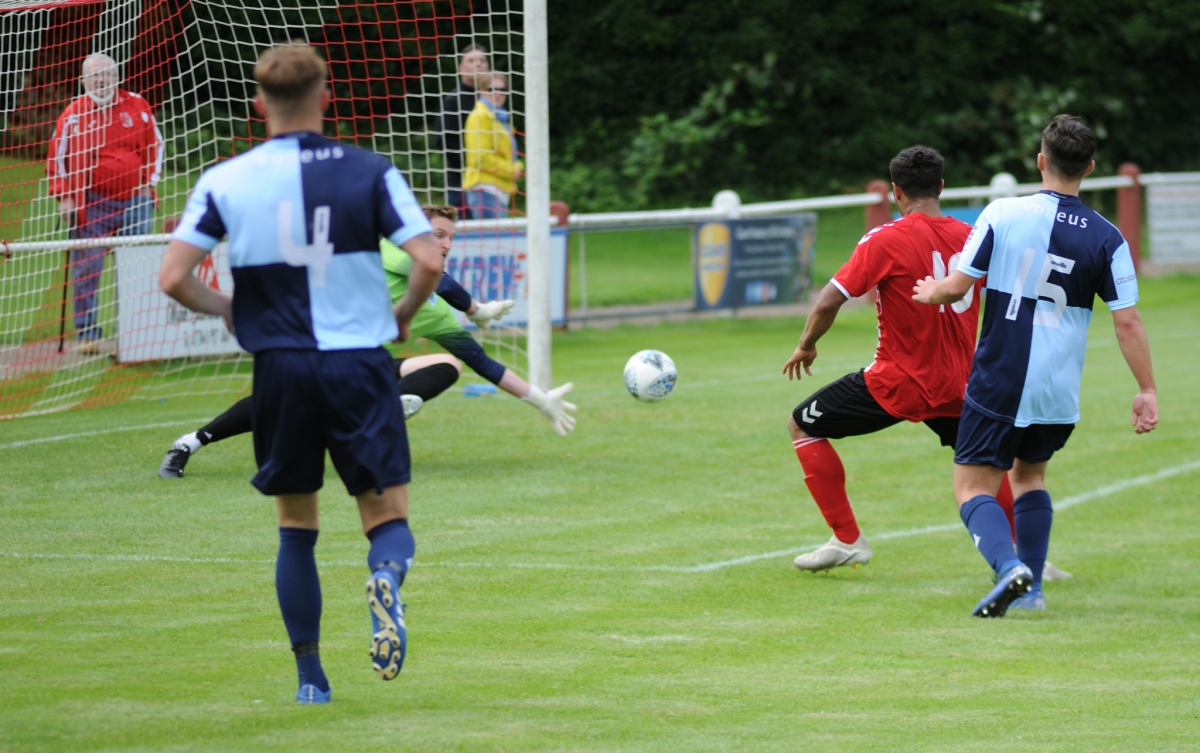 Sunderland RCA welcomed Bishop Auckland to Sunderland LGV Park for this Extra Preliminary round of the FA Cup. Both sides have enjoyed good runs in this competition in recent years and would be looking to kick start another run today.

The pitch looked in superb condition and the forecast of rain before kick off did not materialise. So the stage was set for an entertaining afternoon of football.

The management team made three changes to the team with Carr, Swansbury and Richardson replacing the injured Lawrence, Coghlan and Thompson. Both Thompson and Johnson were not fully fit but were included on the bench.

RCA with the advantage of the slope in the first half pressed forward from the kick off and in the opening minutes Richardson skipped past his marker before sliding the ball to Annang-Colquhoun but his shot was blocked by Pilling.

Within minutes RCA were back on the attack, this time Hawkins won the ball in midfield and it broke to Hennis who strode forward before firing in a low effort which was easily saved by Liversedge.

Bishops first attack saw Hewson and Winn combine to force a corner, the ball was floated to the back post where Jakab scrambled the ball away to the edge of the box where Hennis beat Ameen to the ball to clear.

The home side went straight back on the attack with a long ball forward which caught the Bishop defence napping, the ball fell between Richardson and Liversedge, Richardson got a touch and was fouled by the Bishop’s keeper. Davison blasted the resulting free kick straight into the wall and the ball was cleared.

It was one-way traffic at this point with RCA dominating possession. Annang-Colquhoun won a corner on the right which was taken by Fairley, Swansbury rose well but could only direct his header over the bar.

RCA took the lead in the 13 minute, a good run by Annang-Colquhoun end with him being fouled on the right edge of the box. Fairley took the free kick which he directed perfectly onto the head of Davison who made no mistake, heading home from 8 yards out.

Two minutes later it was 2-0 when Jakab took a quick throw-in on the right the ball bounced kindly for Annang-Colquhoun who hooked the ball into the penalty area and Davison rose above the Bishop defence to send a powerful header out of the reach of Liversedge.

Davison almost secured his hat-trick in the 21 minute when Fairley took a quick corner on the left, Carr picked up the ball and drilled it into the box but Liversedge, diving at the feet of Davison, denied the RCA striker.

The pressure was maintained by the home side and the visitors were finding to difficult to get the ball out of their own half and when they did the RCA defence were well capable of stopping the ball reaching Marrs.

Bishops only chances came from corners and in the 38 minute Errington, under pressure, conceded one. The ball was crossed to the far post where Swansbury headed clear, the ball fell to Gardner who drilled the ball through a crowd of players but well wide of the target.

In the dying minutes of the half RCA almost went 3-0 up when Richardson broke past two defenders into the box before clipping the ball past the advancing Liversedge , the ball looked to be drifting toward Annang-Colquhoun who only had to tap the ball in from a foot out but somehow Rutherford managed to get across to block the shot and the ball was cleared.

The second half started well for RCA and it only took three minutes for Davison to complete his hat-trick a good run by Carr on the left created space for a through ball to Hennis, who picked out Davison on the edge of the box where he controlled the ball well before drilling in a low shot beyond Liversedge and into the far corner of the net.

RCA were well on top and continued to press forward at every opportunity as Bishops visibly wilted under the pressure and it wasn’t long before three became, four with that man “Sparky” Davison adding another to his tally forcing the ball over the line after a goalmouth scramble.

The game was put to bed in the 63 minute when Hennis won possession on the half way line slipped a reverse pass to Carr who outpaced the Bishop defence before setting up Annang-Colquhoun who made no mistake guiding the ball into the net to make it 5-0.

The only blemish on a very good RCA performance came in the 68 minute when Swansbury underhit a pass which left Marrs in a race to win the ball against Winn the RCA keeper won the race but his clearance struck the Bishop’s forward and rebounded into the net.

In the closing stages both teams had chances to add to their tally, Fairley had a good shot saved by Liversedge while at the other end Lane had a shot cleared off the line by Swansbury.

Fairley’s final contribution to the match was a long range effort which flew agonisingly wide of the post.

This was a dominant performance against a below par Bishop Auckland team and the score line could so easily have been in double figures. Defensively we were well drilled and organized. Midfield battled for the ball and were creative in possession and up front we frightened the opposition with our pace. Finally, what can we say about this performance of “Sparky” truly outstanding, four goals in his 200th appearance for the club giving him a total of 121 goals.

Due to Whitley Bay drawing with North Ferriby in their FA Cup Extra Preliminary match our match with them on Tuesday has been cancelled.

Therefore our next match is Northallerton Town at Sunderland LGV Park on Saturday, 14 August 2021.