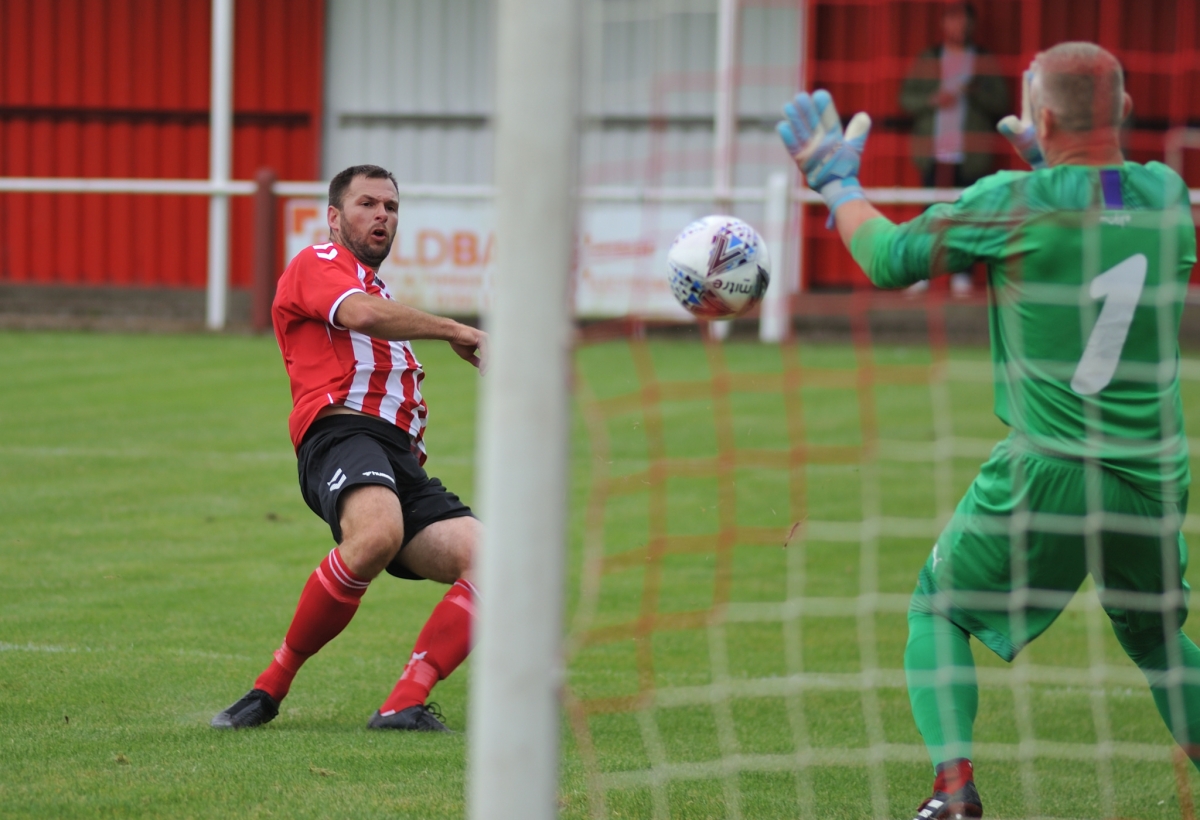 Match winner Mark Davison warms the hands of Ryhope CW's James Winter during the first half of the match.

A very warm welcome back to football to our supporters who have been denied access to league matches since last December.

Since the start of the enforced lockdown there have been a number of changes at Sunderland LGV Park. The refurbished stand and re-painted clubhouse front are looking superb while the pitch is looking immaculate thanks to the magnificent efforts of the groundstaff. Dave, George and Graham ably assisted by Norman.

There have also been many changes to the team with the resignation of Martin Swales, his successor Steve Riley brought in Leon Carling and Dan Madden to assist him and they have quietly gone about the process of rebuilding the team with a mixture of Youth and Experience.

The league season began with the visit of neighbours, Ryhope CW to Sunderland LGV Park for the first local derby of the season.

A decent crowd of 168 were in attendance for the start of this long awaited resumption of competitive football.

RCW took advantage of the slope in the first half  looking to force the pace of the game but RCA were able to defend well and the opening 10 minutes passed without either keeper being asked to get involved.

The first real attempt on goal came in the 12 minute when Gordon played the ball forward to Hird on the edge of the RCA penalty area and he laid it into the path of Wallace but his effort flew wide of the upright.

The visitors kept up the pressure forcing two corners, both of which were well dealt with by the new look RCA defence.

Having withstood a 5 minute period of pressure from RCW the home team took the game to their opponents. Coghlan found Annang-Colquhoun with a superb 30 yard pass which released the winger beyond his defender he cut the ball back to Johnson who fired in a first time shot which was well saved by Winter.

A minute later and RCA were awarded a freekick when Annang-Colquhoun was fouled.  Coghlan floated the ball to the back post where Johnson connected with a smart volley which Winter saved brilliantly before the assistants flag went up for Offside.

The home team were pushing forward and playing some good football, a through ball from new signing Jakab found Davison who turned and fired in a shot which skimmed the bar.

RCA almost took the lead in the 26 minute when Annang-Colquhoun got the better of his marker before playing the ball to Davison who, spotting Winter off his line, chipped the ball over the keeper but it drifted just over the bar.

RCW responded with their best period of the game with a sustained attack which saw both Bird and Wallace go close. A driving run from Vincent forced RCA back and his pass in to Bird was blasted into the side netting by the nippy forward.

The game settled into a midfield battle with neither team getting on top and a number of niggly fouls being committed. Both Hawkins and Hennis did well competing to win the ball and stopping RCW from getting a foothold on the game.

RCA almost took advantage of one such foul when a quickly taken free kick was played to Hennis but he fired wide of the target.

Two minutes later and Winter was called upon to make a good save from Johnson after the RCA striker has wriggled his way through two tackles to get in a shot.

The best chance of the half so far fell to the visitor’s when Vincent played the ball to the overlapping Wade who sent in a wicked low cross to the far post for Bird but with only the Marrs to beat he hit his shot into the side netting.

In the final minutes of the first half RCA took the lead when Johnson played a great through ball to Davison whose first touch took him away from his marker and he was able to slot the ball into the net past a helpless Winter.

The second half began in dramatic fashion when Johnson picked up a loose ball in midfield and let fly from 35 yards out and the ball thundered off the bar before being cleared.

A long ball out of defence by Errington found Lawrence free on the right but his cross was easily cut out by Winter.

RCW came back into the game and were awarded a free kick on the edge of the box, Wade whipped in the cross but it was lifted over the bar by Hird under pressure from Jakab.

Within a minute the visitors could and possibly should have equalised when a good ball into the box from Dart was met by Wade in acres of space but he side footed wide of the goal.

This was a wake up call for RCA and the responded appropriately with a great attacking move, Hawkins played the ball to Annang-Colquhoun who in turn found Best his cross was met by Johnson who struck a great shot forcing a fantastic save from Winter.

The home team were looking to finish off their opponents but Winter in the visitors goal was in fantastic form and when Best broke forward and unleashed what looked like an unstoppable shot the RCW keeper once again pulled off an unbelievable save to turn the ball round the post for a corner.

Inspired by this RCW picked up the pace of the game send on two extra forwards to try and get something out of the game but they were met by a very resilient defence who were giving nothing away.

For all their pressure in this period of the game they didn’t have one shot on target.

With the game In the final minutes Carr played a lovely ball forward for best who drove into the box managed to get past Winter but somehow the ball was blocked by Wade and by some fluke fell into the arms of Winter denying Best a second chance to score.

An entertaining match ended with the home team victorious.

While this was the first game of the season and there is a long way to go there were a lot of positives to be taken from this match.

The defence, although very young, played really well together. The midfield worked tirelessly in closing the opposition down and up front we have experienced forwards who know where the net is.