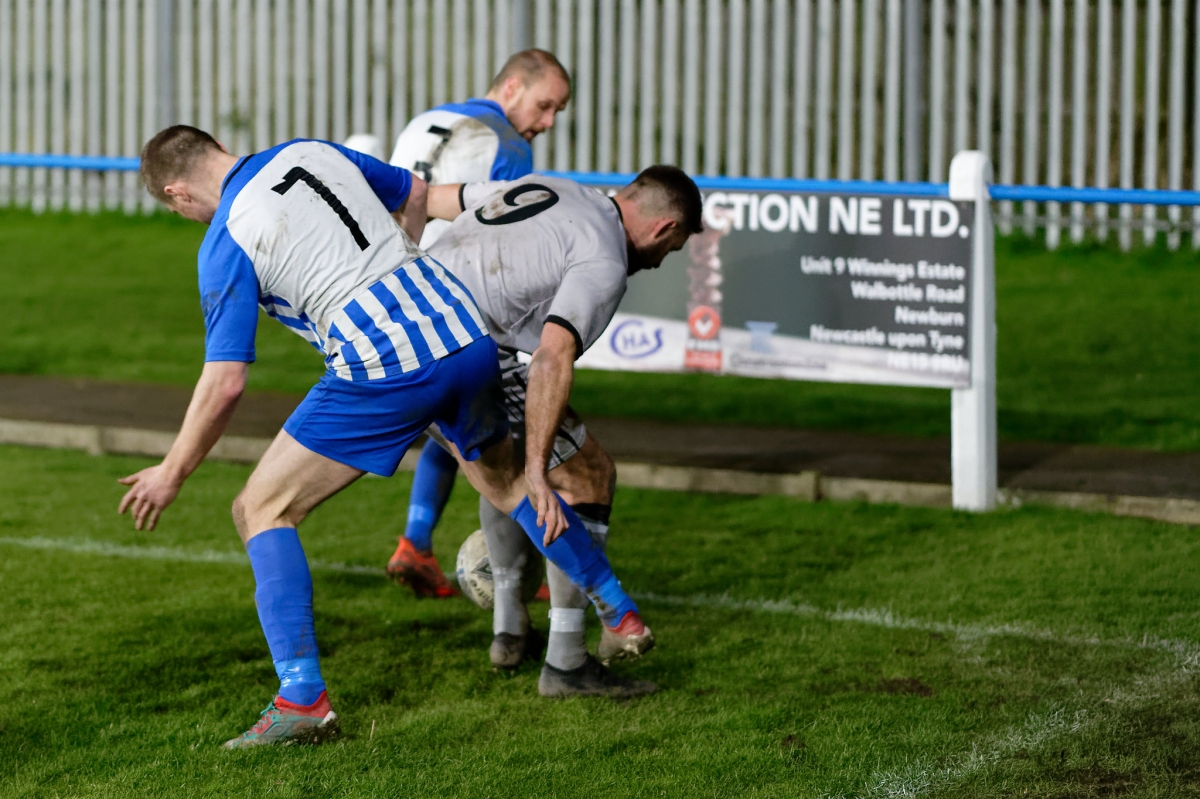 Mark Davison runs down the clock in the final seconds of the match.

Sunderland RCA headed up the A19 to play Newcastle Benfield at the Sam Smith Sports Ground in this Ebac Northern League Division 1 fixture.  Defeat in this game would set an unwanted record of seven straight League defeats.

Benfield kicked off with the advantage of the wind and were quickly into their stride playing at a high tempo; to their credit RCA more than matched the home team in the early exchanges although neither keeper was tested as both teams' defence held firm.

The first real chance fell to Benfield when Cooper played a delicate through ball into space for Giraud to run on to; however his shot was badly timed and missed the target by some considerable distance.

With 15 minutes on the clock the ball was switching from end to end as both teams looked for an opening, Slaughter picked up the ball on the edge of the box after some good build up play by Cooper and Noble but his final shot went well wide.

A minute later at the other end and Allen slipped the ball forward to R Leonard who tried his luck from the corner of the penalty area and his dipping shot was only inches over the bar with Grainger looking well beaten.

There followed a period of midfield play by both teams with little direct goalmouth action.

RCA took the lead in the 24th minute when Swansbury played the ball wide to Davison, he jinked his way to the edge of the box before delivering a near post cross which R Leonard managed to anticipate in front of the Benfield defence and his deft clipped shot flew past Grainger and into the net.

Benfield almost capitalized and a misplaced defensive pass in the 26th minute but the cross into the box was dealt with by Swansbury, heading clear, under extreme pressure from Brayson and Cooper.

RCA looked to increase the tempo and were unlucky not to add to their tally on the half hour mark. Good play down the left saw Lawson cut inside before playing the ball into the box where Davison controlled the pass before trying to lob Grainger but the Benfield keeper showed all his experience to pluck the ball out of the air.

Benfield reacted to this with a spell of pressure and a quick counter attack almost caught the RCA defence out when Robson sent a long ball forward to Slaughter but his low drilled shot flew wide of the target.

The visitors again picked themselves up with R Leonard finding space on the left and time to pick out Elliott in a good position on the edge of the box but he fired his shot wide.

The home team finished the half by pressurising the RCA defence, a weak effort by Glen-Ravenhill was easily saved by Dean but a minute later and into injury time the RCA keeper was forced to tip a Giraud shot onto the post and away for a corner.

RCA started the second half well as they pressed the Benfield midfield and tried to capitalize on the home teams mistakes.

In the 47th minute a through ball from Allen was picked up by R Leonard who crossed into the box where Davison was on hand to smash a shot against Robson and the ball flew out of play for a corner.

The visitors were ramping up the pressure and another ball forward by Allen was brought down by Davison who calmly drifted past Grainger but he delayed his shot long enough for Scorgie to be in place to head the RCA striker's shot off the line.

As the game approached the hour mark it was almost one way traffic as another R Leonard cross was clipped over the bar by Davison.

Against the general run of play in the second half Benfield almost equalised when a good run by Glen-Ravenhill ended with an excellent pass to Giraud who drove his effort against the bar and Allen cleared the danger.

Within seconds the ball was at the other end and a poor clearance fell to K Davis, 35 yards from goal, he looked up and spotting Grainger out of position fired in a shot which flew over the keeper and into the net, a sublime finish by the quick thinking striker.

The early tension seemed to disappear from the RCA team and they started to play with a confidence which has eluded them in recent matches and they looked solid in defence.

The visitors should have killed the game off in the 65th minute when R Leonard picked up a clearance from Allen, slipped the ball forward to K Davis who burst into the Benfield box before cutting the ball back to Davison who slammed his first time effort against the bar and the danger was cleared.

In the 76th minute Benfield got back into the game, they won a corner on the right which was driven towards the front post, it was flicked on and evaded everyone until it reached Brayson at the far post and he smashed the ball past Dean into the net.

As the game moved toward the final 10 minutes, Slaughter was sin-binned for a comment to the referee after disputing a decision.

RCA, with the extra man advantage, tried to pass the ball making the opposition chase the game and they did so to some effect with the majority of the final ten minutes being played in the Benfield half but without any real efforts on goal.

The reintroduction of Slaughter as the game entered four minutes of injury time did spur Benfield on but Swansbury and Co. in the RCA defence were in no mood to give anything away and the final minutes were played out near the Benfield corner flag as Davison and Lawson held onto the ball, gaining a number of corners and killing the game.

Throughout the team this was a much more convincing performance than the second half at Whickham. Defensively we were solid with only a few lapses of concentration. The midfield was more fluid than in previous matches and playing Ryan Leonard in front of Max Allen gives the team more balance and both forwards put in a shift to make sure we came away with a victory.

We now need to take this forward into the remaining games of the season starting with the match on Saturday away to West Auckland, kick off 3.00pm.