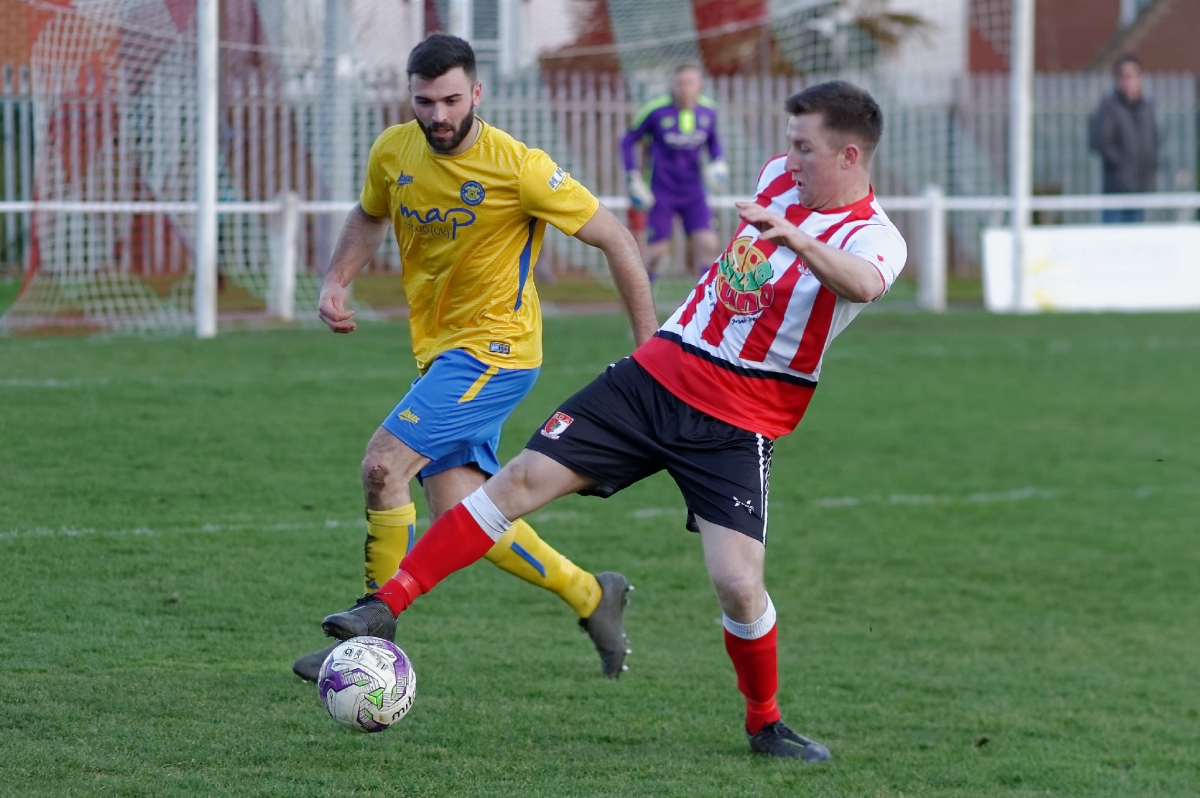 League leaders Stockton Town were the visitors to Sunderland LGV Park for this EBAC Northern League fixture. Having lost only one league match all season Stockton Town are firm favorites to finish in top spot.

Sunderland RCA were without the services of Work Experience loanees Ryan Leonard and Connor Slack for this game, both have been included in the Sunderland AFC under 23 squad to play Liverpool FC.

The RCA management team, looking to halt a run of poor results, named an experienced side for this tough match.

Stockton Town kicked off with a strong wind at their back and with the advantage of the slope the proceeded to dominate the first 10 minutes of the match as they went in search of an early opener.

In the 3rd minute the visitors were awarded a corner which was swung to the back post where Nicholson, unmarked was able to power in a header which McNab hooked over the bar to keep the scores level.

RCA, having survived the early onslaught by the visitors, started to threaten and a good break down the left by Lawson was spotted by Hennis, the RCA winger tried his luck from the edge of the box but it was deflected for a corner. The corner was met by Swansbury but was blocked and cleared by Nicholson.

The visitor’s next chance fell to Franks who ran onto a through ball from Portas but sliced his effort well wide of the upright.

The Anchors took the lead in unusual circumstances, awarded a freekick deep in their own half, goalkeeper L Roberts took the kick sending it into the RCA penalty area where, under no pressure, Dean misjudged the flight of the ball allowing it to bounce and he was unable to stop the ball crossing the line for the opening goal.

The home team were almost level in the 25th minute when C Davis ran onto a pass from Hennis, burst into the penalty area before drilling in a low shot which L Roberts managed to hold with Davison ready to tap home had he have missed it.

Portas was seeing a lot of the ball in the centre of the park and was using the ball to great effect; a through ball to Franks again opened up the RCA defence and produced a brilliant save from Dean.

In the 39th minute McWilliams found Franks wide on the left where he outpaced the RCA defence before clipping a perfect cross onto the head of Woodhouse and he headed home from five yards out.

Dean was forced to pull off another fantastic save after Franks played a lovely through ball to Woodhouse who smashed his shot goal wards.

In the last minute of the half RCA were awarded a corner which was taken by Elliott, the ball was partially cleared but fell to Lawson on the edge of the box and he curled his shot inches over the bar.

The second half saw RCA trying to take the game to Stockton and in the opening minute of the half a cross into the box by K Davis was miscued into the air by Nicholson and in the scramble that followed there was a strong appeal for a penalty which was waved away by the referee.

Within a minute the hosts were back on the attack, C Davis playing the ball to Elliott who crossed into the box where O’Neill was unlucky with a flying header which he couldn’t direct on target.

Stockton’s response saw Woodhouse break down the left, cross into the box where Owens picked up the ball and fired in a low shot which Dean managed to tip onto the post collecting the ball at the second attempt.

A throw in on the right created the next scoring opportunity when Owens received the ball and smashed a thunderbolt of a shot which Dean did well to parry and dive at the feet of Woodhouse at the expense of a corner.

However RCA’s relief was short lived as the resulting corner was poorly dealt with at the front post with three RCA players getting in each other’s way and the ball falling at the feet of M Roberts who fired in a low cross which was turned into the net by the unmarked Nicholson from two yards out.

From the kick off RCA almost snatched a goal back when C Davis played the ball forward to Elliott who cut the ball back into the path of Davison but the striker fired well over the bar.

The visitors looked to play the ball around in the final 20 minutes and made it difficult for RCA to get any meaningful possession.

RCA’s only real chance of a disappointing second half fell to K Davis who picked up a ball from O’Neill before curling it beyond the outstretched hand of L Roberts but it struck the crossbar and was cleared by McWilliams.

Stockton had one final effort when Craggs set up Owens and although his shot was deflected goal wards by Swansbury, Dean was able to claw the ball away.

Stockton Town was well worth their victory as there no nonsense approach to the game reaped massive rewards. Defensively they have a solid base with no frills, their midfield work relentlessly and seem to create massive amounts of space, while their forwards are unerringly accurate in front of goal.

Unfortunately, RCA have been beset by an unparalleled level of injuries which has left us short in key areas for long periods, this has also led to a low level of match fitness.