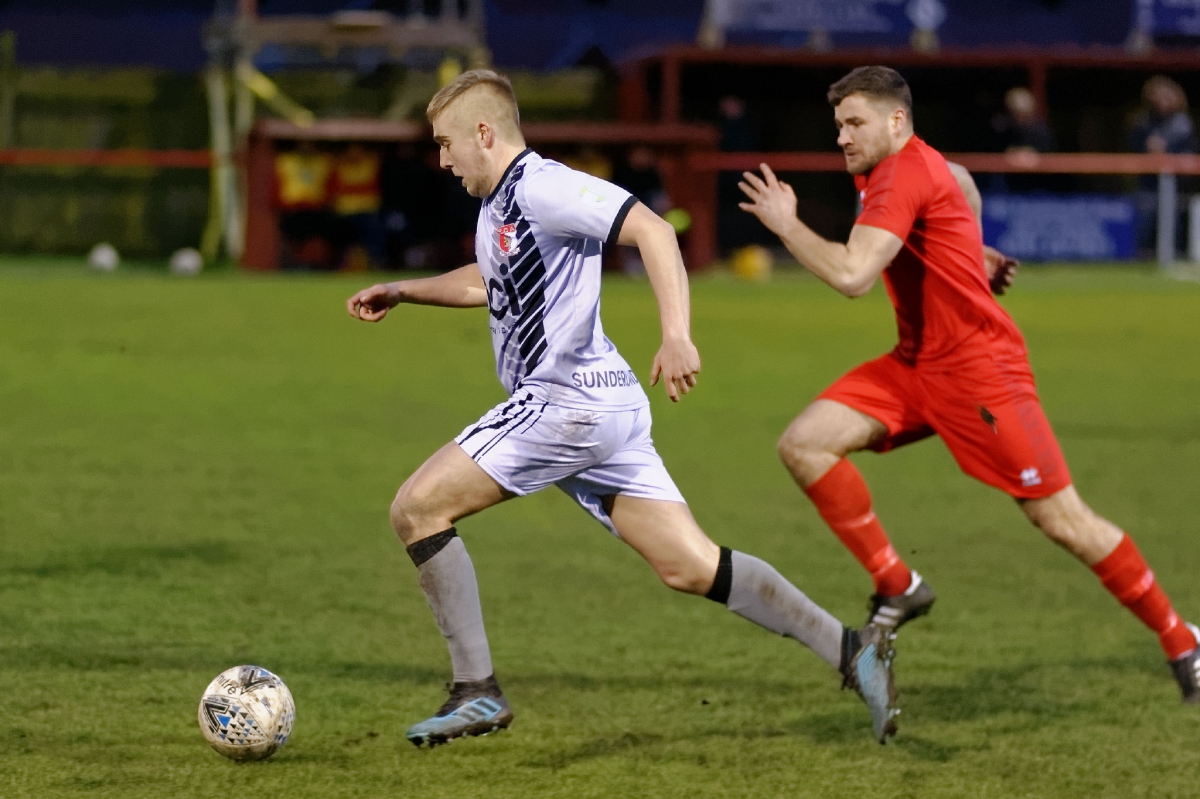 The game kicked off on a bitterly cold day with RCA kicking into a strong, freezing, wind.

Shields had the first chance of the half when McDonald played a lovely through ball into the path of Robinson but Dean was quick to spot the danger, rushing off his line to block the shot.

As the game progressed it became a midfield battle with neither team creating anything in the final third.

The “Robins” came closest to scoring when Cassidy broke down the right before delivering a good cross into the box where Carr glanced a header wide of the post.

RCA were forced to defend for long periods of the first half as the home team looked to capitalize on the advantage of the wind, however, there was no real threat inside the RCA penalty area and some resilient midfield tackling kept the home attack relatively quiet.

Shields only other chance in a dismal first half was a freekick taken by Cassidy which looped off the RCA wall and flew over the bar.

The referee brought a miserable first half to a close. North Shields looked the better team in the first 45minutes but it was not a very convincing performance from either team, in the words of a well known song by Howard Jones “Things can only get Better”.

RCA started the second half in explosive fashion with a number of slick passing moves which had the Shields defence scrambling to clear their lines.

In the 48th minute, Davis won back the ball before playing it to Elliott who in turn played a wall pass with Lawson he then slipped the ball to Davison on the edge of the box and the RCA striker fired in a low shot which flew into the bottom corner of the net to give RCA the lead.

The visitors were dominating possession and another great move saw Allen play the ball to Best who slipped the ball to Davison, his shot was blocked and the rebound fell to Lawson who struck a brilliant volley which hit the angle of the crossbar and post and Purvis was able to get a hand to Elliott’s follow up shot.

The resulting corner was headed down by Davison and cleared off the line by McDonald.

There followed a scappy period of play where a number of players from both sides were rightly cautioned for reckless challenges.

North Shields almost equalised when McDonald found space on the left wing, played the ball to K Patton who slipped his marker before cutting the ball back to his brother C Patton but his shot flew high over the bar from a promising position.

With the game now in full flow and in stark contrast to the first half, both teams are now pushing forward, McDonald again instigated a move down the left and his cross into the box was met by McArthy but Dean managed to parry his shot and the rebound was fired wide by Carr.

A minute later at the other end a penalty appeal was turned down after Davison looked to be hauled to the ground by New.

RCA double their lead in the 74th minute when McNab took a throw in to Best who cleverly beat the Shield’s defender before threading a sublime pass into the path of O’Neill who, sliding in, managed to guide the ball past the despairing dive of Purvis and into the far corner of the net.

The visitors again took control of the game and were almost three up when Davison latched onto a through ball from Elliott but fired inches over the bar from 25 yards out.

However, the visiting RCA supporters didn’t have to wait long for the third goal, a freekick taken by Allen was headed away as far as Davison, his shot was blocked but fell to Elliott 25 yards out and he smashed in a thunderous shot which flew into the top corner of the net.

RCA seemed, understandably, to take their foot off the pedal and let North Shields back into the game in the final five minutes of the match.

In the 87th minute Carr gave the home team a glimmer of hope when he snatched a consolation goal, scrambling the ball home after his initial header was blocked on the line.

The visitors defended brilliantly in the final minutes to deny the Robins any hope of getting something from the game and deservedly ran out 3 – 1 winners.

RCA stuck to the game plan in the first half and frustrated the opposition as they gave them little time to settle on the ball and restricted them to only a few long range efforts. The second half saw a more expansive system of play as they got into their passing game and almost completely dominated the midfield.

Elliott, Lawson and Best were excellent today while the back five looked to be getting back their early season consistency. Davison and O’Neill popped up with crucial goals and K Davis ran his socks off for the cause. This was a good second half team performance and credit must be given to the management team who seem to have found a winning formulae.