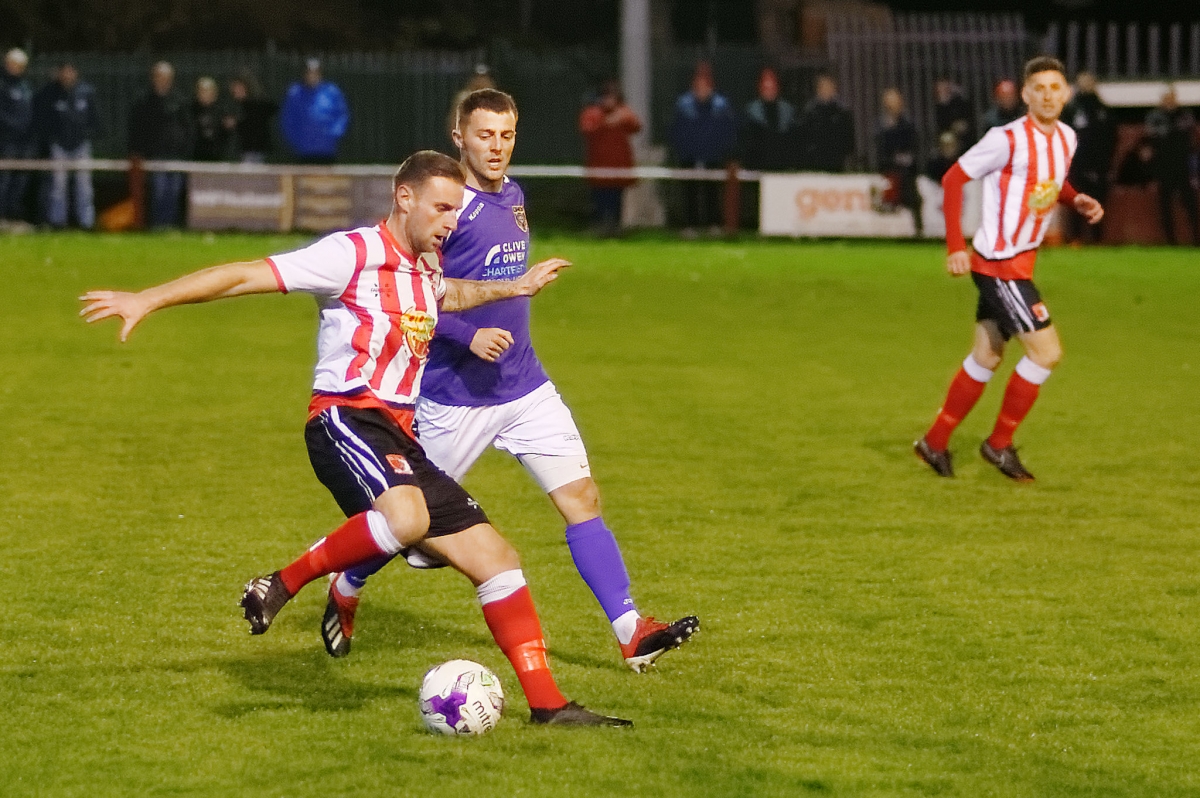 Aaron Croft clears the ball during the first half of the match.

The League Cup Group stage match against local rivals Ryhope CW took on more significance for the visitors as a RCW draw or better would see them progress in the competition, RCA having already assured themselves of a place in the last 16 with their win against Washington FC last week.

As usual for this competition the RCA Management team made a number of changes giving younger players more experience at this level and players returning from injury much needed playing time.

The early exchanges on a sticky pitch saw both looking to attack in true Derby style. RCA won a corner on the right which was cleared up field by Riding and RCW won a corner at the other end.

With five minutes on the clock another RCW corner was cleared by Swansbury, it fell to Hotchkiss on the edge of the box but his first time half volley flashed over the bar.

Moan picked up a pass from Croft and fired in a low shot which was well saved by Harkess, the clearance from him fell to Leonard who darted forward before sending in a wicked cross which M Weirs blocked for a corner.

RCW were building up some pressure on the RCA defence, a move from the back saw the ball moved quickly forward by Jones to Hotchkiss, he, in turn played the ball to Riding on the edge of the penalty area but his shot flew over the bar.

RCA had young keeper Ezard to thank for keeping the scores level in the 20th minute, Hotchkiss played a delightful ball forward to Ellis inside the area but the RCA keeper charged off his line to close him down and make a last ditch save.

The visitors were having the best of the play during the first half as RCA were forced back into their own half for long periods, Rae was unlucky not to open the scoring in the 17th minute when he was played in by Ellis but he shot into the side netting from an acute angle.

A run down the right by Bird took him past his marker and he produced a great ball into the box were Ellis flicked a header wide of the upright.

In response RCA pushed forward and Leonard picked up the ball on the right before crossing into the box were Callen headed wide.

With the game heading into injury time RCW broke quickly down the left, the cross looked to be well covered by Allen but, on a slippy surface, he mishit his clearance and it fell to Bird inside the six yard area and he smashed it home to give the visitors a half time lead.

During the half time interval the crowd was entertained with a penalty shoot-out with Sunderland RCA UNO players taking it in turn to try and beat Robbie Dean. (I think Robbie came off second best).

After the dramatic finish to the first half the start of the second half was a bit of a damp squib with little in the way of goalmouth action.

It picked up a little as the rain started to fall, Ellis cutting in from the right fired in a low shot which Ezard did well to save diving to his left.

RCA then pushed forward looking for the equaliser a through ball from Croft found Leonard and although he was quickly closed down he squeezed in a cross which was met by Moan but he fired wide of the target.

A minute later and Hodgson dispossessed Hotchkiss in midfield and sent a looping forward pass into the penalty area where O’Neill met on the volley but could only steer it wide of the post.

On the hour mark RCA almost equalized when Swansbury played a great ball forward to Callen who controlled the ball magnificently but with only the keeper to beat got the ball stuck under his feet and Jones was able to get his foot to the ball to clear.

The rain was now very heavy and the playing conditions underfoot were making it difficult for the players, demonstrated when Leonard sent a wonderful cross into the path of Croft 8 yards out but he was unable to control the ball in front of goal and Riding was able to clear the danger.

RCA changed tactics with 15 minutes to go sending RCA captain Swansbury up front with O’Neill and dropping Moan into a more central role, it almost paid dividends immediately when Callen swept past his marker to power in a cross which Swansbury managed to head straight at a relieved Harkess in the RCW goal.

In the 80th minute the RCW keeper was called upon to make an outstanding save when Swansbury played Leonard through, the SAFC loanee took the ball in his stride before hitting a fierce drive which struck a bewildered Harkess and ricocheted away for a corner.

RCA were turning the screw now and in the final throws of the game should have had a penalty when a Callen was clearly held when trying to get onto the end of a Leonard cross but the referee waved play on.

Deep into injury time RCA had another chance when O’Neill picked up a pass from Swansbury and fired in a shot which was saved by Harkess, the rebound fell to Swansbury whose shot was blocked by a combination of Riding and Jones who threw their bodies into the path of the shot.

Both teams now move on to FA Vase matches on Saturday, 2 November.

We wish RCW all the best in their match against Vauxhall Motors.