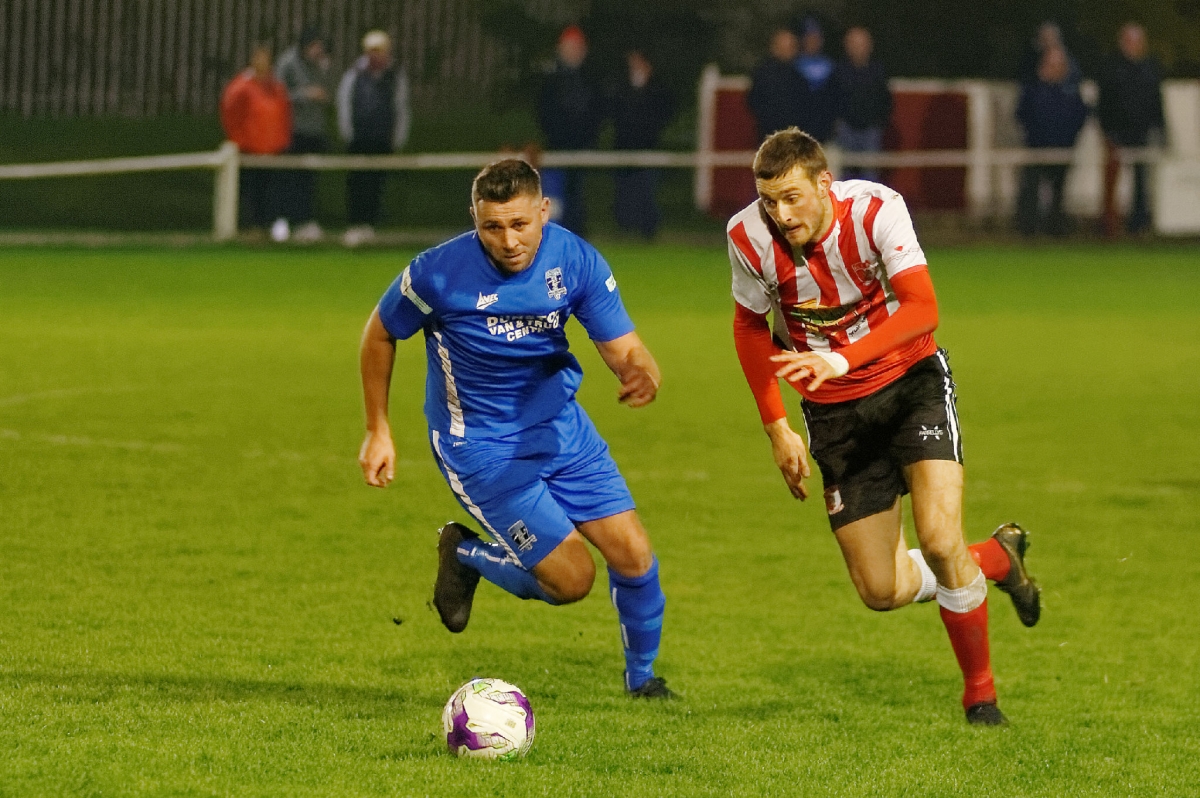 Match winner Nathan O'Neill on the attack in the second half of the match.

The Durham Challenge Cup paired us with Dunston in a re-run of the FA Cup fixture earlier in the season when Dunston needed a replay to progress to the next round. RCA therefore had a point to prove.

With Leonard cup tied the RCA management team brought in Josh Gray as a straight replacement. Sam Lilley replaced Ross McNab in the starting line-up and there was a welcome return on the bench for Clayton Davis who was returning after a long lay off with a Hamstring problem.

As in the previous match between the two sides RCA elected to defend against the slope and Dunston took advantage with some flowing passing and movement which pegged the home team back in their own half.

Dunston took the lead in the 4th minute when a long crossfield ball from Marrs found Brooks who outpaced Lilley before cutting the ball back for Thear to hammer home.

RCA responded well to this early setback and Callen on the left started their first real attack of the game when he played the ball in to Davison but his shot was blocked by Hall.

The home team equaliser in dramatic fashion in the 11th minute when a poor clearance from Dryden was picked up by Gray, he stepped past a Dunston tackle before unleashing a terrific shot from fully 35 yards out which rifled into the top corner of the net, well worth the entrance fee on its own.

On a heavy pitch the game became a bit scrappy with neither team really threatening until the 19th minute when Dunston were awarded a freekick on the right, Marrs crossed the ball to the far post where Brooks was able to hook the ball back to Page but his first time volley sailed wide of the upright.

Dunston continued to attack down the slope and with 25 minutes on the clock Marrs played the ball forward to Thear who struck a fantastic shot against the inside of the post, unfortunately for him the ball rebounded to safety and the assistant referee’s flag was up for offside.

RCA were riding their luck a little and were finding it difficult to get a hold of the ball, when they did they were coming up against a very solid and well drilled Dunston defence.

A long throw by Halliday caused RCA problems in the 35th minute when the initial header from Swansbury was picked up by Heslop who hit his shot on the half volley only to see it deflect off Preston for a corner.

RCA’s defence was holding up well under pressure and you could see the confidence flowing through the team as the half progressed.

A long clearance from Lilley found O’Neill on the right, he clipped the ball inside to Gray who in turn found Davison but his shot flew well wide of the target.

With the first half drawing to a close a ball forward by D Elliott was picked up by Gray who threaded a wonderful pass into space behind the Dunston defence which O’Neill ran onto and slid passed Dryden into the net.

In the build up to the goal Allen was injured and was replaced by McNab.

The second half started with both teams struggling to get to grips with the game and it became bogged down in midfield and was interrupted continually with niggly little fouls.

It wasn’t until the hour mark that there was any real threat on either goal, Marrs played a quick one two with Scott before sending in a low cross which Swansbury did well to block for a corner.

The resulting corner was cleared to Callen who raced forward before crossing the ball to Elliott who fired wide of the target.

This seemed to give RCA a lift and a renewed belief and two minutes later D Elliott picked up a loose ball played out of the Dunston defence and sent in a first time shot which had Dryden struggling to save.

RCA were putting some good moves together now and almost increased their lead when Callen broke down the left wing before crossing into the box to O’Neill, his shot was saved by Dryden and fell to D Elliott who fired in a low shot which Hall somehow managed to turn away for a corner.

The next home team chance fell to Gray after Hodgson intercepted a pass and played in O’Neill, his cross field ball found Gray who fired wide of the far post with both Davison and Callen in promising positions inside the penalty area.

A poor clearance from the resulting goalkick landed at the feet of Davison who shot low and hard and produced a good one handed save from Dryden.

Two minutes later and RCA were awarded a freekick on the edge of the box. Elliott floated the ball to the far post to Davison who headed it back across the face of the goal to O’Neill who managed to get in a header but it went over the bar.

Dunston introduced J Elliott into the game and he had an immediate impact receiving the ball on the right wing he cut inside two defenders before slipping the ball to Scott but he fired wide.

Within a minute J Elliott picked up a through ball from Page, dribbled his way inside the box but his final pass went out for a goalkick.

A long ball forward by McNab was headed away by Grant-Soulsby, it fell to Davison who hit a terrific shot from the edge of the box which Dryden did brilliantly to tip over the bar, the resulting corner by Elliott was met by Davison who powered in a header which struck the underside of the bar and was hooked clear by Hall.

After this prolonged RCA pressure Dunston finally started to apply pressure of their own, a lovely through ball by Scott was picked up by Heslop but his effort on goal was blocked by Gray.

A minute later and the visitors were awarded a freekick which was taken by Marrs, he tried to curl it round the wall but it took a deflection for a corner.

RCA were forced to defend in numbers as they held on to their slender lead, a good run by Scott threatened to break their resistance but the Dunston striker fired over the bar when in a good position.

On the break the home team almost wrapped up the points when Callen sprinted clear on the left, he tried to pick out Elliott in the centre but that man Hall was in the way again and blocked the cross.

Shortly after the referee blew for full time.

This was a much improved team performance and over the 90 minutes they fully deserved the win. They have set the bar for the remainder of the season and will need to maintain this performance level moving forward.