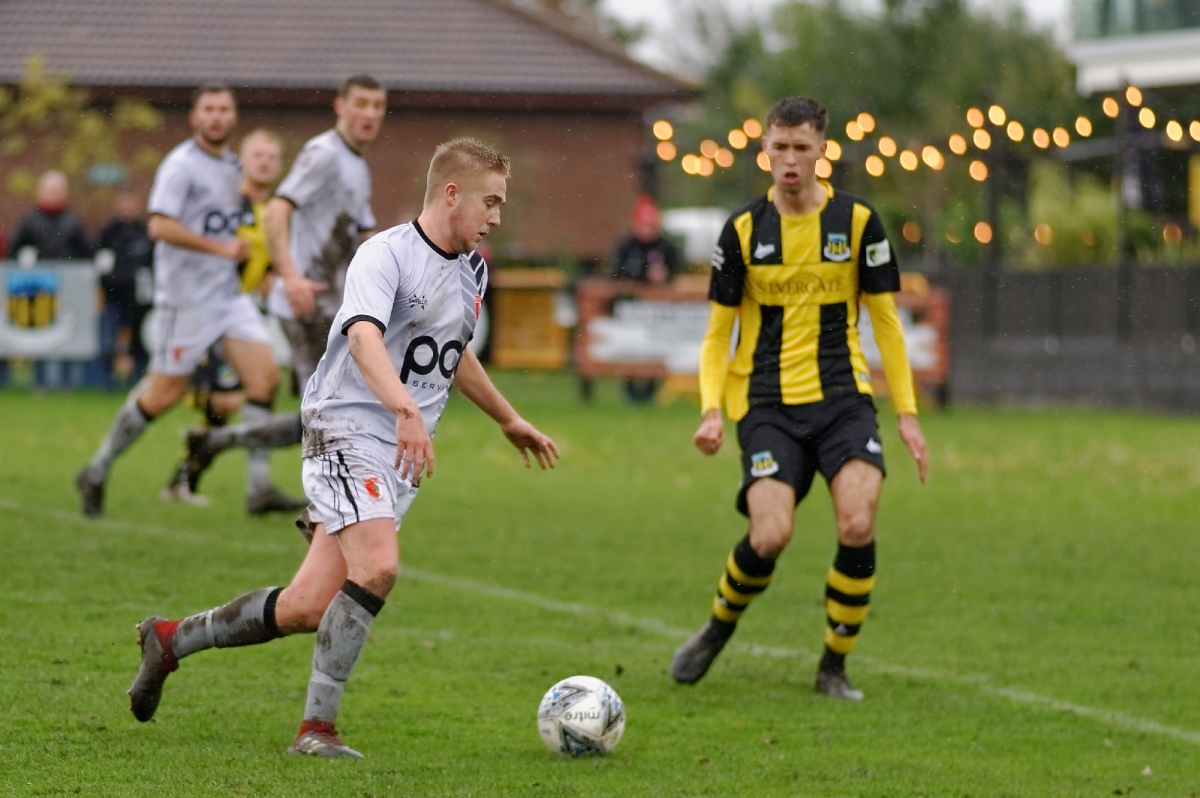 Dylan Elliott on the attack for RCA during the second half of the match.

RCA returned to league action making the short trip to play League leaders Hebburn Town. The two sides met last month when RCA claimed a late point in a tight contest and more of the same was expected today. Hebburn remain undefeated in their last 7 matches.

Torrential rain just before kick off meant that the playing surface was slippy and ball control would be at a premium.

The expected RCA team changes after Wednesday’s emphatic win at Washington were made and the teams lined up as follows:

The visitors kicked off and were soon on the attack with O’Neill sending in a cross which was headed wide by Davison.

The resulting goal kick was picked up by Elliott who played the ball to Davison his flick found Leonard in space but his shot was easily saved by Jennison.

“The Hornets “ almost opened the scoring when Taylor took a quick freekick playing it forward to Dibb-Fuller but Dean was alert to the danger and saved at the foot of the post.

Hebburn were playing the ball about and causing RCA problems with some slick passing, on the quarter hour Groves played the ball forward to Dibb-Fuller who cut inside before playing the ball to Lough and his well directed cross found Armstrong who dribbled his way into the box but his shot was well saved by Dean.

RCA were almost gifted a goal when Leonard intercepted a loose defensive pass and broke into the box but his well struck effort flew narrowly over the bar.

With both teams defending well there were few chances as the half progressed. On the half hour Hodgson won the ball in midfield and Elliott picked up the loose ball playing it out to Leonard on the left his cross was met by Davison but his header was directed just the wrong side of the post.

As Hebburn put pressure on the RCA defence, it took a great block by Swansbury to deny Armstrong when the Hebburn striker looked certain to break the deadlock.

A minute later Dean was forced into a great save when Armstrong got a good header onto a Groves cross.

A mix up in the Hebburn defence was almost punished by Davison who picked up the loose pass and fired in a low shot which Jennison did well to save.

Having been under pressure for long periods in the first half RCA started the second half on the front foot forcing Hebburn to defend deep in their own half.

Good build up play by Elliott and Allen set Leonard up with the first opportunity of the half put his shot went wide of the target.

With an hour gone Richardson was played in by Lough and from 25 yards out he tried an audacious chip which went well over the bar.

In the 73rd minute Dibb-Fuller played a through great ball to Lough and his cross shot was turned round the post by Dean for a corner. The resulting corner by Richardson was headed down by Donaghy and Dibb-Fuller inside the six yard area was on hand to stab the ball home and give Hebburn the lead.

There was an immediate reaction from RCA as they looked for a quick equaliser, Allen played the ball to Leonard who crossed into the box for Callen he chested the ball doen for Davison but his shot missed the target.

RCA were throwing caution to the wind in the closing stages and almost reaped some reward when McNab played the ball out to substitute Gray but he elected to cross the ball to the far post when a shot might have been the better option and the ball was cleared.

The visitors were back a minute later when Elliott played in Leonard but his shot from a glorious position went flying over the bar.

Disaster struck for RCA in the 89th minute when Armstrong latched onto Dibb-Fuller’s through ball ansd steered the ball past Dean.

Inside injury time Armstrong was played in, his shot was saved by Dean but fell to Dibb-Fuller who smashed the ball home from close range to make it 3-0.

This game saw an improved performance from RCA after last week’s defeat and had we took our clear cut chances the result could have been so different. We need to be more clinical in front of goal and the results will follow.

It was good to see Preston, Hodgson and Callen all get through 90 minutes which will set them up for the next challenge on Wednesday, Dunston at Home in the Durham Challenge cup, Kick off 7.30pm.