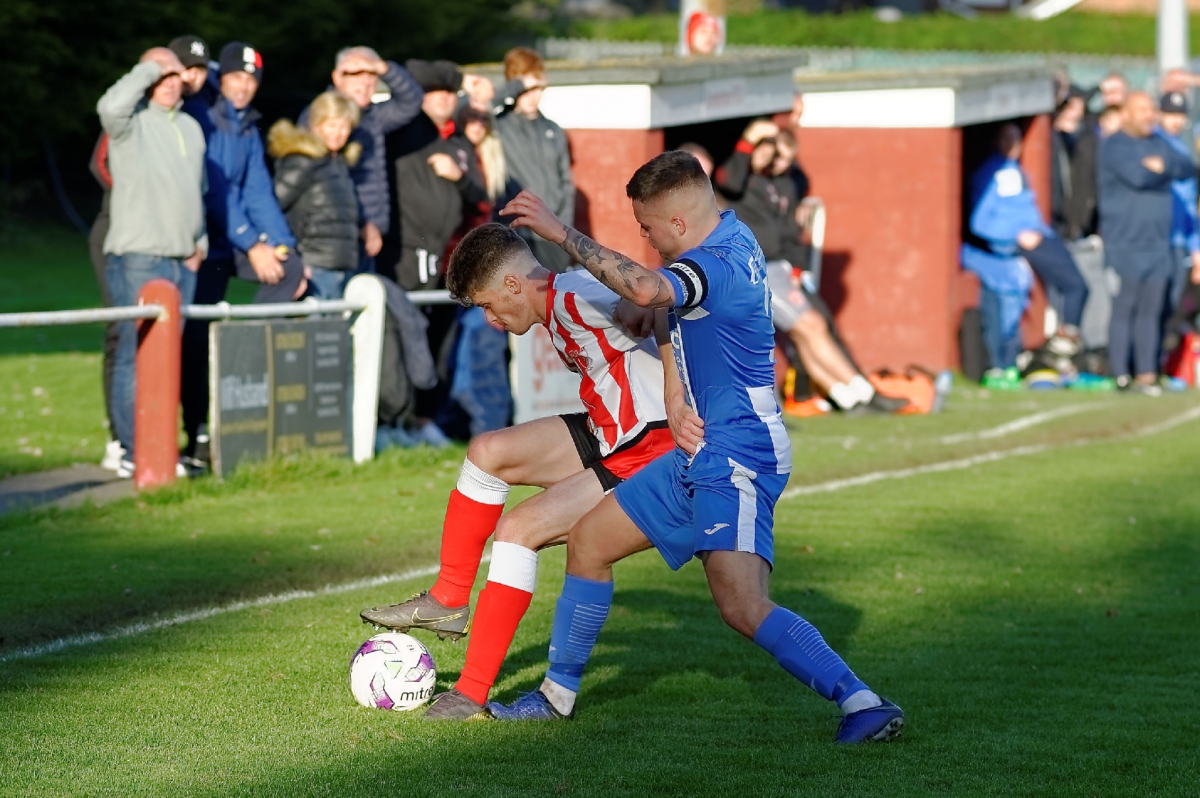 Whitley Bay were the visitors to “LGV Park” on Non-league day. We also welcomed from Norway an amateur football team called the Hellhounds. Originally going to the Sunderland v Fleetwood match at the SoL they decided to come to see RCA when that match was cancelled.

The RCA Management team minus the manager (in London) made one change to the team who beat Billingham Town in mid week. Craig Hodgson replacing Sam Lilley and the formation changing again to what looked like a 4-4-2.

Whitley Bay decided to defend against the wind and the slope in the first half and were soon on the attack when Bexton sent Mcdonald through but his effort from 20 yards out was poor and Dean was able to collect easily.

RCA’s injury woes continued with Moan limping off after 10 minutes to be replaced by Lilley. This prompted a re-shuffle of the defence with Lilley going to right back, Allen to left back and McNab moved to left midfield.

Whitley Bay took advantage of this and almost opened the scoring when McDonald nipped in to rob McNab of the ball and fire in a speculative shot which went just wide of the target.

On the quarter hour RCA were awarded a freekick which Davison took, his shot was blocked but fell to Leonard who crossed to the far post where O’Neill managed to get his head to the ball but it fell straight into the arms of Lister.

Whitley Bay continued to push forward and it was slightly against the run of play that RCA took the lead, Preston playing the ball out of defence to Elliott who sent a great through ball into the path of Leonard, he cut the ball back to Davison who managed to stab the ball between two defenders and into the net.

Within a minute the teams were level, McDonald picking the ball up midway inside the RCA half was allowed to dribble his way into the box before crossing into the six yard area giving Hird a simple tap in.

The visitors increased their lead five minutes later when a cross from Salmon found its way to Hird and the “Bay” striker made no mistake to steer the ball out of the reach of Dean.

It was all Whitley Bay at this point in time as they overran the RCA midfield and defence and it was no surprise when they increased their lead on the half hour mark with a move straight off the training pitch, a right wing corner taken by McDonald saw the ball dummied by Orrel and blasted home from 20 yards out by Spooner.

RCA tried to respond and a mazy run by Davison caused problems for the “Bay” defence and although the initial attack was cleared the ball was pumped back into the dager area by Allen and only a brave save from Lister prevented O’Neill from scoring.

The hosts were thrown a life line a minute later when they were awarded a freekick, Elliott took the kick and floated it into the box where Davison headed in a bullet of a header which left Lister stranded as it hit the net.

Whitley Bay started the second half well on top as RCA seemed devoid of ideas and were unable to cope with the forward rus of Robinson, Hird, McDonald and Salmon.

Ex RCA player Robinson was the next to try his luck with a shot which went wide of the target, however, he didn’t have to wait long to get his name on the score sheet, a poor pass from Elliott was intercepted by McDonald who spotted the run of Robinson and he slipped the ball past Dean, with the RCA defence nowhere to be seen.

Within five minutes it was 5 – 2 when the visitors were awarded a penalty for a foul on Robinson, Hird stepped up to smash the ball home and claim his second hat trick in a week.

RCA were totally demoralised and had no answer to the constant threat posed by a rampant Whitley Bay forwards who looked like they were back to their best. This was reminiscent of the attacking football of the treble Vase winning team.

Hird completed the scoring in the 67th minute when he raced onto a through ball, there was a possibility that he was offside, the linesman didn’t give it and the “Bay” striker took full advantage placing another shot out of the reach of a dejected Dean in the RCA goal.

Whitley Bay continued to attack and RCA can think themselves lucky that they didn’t concede even more in the latter stages of the contest.

Their only real attack came late in the game through Leonard on the right but the final ball into the box was volleyed wide by Davison.

O’Neill limped off late in the game with a knee injury and was replaced by Dorward.

A game notable for the vocal support of our Norwegian friends, a Hird four-timer and, was there also a streaker (not sure I saw that one certainly was not during the game).

This was a one that RCA will want to forget and move on.

However it has to be said that the visitors today looked two yards faster than our players, and tactically we never got to grips with the surging runs off the ball of the opposition. This was a really poor display from the RCA team.