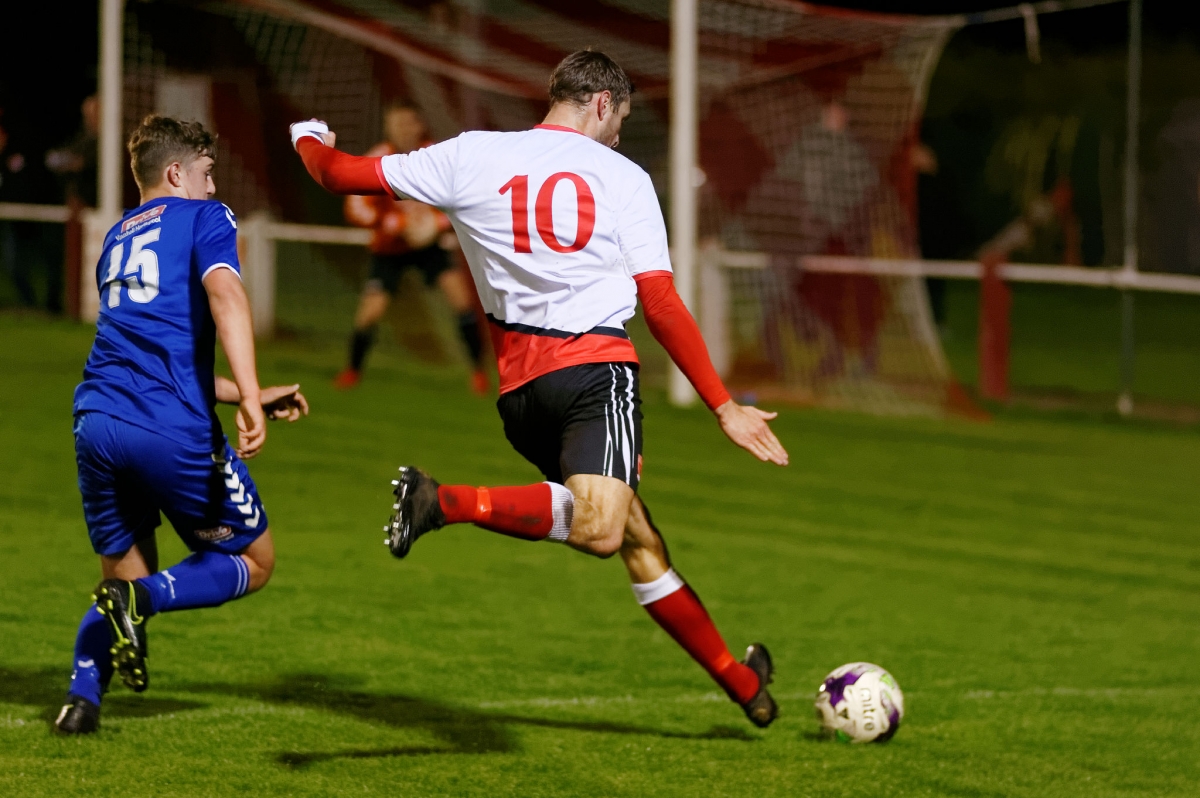 Double scorer Nathan O'Neill fires in a second half shot.

The RCA Management team made two changes to the side that drew at Seaham Red Star on Saturday, with Ross Preston, returning after a lengthy absence through injury, replacing Aaron Croft and Dominic Moan given his chance in midfield in place of Kyle Davis. They also changed the formation, starting with 3-5-2.

The game kicked off with RCA kicking toward the Cemetery end and it was they who had the first effort of the night when when McNab broke down the left side before blasting a shot over the bar.

After this initial burst from RCA it was Billingham Town who looked the better team as RCA struggled to find any rhythm in their play.

The visitors almost opened the scoring in the 5th minute when Summers picked out the run of Hogan who fired in a low shot which Dean did well to save diving to his right.

As the first half wore on RCA seemed to grow into the game as they got used to their new formation.

With 14 minutes gone, Swansbury played the ball out to McNab who was fouled, he picked himself up and swung in a cross to the far post where O’Neill’s header was deflected wide for a corner. McNab took the corner and this time it was Swansbury who connected with a header which went inches over the bar.

RCA took the lead in the 18th minute, Lilley played the ball to Allen on the right wing, his cross into the box was headed clear by Summers but fell to Elliott who squared the ball to O’Neill he struck the ball first time toward goal, unfortunately for Sharman the visitors goalkeeper the ball slip through his hands and into the net to give O’Neill his first goal of the season.

The visitors responded with a series of attacks which pushed RCA back on their heels. Bartliff crossed in from the left to Roddam but he sliced his effort wide.

Two minutes later and Wilson made a run down the right before crossing into the box for Hannah but Preston was able to block his effort and Swansbury cleared the danger.

On the half hour RCA started to push forward and a great run by Leonard caused problem for the Billingham defence as he dribbled his way past three defenders before crossing to O’Neill but his header was easily saved by Sharman.

A flowing move two minutes later saw Allen link up with Elliott on the edge of the visitor’s box before Elliott sent a deft cross into the path of Davison but the striker's effort was deflected onto the post and away for a corner. Davison got on the end of the corner but Sharman saved the header.

The home team continued to press forward looking to extend their lead and were unlucky when Allen whipped in a great cross which Davison caught on the volley but the shot flew wide of the target.

Just before the break Leonard latched onto a long ball from Swansbury, controlled the ball past his marker but was closed down quickly by Sharman who made a one handed save, ball bounced back to Leonard who shot again this time Sharman produced a fantastic save to deny the Sunderland loanee, this time the ball came out to Davison who burst into the box before falling to the ground under the close attention of Flounders and the ball went out for a goal kick.

RCA continued where they left off at the start of the second half as Allen went close with an effort following some good play between Elliott and Moan.

The game then seemed to stagnate for a period with neither team creating much in the way of goalmouth action.

However, on the hour mark McNab won the ball on the half way line, sprinted forward before playing a 20 yard pass into the path of Leonard, he slipped back inside before smashing a low shot which Sharman did well to save.

Two minutes later and a poor clearance was intercepted by O’Neill who played the ball forward to Leonard who again rasped in a shot which Sharman saved.

On the hour mark the visitors had the best chance of the half when Hogan picked up a long clearance, controlled the ball and cut inside his marker but from 10 yards out blazed his shot well over the bar.

It was only a matter of time before RCA scored as they piled on the pressure and in the 62nd minute McNab passed the ball to Elliott who struck a low grasscutter which seemed to squirm its way under the hands of Sharman and into the net.

RCA added a third in the 71st minute when Swansbury’s deep cross was headed back across goal by McNab and O’Neill was on hand to steer the ball past Sharman.

With 75 minutes gone Hannah had a great chance for the visitors picking up the ball from Mitchinson inside the RCA penalty area he looked to go round Dean but the RCA keeper manager to stretch out an arm and divert the danger.

Billingham’s cause was made all the more difficult when Hannah was shown a second yellow card for a late tackle.

With the game won RCA played out the remaining 10 minutes and deep into injury time were awarded a freekick which Davison took, curling the freekick onto the crossbar, the ball rebounded to Charlton who hammered it home from six yards out.

RCA go top of their group with this win having beaten both Crook and Billigham Town. They play Washington at New Ferens Park in the next group match on Wednesday, 16 October with a 7.45pm kick off.