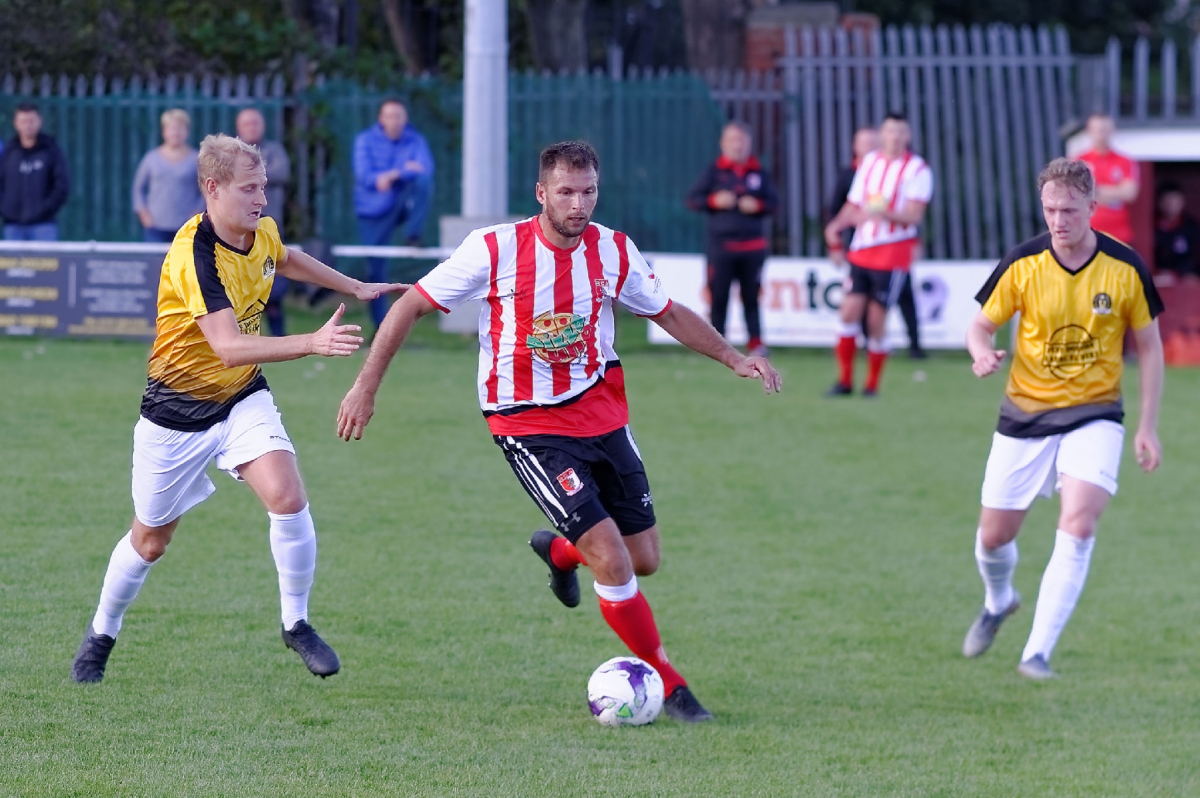 Mark Davison on the ball for RCA during the second half of the match.

The RCA Management team, once again, made changes to the team with the return of Allen and Davison replacing C Davis and Slack.

After the heavy rain of the last few days the pitch looked in remarkably good condition. RCA took advantage of the slope and the wind in the first half but it was the visitors who went on the attack from the start.

With only three minutes on the clock a flowing move by “West” , with no fewer than seven players involved saw the ball moved from the back to end up at the feet of Mitchell but he shot narrowly wide of the post.

Within minutes Dean was forced to make the first of many saves when a forward ball was chested down by Dowson into the path of Guy who fired in a low shot which Dean saved with his foot.

As the game settled it was clear that the passing and movement of the visitors had them well on top with the RCA players almost mesmerized at times by some quite stunning play.

Another flowing “West” move saw Mitten and Greenwood combining to set up Price who blazed his shot wide of the far post.

The visitors just kept coming forward and RCA were defending in numbers, Purewal was getting a lot of space on the left side and in the 20th minute had a great chance after being played in by Greenwood his effort however was not on target to the relief of the home team.

It was Purewal again five minutes later who picked up a perfectly weighted pass from Mitten before cutting inside and unleashing a shot which was well blocked by Lilley at the expense of a corner.

“West” kept up this bombardment on the RCA goal and only some desperate defending was keeping the scores level, the next attack came when Hegarty won the ball on the halfway line and quickly released it into the path of Mitchell who slipped the ball to Price but his shot was blocked by Swansbury.

RCA were yet to record a shot on target and were finding it difficult to get the ball out of their own half. So much so that both strikers, Callen and Davison, were being forced to help out in defence.

In the 30th minute “West” had a strong shout for a penalty turned down when Purewal fell to the ground under pressure from Croft and within a minute Purewal was set free on the left of the area , cuts inside before smashing a tremendous shot on goal which Dean managed to parry away for corner, from the corner Harwood got to the ball first to power in a header which beat Dean but was cleared off the line by RCA striker Davison.

Back came “West”, with a great move, Guy receiving the ball from the almost redundant Flynn, made progress down the right, played the ball inside to Dowson who laid the ball into the path of Purewal who drove a stinging shot at goal which Dean managed to save with his legs again.

The constant pressure eventually told on the RCA defence when in the 36th minute Dowson burst into the box again and Croft's challenge was deemed to be a foul by the referee who pointed to the spot. Dowson picked himself up and smashed the penalty into the net, “West” deservedly in front.

What happened next was an RCA transformation. With 40 minutes on the clock and scarcely able to string two passes together they suddenly produced some coherent passing, Elliott, for once in space played the ball forward to Callen who slipped two defenders before hitting RCA’s first shot of the game but Flynn was equal to it, parrying the shot away but only as far as Leonard who crossed to the far post and Callen played the ball to Croft who delivered a cross into the box which O’Neill headed over the bar.

RCA then had two further chances with O’Neill testing Flynn with a powerful shot before Elliott fired in a low shot which Harwood managed to block with his head.

For forty minutes RCA were under constant “West” pressure but still managed somehow to come in at half time all square.

Whatever was said at half time in the RCA dressingroom certainly had the desired effect as they came out looking a completely different team. They also changed formation to a 4-5-1 set up.

They were awarded a freekick on the edge of the box which was taken by Davison he floated the ball into the box where O’Neill forced a terrific save from Flynn.

Minutes later Dorward received a through ball from Leonard and his clipped, mishit, cross had Flynn scrambling as it landed on the roof of the net.

The tide was slowly turning in favour of RCA, their next attack saw Callen run at the “West” defence before winning a corner, Elliott took the kick driving it into the box where Swansbury got in a great header which was brilliantly saved by Flynn and cleared by Mitten.

West were now resorting to long range efforts which didn’t trouble Dean in the RCA goal, their only meaningful effort in the second half came in the 75th minute when substitute Dodds took a quick freekick and played in Bell who clipped the ball over the advancing Dean but the ball was cleared off the line.

RCA came back with Allen playing the ball to Callen who produced another good run on the left before crossing to the far post where Davison headed back across the face of goal but wide of the upright.

With the game drifting into the final 10 minutes Elliott won the ball on the half way line before playing the ball to Leonard but, with only the keeper to beat he took too long in his decision making allowing Flynn to close him down a smother the ball.

In the final throw of the dice RCA almost got a winner, Moan won the ball in the centre circle, was tackled by two "West" players but managed to squeeze the ball to Elliott who fired in a terrific shot from 30 yards out which Flynn did well to tip over the bar.

The proverbial game of two halves ended 1-1 which on reflection probably ended up a fair result. Come the end of the season RCA will look back at the last two games and say that they were two points gained against very good opposition.

Next up is a trip to Crook Town to play a League Cup Match. Kick off 7.30pm.