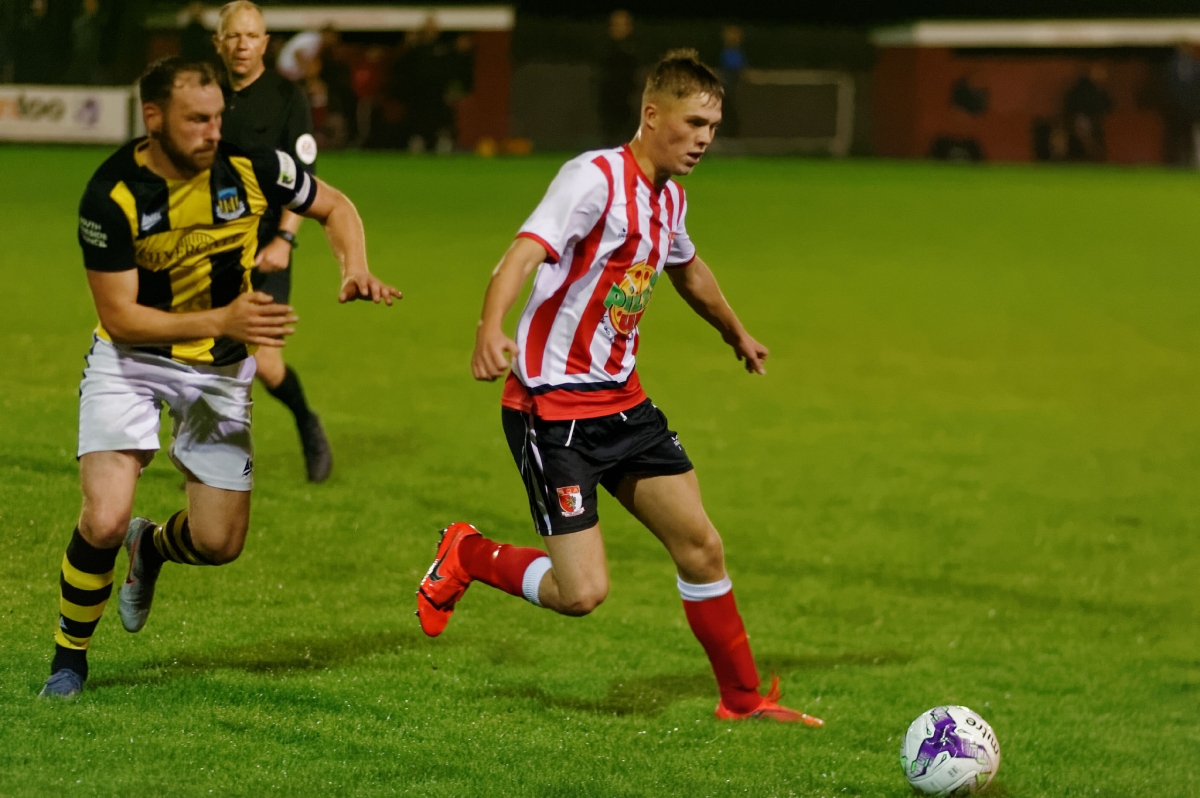 The return of four players boosted the squad ahead of tonight’s match against early League pacesetters Hebburn Town who, despite a setback on Saturday against an improving Thornaby side, sit proudly at the top of the table.

Swansbury and Callen returned to the starting eleven with O’Neill and Moan brought into the squad. Unfortunately, due to work commitments McNab was unavailable for selection.

The game kicked off on a calm balmy night at the “LGV Park” with RCA for once taking advantage of the slope in the first half.

However it was Hebburn who had the better of the early exchanges, a long ball into the box from Storey was headed clear by Swansbury but only as far as Richardson who fired in a low shot which flashed wide of the post,

RCA's first chance fell to Elliott who, seeing Jennison off his line, took a speculative shot from the half way line, which went wide of the target.

The home team took the lead with their next attack, a long crossfield ball from C Davis was well controlled by Leonard who floated a cross to the far post where C Davis had advanced to and he headed the ball to the edge of the penalty area where Callen swept the ball into the bottom corner of the net.

Hebburn reacted with a a spell of possession football which had RCA chasing shadows for a while but the visitors didn’t take advantage of their control of the match with only a long range effort from Sullivan, which went over the bar, to show for all their good build up play.

In the 17th minute a cross into the RCA penalty area by Sullivan was missed by everyone and landed at the feet of Robson but his shot was blocked by Lilley and cleared up field.

Two minutes later and a good break by RCA saw Callen carry the ball over the halfway line before playing in Leonard whose shot across the the face of goal and the ball went out for a corner.

The corner was cleared upfield to Armstrong who played it into the path of Sullivan and his first time effort was well saved by Dean.

A foul by C Davis resulted in a quickly taken freekick Sullivan playing the ball inside to Taylor who hit a low screamer wide of the upright.

Back came the home team, a throw out by Dean to Leonard sent the young winger free on the left, he cut the ball inside to Elliott who snatched at his shot and it flew wide.

The visitors took the game by the scruff of the neck with some more excellent passing play this time resulting in a succession of corners as RCA defended well against the onslaught.

On the half hour a slick move between L Storey and Armstrong sees the former play the ball forward to Robson but once again the Hebburn forward was guilty of missing the target.

An injury to C Davis forced the first substitution of the game with Gray coming on to replace him..

Hebburn continued to push forward through with Robson breaking into the RCA penalty area before having his shot deflected by A Storey for a corner, Richardson took the corner swinging it into the box to Spence but he was unable to get enough on his shot and Dean saved easily.

Almost immediately Gray caused problems in the Hebburn defence with a wicked cross from the left wing which just needed a touch by either Callen or Slack would surely have doubled RCA lead but the ball flew harmlessly wide of the far post.

In the final moments of the half Hebburn again attacked with a long ball forward from Jennison headed on by Armstrong into the path of Richardson but a great recovery challenge by A Storey blocked the striker's shot and Swansbury was on hand to clear the danger.

There was still time for two more changes for the visitors firstly, Taylor played a great ball into the box for Storey but his weak effort is collected by Dean and then in injury time Groves has a great chance inside the box but slashed the ball wide.

The second half heralded the start of the rain but this didn’t deter Hebburn in their pursuit an equaliser.

With the advantage of the slope they pressed forward through Robson who whipped in a lovely cross to Armstrong but the “Hornets” striker had strayed offside and the chance was gone.

RCA won a freekick on the edge of the box when Gray was fouled by Groves, Elliott played the ball to Callen who fired in a shot which Jennison saved comfortably.

At the other end Dean was called upon to make a save from a long range effort from Sullivan, Robson picked up the rebound and crossed to Armstrong but the RCA defence denied him the time and space and the ball was bundled wide.

A good move by Hebburn saw Robson weave his way through a number of tackles before firing straight at Dean but the Referee brought play back and awarded a freekick to Hebburn.

On the hour mark Hebburn eventually get the equaliser their play deserved, Taylor was again the instigator his cross into the box is deflected by Lilley into the path of Sullivan who made no mistake from close range.

RCA almost went straight back in front as Leonard picked up a long ball from A Storey, crossed the ball in to Gray who brought it down well before playing it to Slack but the striker hit his shot wide.

In the 75th minute Hebburn are awarded a freekick just outside the box, Taylor smashed the ball into the wall and the ball was cleared up the park to Slack who outpaced the Hebburn defence but with Leonard in a great position the RCA striker elected to shoot and his effort went wide of the target.

The game was opening up now and it was Hebburn’s turn to attack Dibb-Fuller picking up a pass from Lough fired in a dipping shot which Dean did well to get his body behind to make the save.

In the closing stages of the game, Hebburn were piling on the pressure and had shots from Armstrong, Robson and Dibb-Fuller all miss the target.

Deep into injury time the “Hornets” were awarded a corner which was swung in to the far post by Richardson and Armstrong rose to head home to give the visitors the lead with less than a minute of injury time to play.

RCA, from the kick off pushed men forward in a last throw of the dice and when Croft sent a long hopeful ball into the oppositions penalty area it was Captain Swansbury who got a touch which played it into the path of O’Neill who was fouled by Lough before he could shoot and the referee pointed to the spot. Elliott duly dispatched the resulting penalty kick into the back of the net to make it 2-2.

A quite unbelievable final two minutes.

RCA can count themselves lucky that Hebburn didn’t turn up with their shooting boots on tonight. There were some outstanding defensive displays from Swansbury, Storey and Lilley, ably supported by Dean, while Callen looked sharp for his 80 minutes and both Leonard and Slack contributed in attack when called upon.