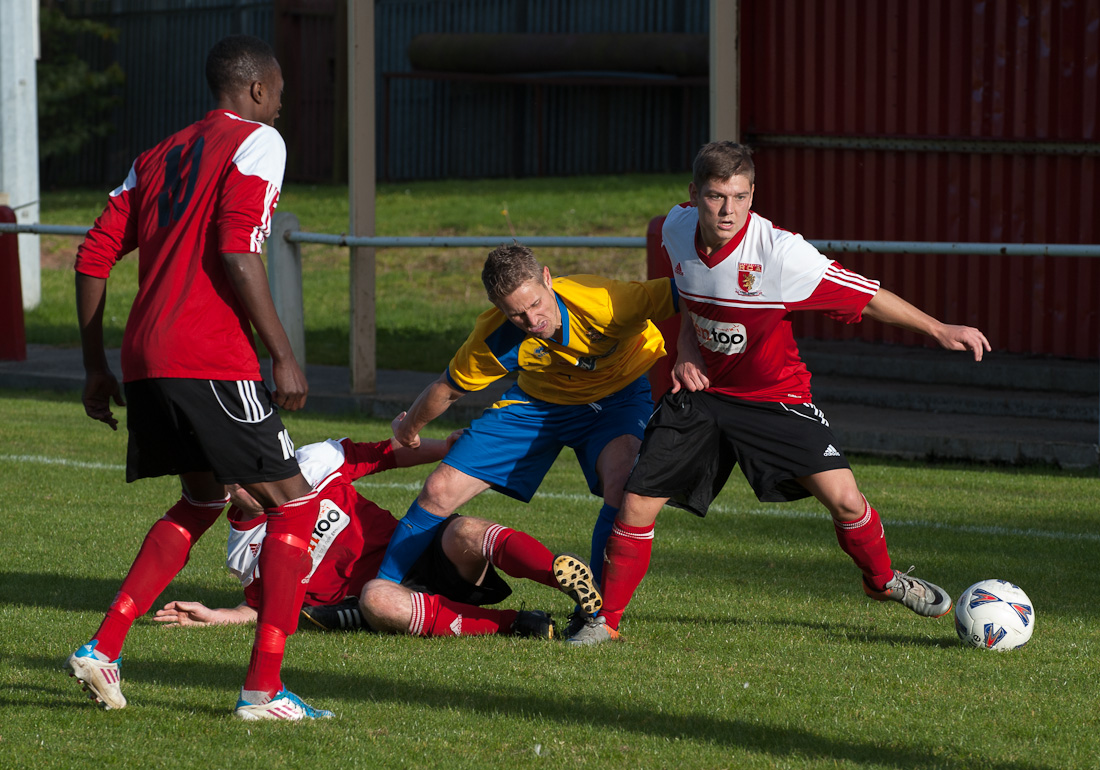 Good ground work from Andy Appleby sees the ball beak for new signing Nikolas Gibson in the second half of the match.

Another big step forward today as we entertained Marske United for the speedy return from our successful visit to Marske a few weeks ago. Our difficulties in fielding a side continued, with Assistant Manager Carl Beasley having to continue at centre back, while he was joined for this game by James Oates, moving over in the absence of Richard Paxton, with Steven Jones returning after his absence through injury to replace the unavailable Wayne Henderson. Veteran Buddy Halliday stepped into the breach in centre midfield in the enforced absence of skipper Brian Close who was working, with his first start for some considerable time.

The game started in a bright and competitive fashion, with Marske more than playing their part, with right back Collantine looking very dangerous going forward, and the evergreen David Onions leading the line as well as ever, and causing us some real problems. But Buddy was soon back in the groove and with Mark Hudson was working a few openings for youngsters Gibson and Davis out wide to feed off. Aris Guerin Lokonga and Gavin Barton looked sharp when the ball reached them, and it was Aris who gave us the lead with a beautiful flighted header from a corner half way through the half.

The game continued to swing from end to end, and Marske must have been disappointed when they went two down late in the half. But what a goal! A through ball bounced once in front of Gav Barton and he smashed it on the half volley from 25 yards out. The Marske keeper got his hand to it, but could not stop or deflect the ball enough against the power of the drive, a super finish. Marske may have felt hard done by to be behind at the break, but it got worse early in the second half when Gav Barton got his second and RCA's third with a solid strike from inside the box. It all looked good now, and for a while it seemed that way as we poduced some tidy football in midfield, with good running from the wide men and Aris looking dangerous. But Marske had other ideas and began to test the RCA back line with good long balls and set pieces.
Two good headers, from Onions and Carling, although Onions was trying to claim that one as well as he followed it in, saw them right back in the game with plenty of time to draw level. The game became frantic, with Marske pressing hard and RCA looking dangerous on the break. Some hairy defending just about kept the RCA goal intact, while at the other end Aris hit the post and Jamie Davis put a free header wide. There was no doubt which side was happy to hear the final whistle, but tough as it turned out to be it is another three points in the bag, five wins on the belt, and amazingly, up to third in the league. Lets keep it going...
‹ Shildon AFC 2 Sunderland RCA FC 3 up October ›