RCA travelled to Consett with a depleted side missing no fewer than eight regular first team players, Swansbury, O’Neill, Davison and Moan are at a wedding abroad, Callen is on his honeymoon, Hodgson and Preston are both injured and Allen was poorly, so it was a very youthful and fairly inexperienced looking team that took to the pitch against a resurgent Consett team looking to win promotion.

The RCA management team was left with little choice in their selection of the team with only 14 players available to play. 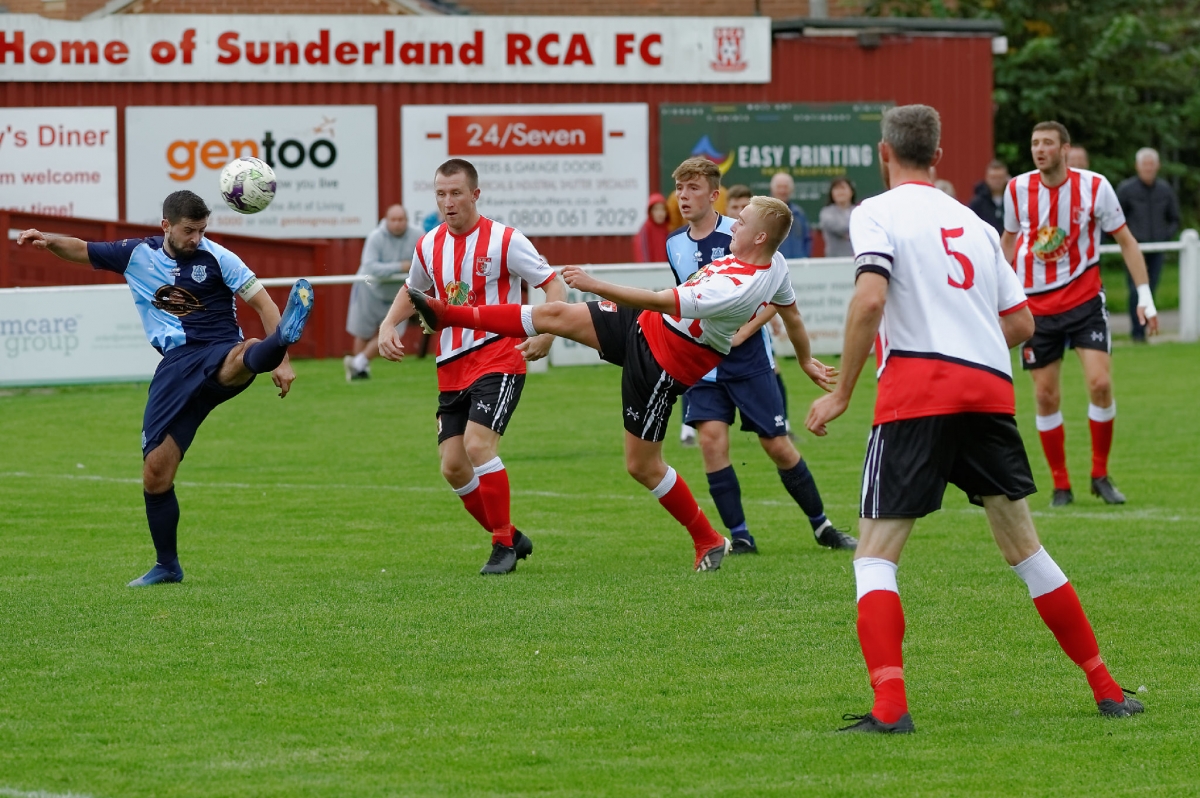 Dylan Elliott fires in a shot late in the match.

Bishop Auckland were the visitors to LGV Park, for this EBAC Northern League fixture and after Wednesday’s drubbing at the hands of Dunston the management team were looking for a positive reaction from the the players.

Injuries continued to be a major cause for concern in team selection but with two new signings to boost the squad there was some light at the end of the tunnel.

Josh Gray and Alex Storey were both selected to make their debuts in the following line up: 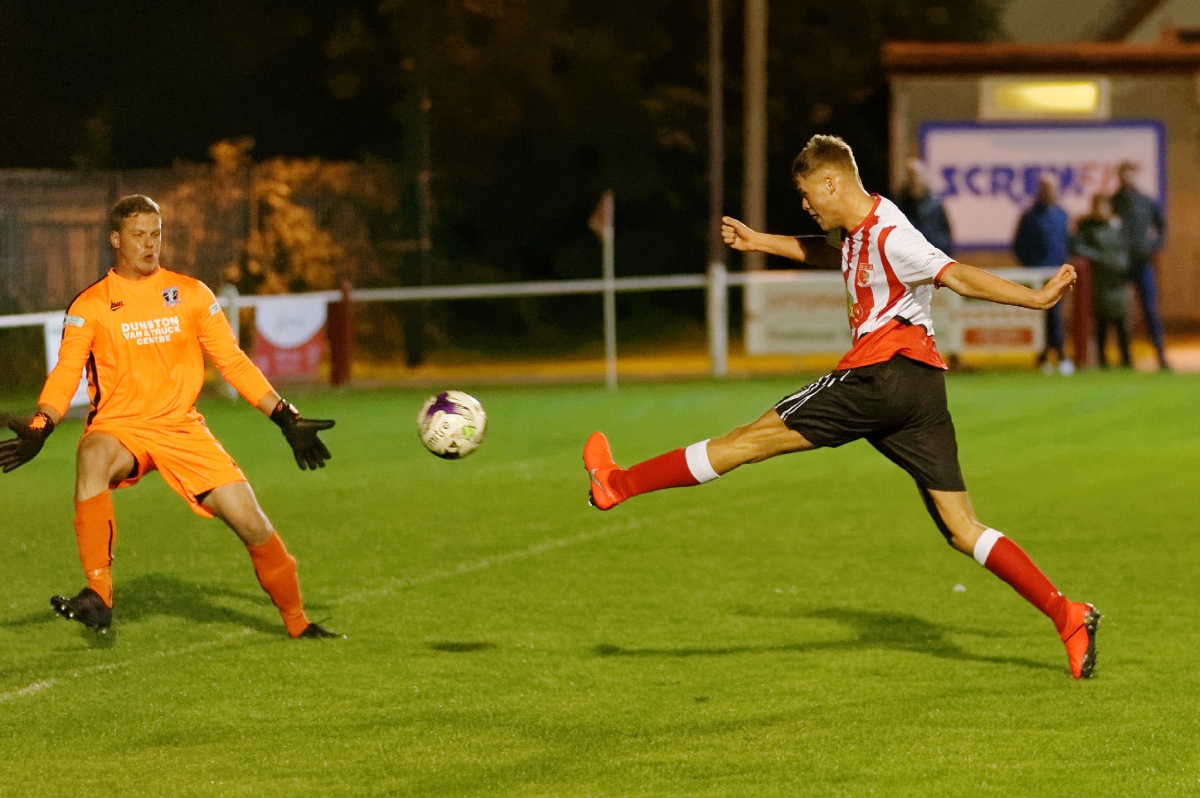 Connor Slack looks for a consolation goal late in the match.

RCA entertained Dunston in The FA Cup 1st Qualifying Round Replay at The “LGV Stadium”. After Saturday’s 0-0 draw the tie had to be settled tonight.

Problems in team selection for RCA focused mainly on the two winger’s, Callen was off on his honeymoon while Leonard picked up a knock on Saturday and was unavailable. Into the team came Clayton Davis and Michael Charlton.

The FA Cup 1st Qualifying Round and it’s a trip to Dunston’s UTS Stadium for the loyal RCA supporters.

Another ground that has seen a massive transformation during the close season with the addition of new perimeter fencing and dug outs. The pitch itself also looked in good condition.

As always we received a warm welcome from our hosts at Dunston and with a near 400 crowd the scene was set for a good game of football.

After naming the team RCA were struck by what is now being called the No:4 Jinx, Ross Preston originally down as No: 4 on the teamsheet pulled up in the warm up and was replaced by Sam Lilley he also pulled up with a recurrence of an old injury and he was replace by Dominic Moan, third selection change in 20 minutes all revolving around the No 4 shirt.

A trip down the A19 to “Teesdale Park”  for the RCA faithful to play Thornaby who are currently bottom of the League but who enjoyed a fantastic 4 – 0 win at Eccleshill United on Saturday in the FA Vase.

A pleasantly uneventful trip with none of the usual holdup associated with the A19.

What was also pleasantly surprising was the amount of changes that have been made to Teesdale Park since our last visit. The club should be rightly proud of what they have achieved in a relatively short period of time. A massive well done from all at RCA.

Back to team news for the match, defensive problems continue to blight our team selections with Lilley ruled out after a fitness test, Preston, C Davis and Hodgson remain on the injury list so it was a makeshift back four of Allen, Swansbury, McNab and Moan that were to take to the pitch.

A lovely balmy evening greeted the players and the pitch looked in good condition. 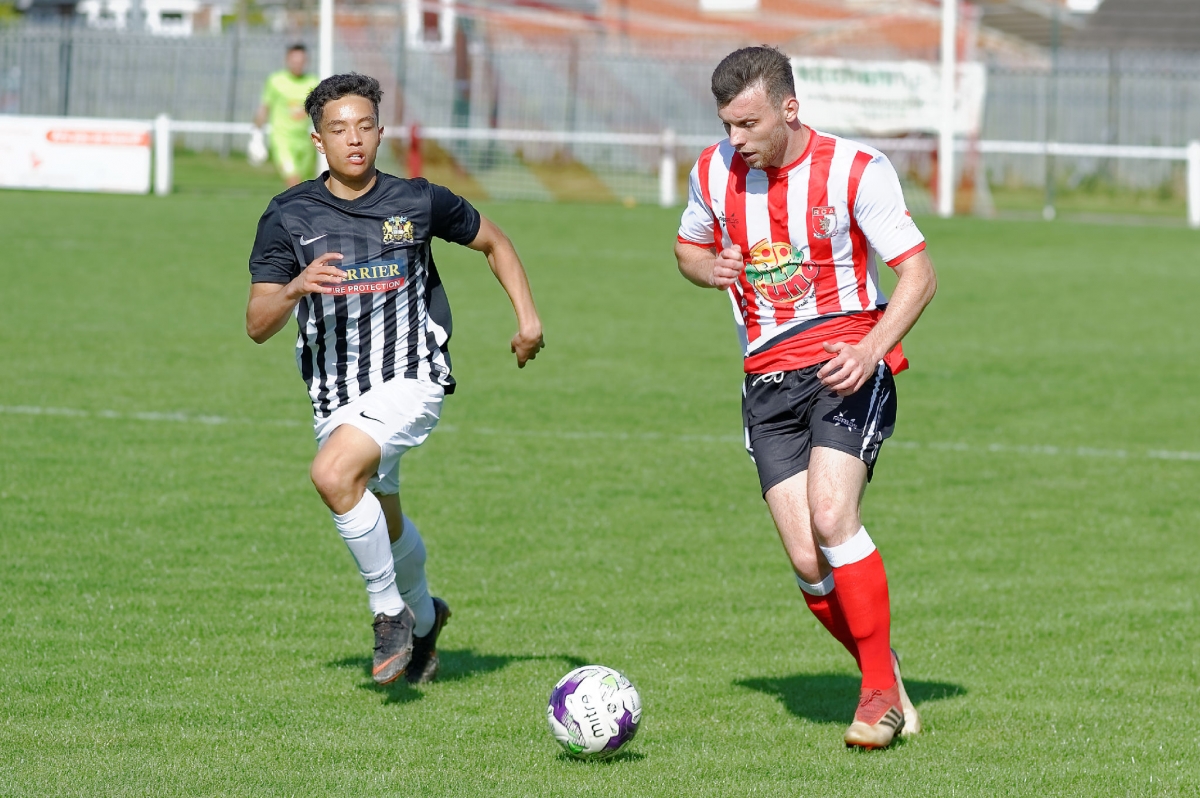 Ross McNab on the attack during the first half of the match.

Newcastle Benfield were the visitors to “LGV Park” for this EBAC Northern League match. Both teams have had similar starts to the season having lost only one match and both progressing in the FA cup so a tight competitive match was expected.

The RCA management team had to make a late change when Ross Preston pulled up in the warm up and had to be replaced by Sam Lilley. Sam’s place on the bench was taken by Connor Slack who is on Work Experience from Sunderland AFC. 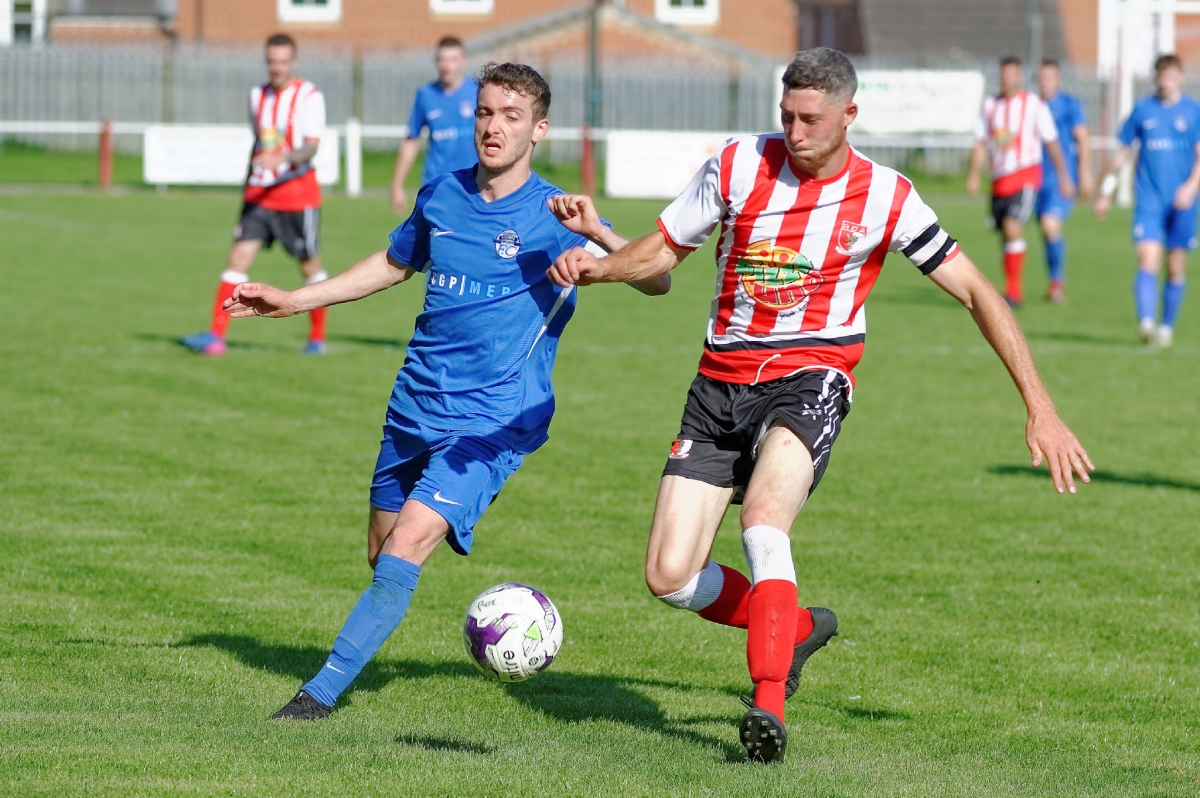 For more photos from the match please click here

It doesn’t seem like five minutes since Stephen Callen’s last minute winner against Ryhope CW sent RCA into the Preliminary round of the FA Cup to meet West Yorkshire side Hemsworth Miners Welfare. Since then Stephen has been married to the lovely Gemma and we wish them all the best for the future. Hemsworth have started the season in much the same vein as RCA with only one defeat so far in the league and no doubt looking to avenge the 5-1 defeat inflict on them by RCA in the FA Vase in 2015 courtesy of a Larkin hattrick.

The RCA management team gave late fitness tests to both Preston and Lilley and both were passed fit to play although Lilley as a precaution had his head bandaged and was placed on the bench. Ross McNab returned to replace Lewis Green who did well in his first start against Northallerton in mid week and Stephen Callen replaced the injured Craig Hodgson.

An overcast evening in Northallerton with a few showers knocking about for tonight's game, everyone hoping they hold off, and a decent crowd in, including a good few from Sunderland.

RCA gave a starting debut to Ryan Leonard after his impressive cameo on Saturday, one of a number of changes forced on RCA. Steve Callen, Ross McNab and Clayton Davis were missing through injury from Saturday’s team, with Ross Preston also still sidelined. With Lewis Green and Dom Moan also coming into the starting line up it was a very young looking RCA team that started the match.

Ref Leo Howard got the game underway, after an immaculately observed minute’s silence for Andy Curtis who served Northallerton for many years and will be sadly missed,. The game began in an open manner and at a quick pace with RCA attacking immediately and forcing a corner. Northallerton looked lively and pressed hard, O'Neill would have scored, but for a marginal offside, and a good save by Dean saved RCA after Dom Moan was robbed. Northallerton forced a couple of corners in the first ten minutes but found captain Swansbury in fine form and marshalling his young defensive partners well, while Robbie Dean started, as he went on all night, with top class handling and anticipation.

RCA’s management team were forced to make one change to the team who played in the mid-week FA Cup win over Ryhope CW with Sam Lilley coming in for the injured Ross Preston. They also had new on-loan signing Ryan Leonard on the bench. 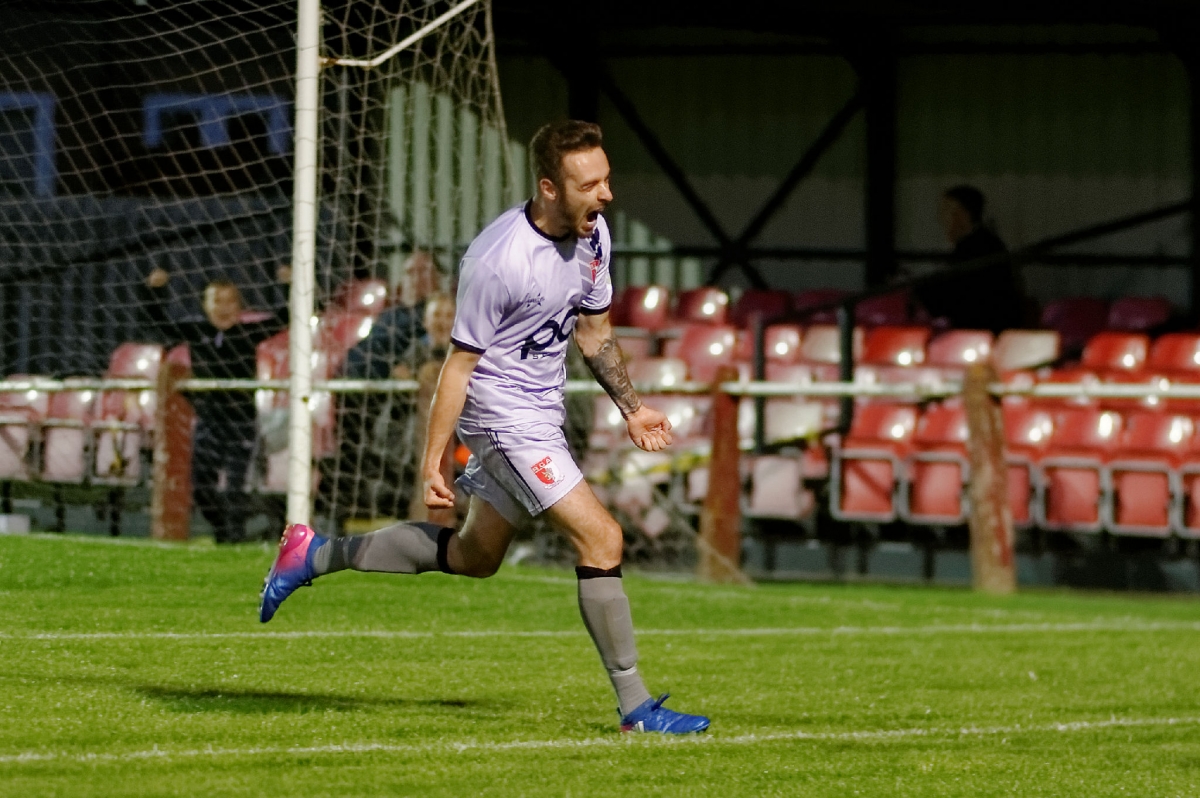