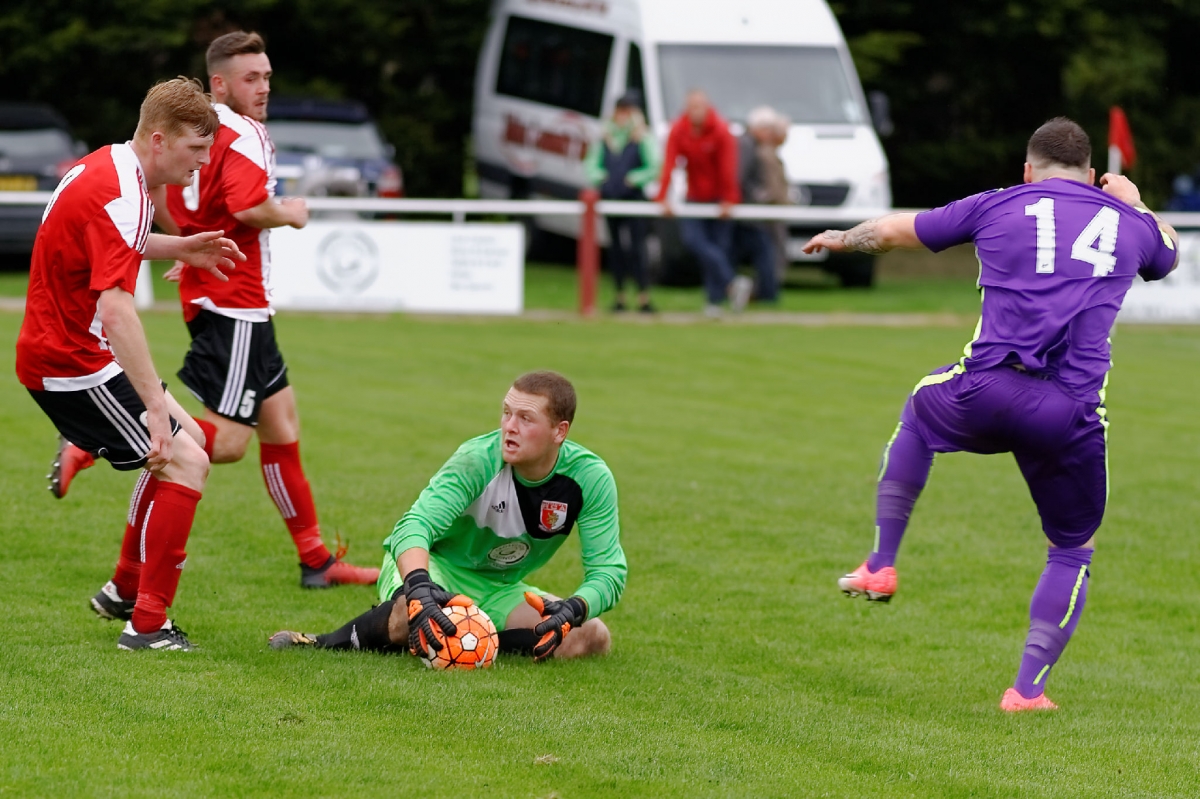 Neal Bussey made a string of super second half saves.

Following Wednesday's 3-0 defeat to Shildon at Dean Street, Sunderland RCA were back in Northern League action today with the return fixture against Shildon at Meadow Park.

RCA were down to the bare bones for today's match, with Colin Larkin and Stephen Callen joining the injured list from the match on Wednesday, and Ross Preston away. Into the side came Clayton Davis and Jak Ashton, and Luke Richardson started after playing almost all of Wednesday's match.

Shildon had the first opportunity of the match in the third minute - a corner was half cleared and Hodgson fired in a fierce shot from 25 yards just wide of the post. Ten minutes later and RCA won a free-kick for a foul on Cassidy. Elliott's free-kick was cleared. Two minutes later and Shildon won a free-kick for a foul on Coleman which was also cleared as the match got off to a low-key start. Midway through the first half and Peacock delivered a good cross from the right which was well held by Bussey at full stretch and under pressure from Coleman. Three minutes later and RCA had their first real chance of the match - Davis made a good interception to regain possession for RCA, before playing in Page who advanced to the edge of the penalty area but his shot was poked wide of the post.

The 26th minute brought the half's major, or perhaps, only, talking point - Coleman chased a through ball and was fouled by McGuinness on the edge of the penalty area. The referee chose to show only a yellow card, despite vociferous protests that it should have been a red. Perhaps the only thing that kept McGuinness on the pitch was that Coleman was running on an angle towards the corner flag - but, nevertheless, you do see them given as straight reds! From the free-kick, Peacock rattled the top, left corner of the woodwork with a tremendous, curling effort. In the 32nd minute, RCA produced a super move, switching play from right to left and Elliott firing a shot over the crossbar. Two minutes later and Shildon were awarded a free-kick for a foul on Coleman, which Robson fired over the crossbar from the apex of the penalty area. And two minutes further on, Peacock crossed and Fenton sent a flying header just wide. In the 38th minute, Greulich-Smith made a good run down the left and crossed - McGuinness sliced an attempted clearance over the crossbar for a corner which was too high and went out for a throw-in on the far side. As half-time time approached Davis made a good run down the right, winning a corner which was cleared.

Again, it was the visitors who had the first scoring attempt in the second half - in the 50th minute, Coleman received the ball from a throw-in on the right, before turning and firing in a shot just wide from the edge of the penalty area. One minute later and O'Neill raced onto a through ball, his shot from ten yards, which was heading for the top corner, was palmed over the crossbar by Liversedge. In the 56th minute RCA were reduced to ten men - Coleman made a driving run down the right, cutting into the penalty area and was impeded by McGuinness, who was given a second yellow card. Three minutes later and Shildon took the lead as Fenton received the ball on the edge of the penalty area and fired in a powerful, low shot into the bottom corner. RCA won a free-kick in the 63rd minute after Noble was fouled. The ball was cleared and Fenton was in on goal but Bussey made a terrific block to keep RCA in the match.

In the 76th minute, RCA had a good chance to equalise as Cassidy drove into the penalty area but his goal bound shot was blocked for a corner which was cleared. Five minutes later and Coleman fired in another ferocious effort from the right corner of the penalty area that was superbly blocked by Bussey with his feet for corner which was cleared. And three minutes later Bussey was again called into action after substitute Burnicle was put through but the RCA ‘keeper raced out and made another excellent block. In stoppage time Coleman again fired in a shot from the right side of the penalty area that crashed off the post as Shildon finished the match strongly.

Yes, another defeat, but the lads deserve great credit for keeping the scoreline to a single goal with both eleven and ten men. As the mysterious Ghostly Gadgie has pointed out from his excellent position in the cemetery, playing the same team twice in three days, with seven months of the season remaining, does seem rather unnecessary. However, on the plus side, at least we've got the two games out of the way - two games we've now lost for each of the last five seasons.

Not wishing to make excuses, but RCA's run of matches so far this season - with no midweek break - has seriously tested a squad that has suffered injuries to key players - highlighted today by having to play goalkeeper Jack Patton as an outfield player after Jak Ashton was injured in the second half. RCA were today without James Armstrong, John Butler, Stephen Callen, Jonathan Davis, Jake Fowler, Craig Hodgson, Colin Larkin, Ross McNab, Ross Preston and Greg Swansbury.

This afternoon's RCA man of the match was chosen by Carl Fox. Carl picked Luke Page who “put in a great shift both in midfield and at the back.” Well played, Luke!

Next up for RCA is another tough Northern League match as Morpeth Town are the visitors to Meadow Park on Tuesday, 26 September, kick-off 7:30pm. Hopefully we'll have enough players available to field a team!