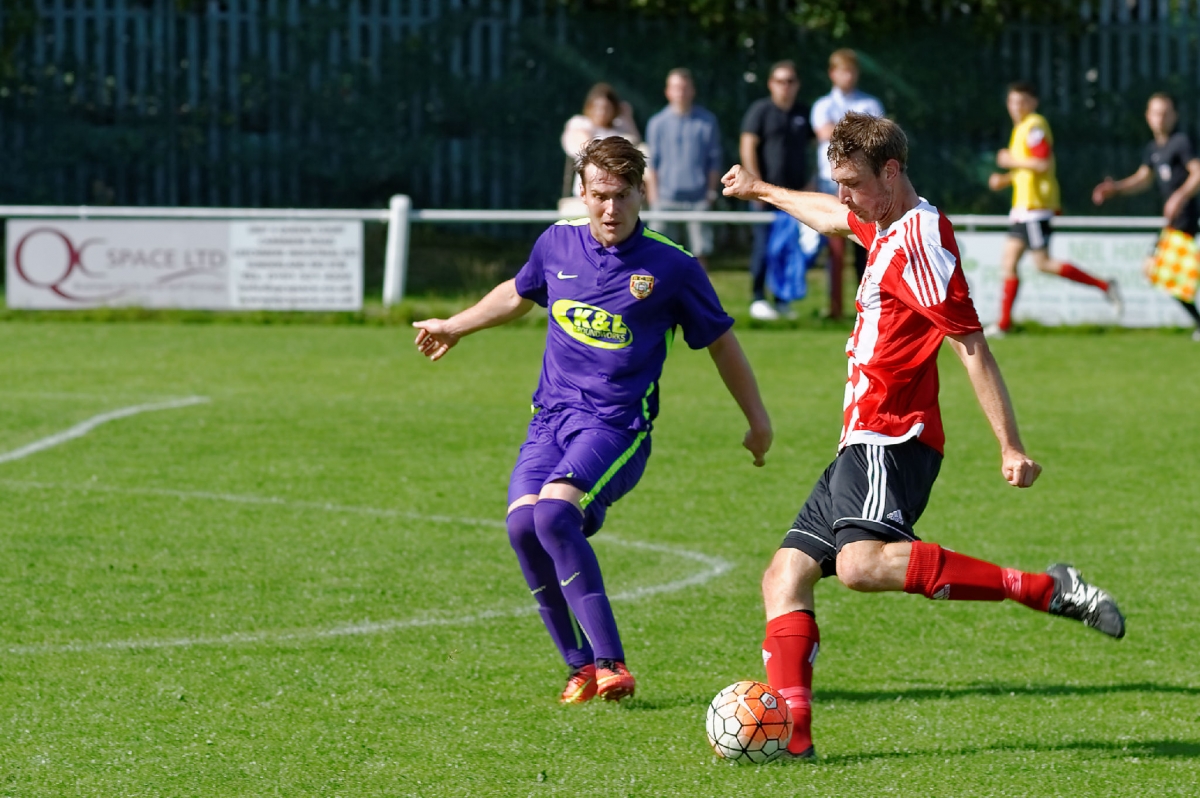 Nathan O'Neill - who scored for RCA against his former club - fires in a shot.

A Ryhope derby between two sides in great form - after losing their opening match of the season by a single goal in the Emirates FA Cup at Ashington, Ryhope Colliery Welfare have been in superb form in the Northern League winning all three of their matches so far against North Shields, Stockton Town and Billingham Synthonia.

RCA have bounced back strongly from the defeat at Marske United with a terrific win against Ashington in the FA Cup last Saturday and a good Northern League victory over newly-promoted Team Northumbria on Tuesday night.

RCA made one change to the side that beat Team Northumbria on Tuesday - Clayton Davis returned to right full back, replacing Luke Richardson.

RCA got the match off to a perfect start, opening the scoring with only three minutes on the clock - Swansbury made a good run down the left before playing in Charlton. Charlton then did exceptionally well to turn and fire in a shot that was parried by Ball and O'Neill, once again in the right place at the right time, smashed the ball into the net with a super finish from 12 yards against his old club. RCW had their first opportunity of the match two minutes later - a corner was well cleared by Hodgson and Melvin fired the ball back towards goal but his effort was blocked by McGuinness. In the 18th minute RCW equalised. Weirs played a ball forward and, as Page and Bussey seemed uncertain who should take charge, Melvin nipped in and the former RCA striker dinked the ball over Bussey at the edge of the penalty area and into the empty net.

In the 28th minute Charlton released Callen down the right and Callen drove to the byline before sending a low cross right across the face of goal. Two minutes later and Elliott, in central midfield, released O'Neill whose shot from 20 yards was comfortable for Ball. One minute later and Page made a terrific run through central midfield before being fouled by Paxton. From the free-kick, Callen was caught offside. Two minutes before half-time Callen made another good run to the byline but his cross was cleared for a harmless corner.

Honours even in an uninspiring first half, with RCA uncharacteristically out of sorts despite taking an early lead.

The second half took a while to get going with neither side mounting any serious threats on goal. But in the 61st minute RCA retook the lead with another cracking goal - Callen played the ball to Elliott with a lovely lay-off and Elliott, for the second time this week, smashed in a beauty from the edge of the penalty area. Three minutes later and Callen made a great run through midfield before playing the ball to Charlton, who flicked the ball onto Davis whose shot was well saved by Ball. On the 71st minute Callen made a super driving run through central midfield before firing his shot wide.

It was all RCA at this point, and midway through the second half RCA produced a lovely move as Callen again made a driving run down the left before crossing to O'Neill at the edge of the penalty area, whose first-time shot crashed off the post. From the rebound, Cassidy followed up and his shot was brilliantly blocked for a corner which was cleared. With ten minutes remaining, RCA sealed the match - Cassidy made a driving run down the left before unselfishly squaring the ball to Page who finished well from inside the penalty area.

Five minutes later and RCA had a fourth. A cross from the left was delivered into the penalty area and Hodgson went to ground under a challenge and the referee pointed to the spot. Elliott found the corner of the net, despite Ball diving the right way. Your correspondent thinks that Dylan has made an outstanding start at RCA - strong in the tackle, a lovely weight of pass, and five goals already from midfield. Great stuff! Amazingly, two minutes later and RCA were awarded a second penalty - Cassidy made his umpteenth driving run down the left before cutting into the penalty area where he was upended by Ball. No complaints again from the visiting players. Elliott stepped up again and went for the same corner, but so too did Ball to produce an excellent save to deny Elliott a hat-trick.

What a week it has been at Meadow Park! Three wins, 11 goals scored and just two conceded. Some superb football played and plenty of cracking goals - resulting in a nomination for the Northern League's team of the week competition (although the win against Ashington last Saturday will, of course, have counted for the previous week). Martin and his backroom team look to be building a dynamic, young team this season, playing some great passing football.

This afternoon's RCA man of the match was chosen by John ‘Scon’ Anderson. Scon picked Luke Page for his “box-to-box running, breaking up play in midfield, excellent defensive tackles, and to top it off, he scored a good goal too “. Well played, Luke!

Next up, RCA head to Consett on Bank Holiday Monday. Please note: kick-off is at 1.00pm. See you there.