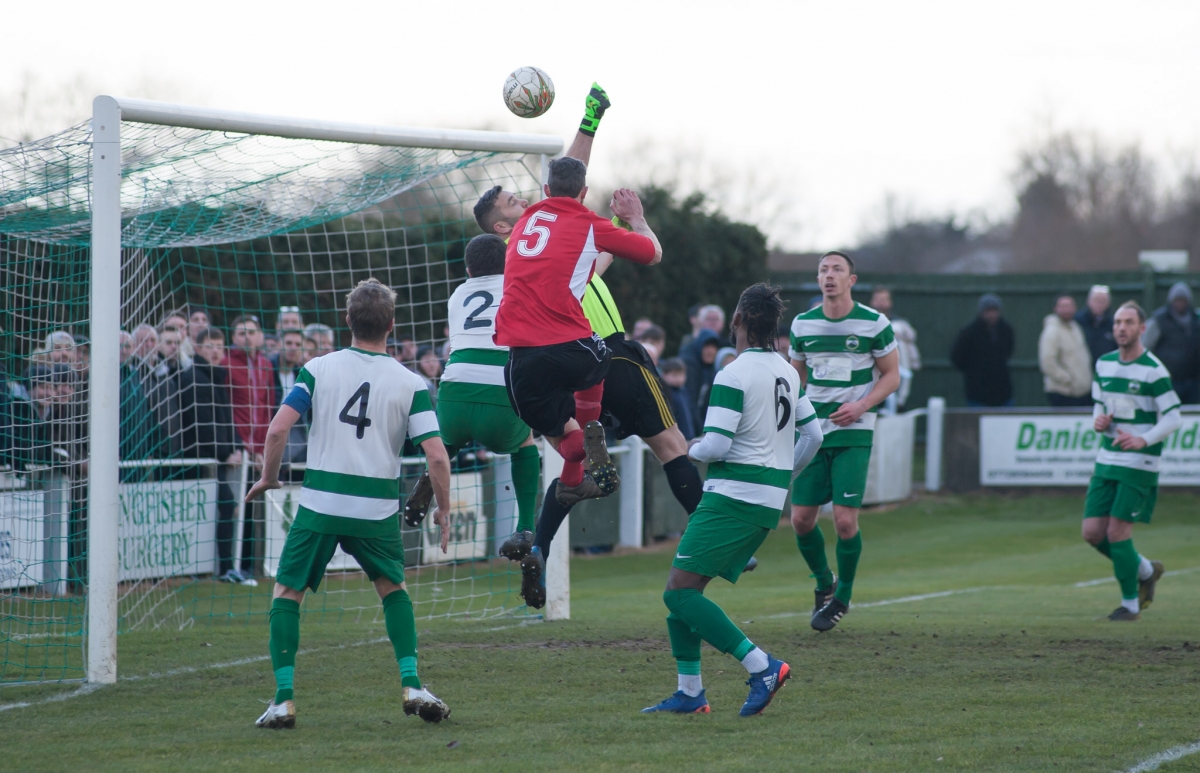 Swanna and The Swans: RCA captain Greg Swansbury attacks a first half corner.

Sunderland RCA made the long journey to Buckinghamshire and to Newport Pagnell Town for today’s Fifth Round tie in the FA Vase. For Newport Pagnell this was a first ever Fifth Round match, and for RCA, a second after also reaching the Fifth Round last season. For the winners a place in the Quarter Final for the first time and the thrill of knowing that Wembley would be just two rounds, and three matches, away.

Both sides had progressed to this stage of the Vase with some impressive results in previous rounds and - with similar league records this season - it looked like a close game was in prospect.

RCA’s terrific run of seven wins in a row came to an end last Saturday with a home defeat to Shildon, while Newport Pagnell were also losing away to Yaxley in a less than ideal preparation to the big game.

With Ross Preston and Adam McGuinness again cup-tied, Luke Richardson was switched to left back with Clayton Davis returning at right back. Reece Noble started in central midfield for the first time since returning from Washington, with Craig Hodgson moving from midfield to central defence.

The match got underway in front of a big crowd and it was the home side that had the first chance - a free-kick on the halfway line was headed on towards his own goal by Noble but was comfortably held by Carmichael. After five minutes RCA had their first attack as Callen made a run down the left but the cross was cleared. Two minutes later a free-kick from C Davis was headed towards goal by Callen and then cleared. Newport then went on the attack as Lawless made a run down the left and cut into the penalty area but the cross was too long. Back came RCA as C Davis made a run down the right before cutting the ball back to Larkin, whose cross was half cleared to Callen who chested down and volleyed the ball just wide.

In the 11th minute RCA won a free-kick on the edge of the penalty area. The kick was driven in by Larkin and blocked - Larkin then crossed but the ball was punched away by Osborn. Three minutes later and RCA won another free-kick down the left after Callen was fouled. Noble’s free-kick was cleared for a corner which was headed wide by Richardson. Newport went back on the attack as Lawless beat Richardson down the right and shot under Carmichael but wide. One minute later and Butler was booked for a clumsy challenge on the halfway line. The free-kick was cleared by Hodgson.

Midway through the first half and RCA took the lead. A long ball into the Newport penalty area was half cleared to Butler, who played in Cassidy down the right. His cross was dummied by Callen leaving Larkin to slot the ball home for a well-worked goal. Two minutes later and RCA almost doubled their lead as Charlton was put through on goal but Osborn rushed from his goal to block for a corner which was cleared. RCA kept up the pressure on the home side without having any clear attempts on goal. In the 33rd, the dangerous Lawless made a run down the left but his cross was blocked by Hodgson. Three minutes later and a run down the right from C Davis resulted in a cross which was blocked for a corner. The corner from Noble dropped to Swansbury whose shot was wide.

With six minutes until half-time RCA doubled their lead. A throw-in from Richardson down the left was controlled by Callen with one touch, before turning towards goal, taking a further touch and then slotting the ball into the far corner for a terrific strike. One minute later and some good work down the right by Cassidy forced another corner for RCA. Noble’s corner fell to Swansbury who shot high over the crossbar. As half-time approached a goal kick from Carmichael went straight through to Charlton whose attempted lob went over the crossbar. Seconds later and Newport had a great chance to get back into the match as an attack down the right and cross to Lawless whose shot was just over the crossbar. And less than a minute later Lawless again made a run down the left and a shot from Ling was just wide as Newport finished the half strongly.

Immediately after the restart RCA had a great chance to all but wrap up the match. Hodgson played in Cassidy who made a lovely run down the right and picked out Butler with a precise cross. Butler controlled the ball but his shot was saved by Osborn. Five minutes later and RCA had another glorious chance as Larkin broke free and was in on goal before squaring the ball to Butler whose shot was again saved by Osborn. And Butler had a further opportunity two minutes later with a shot from 12 yards which went wide of the post. On the hour mark C Davis was replaced by Robinson and two minutes later Larkin was replaced by J Davis.

In the 70th minute Newport got back into the match as a free-kick bobbled around in the RCA penalty area before Smith latched onto the loose ball to power a shot past Carmichael. It was game on now and Newport piled on the pressure in search of an equaliser. Three minutes later and a foul by Charlton on Smith lead to a free-kick which was just over the crossbar. A minute later and Newport had the ball in the net but the flag was up for offside. As the match entered the final 15 minutes, Newport created numerous opportunities as a cross to the far post just eluded two players and then a shot from the edge of the penalty area was brilliantly blocked by Hodgson - flinging himself at the ball. With five minutes remaining Lawless controlled a bouncing ball and shot straight at Carmichael. With the match now in the sixth minute of stoppage time Newport won a throw in down the left. From the throw the ball was crossed into Pryke, whose deft header at the front post sent the match into extra-time and deny RCA a famous win. Ecstasy for Newport - agony for RCA.

It was self-evident that the match had swung Newport’s way by the body language in the two huddles prior to extra-time commencing. Newport were on a high, geeing each other up with shouts of “come on, we can win this now”. RCA, meanwhile, were standing, hands on hips, heads bowed, understandably, after being less than 30 seconds away from winning the tie.

It was RCA who got the first opportunity as a corner was cleared to Robinson who shot wide. Two minutes later and Lawless - who had been superb for Newport throughout the match - surged down the middle before shooting at Carmichael, who got back to his feet to punch the ball clear. RCA won a free-kick three minutes later after a foul on Cassidy. The free-kick by J Davis was saved comfortably by Osborn.

In the 98th minute Newport took the lead for the first time as that man Lawless took on Hodgson and Swansbury before sprinting into the penalty area and calmly slotting the ball past Carmichael. In the second half of extra-time RCA’s best chance to equalise came as Charlton was fouled on the edge of the penalty area. The free-kick from J Davis went just over the crossbar. The final minutes of the match were used up with Newport sensibly running the ball down the channels and into corners as they ran the clock down to complete the comeback.

A match that got away - RCA had more than enough chances in the opening 55 minutes to have put the game well and truly beyond Newport and it proved costly. Newport, for their part, played very well in the final 30 minutes of the match and took their chances. A second successive Fifth Round defeat for RCA by the same scoreline after extra-time - lightning cruelly striking twice.

RCA now need to put this defeat behind them and try to finish the league campaign strongly and really go for it in the League Cup Quarter Final.

Next up is a Northern League match away at Ashington on Saturday.