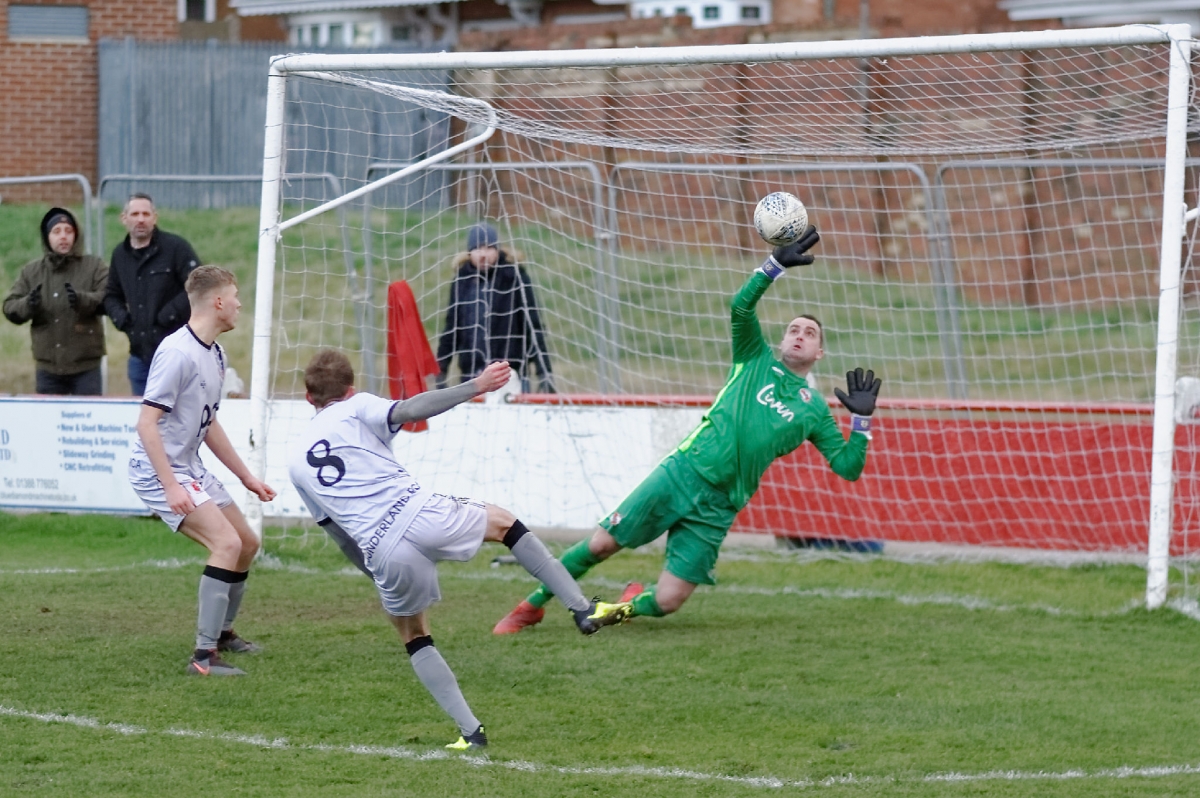 Shaun Newbrook denies Carl Lawson an equalising goal with a terrific save.

RCA’s injury crisis eased a little with the return of Hodgson and Croft to the starting eleven but with Davison failing a late fitness test it seemed to be back to square one. New signing Jack Leonard took his place on the bench.

With both Elliott and O’Neill unavailable for personal reasons it meant further changes to the team that played so well in defeat on Tuesday at West Auckland. Four changes were made to the starting eleven with the injured Davison making himself available on the bench if required.

A very windy Dean Street greeted the two teams for this match and Shildon decided to take advantage of the wind in the first half.

Shildon were quickly into their stride playing the ball across the pitch which looked heavy in places. An early chance fell to Craggs when Palmer whipped in a cross from the left and although Craggs got a good head to the ball it flew wide of the upright.

If RCA were to get anything out of this game they would need to take advantage of any chances that presented themselves and in the 6th minute one such chance came when Dean sent a long ball forward and Slack outmaneuvered the Shildon defence to break into the box but skewed his shot wide of the far post.

The game settled down a little as Shildon took control but their passing game was meeting strong resistance from a resolute RCA team who were denying them space to create many chances.

Indeed their next effort on goal came in the 20th minute when they were awarded a freekick on the edge of the box, Craggs struck a sublime effort toward the bottom corner and Dean had to be at his best to turn the ball round the post for a corner.

Shildon took heart from this effort and a good move down the left involving Liddle and Craggs ended with the ball being squared to Moore who fired in a low shot which Dean saved comfortably.

However the relief was shot lived as Shildon ramped up the pressure and a minute later a Robson cross into the box was headed over the bar by Trotter and from the goal kick the ball was picked up by Moore who played it forward to Heywood whose first time shot was blocked by Croft.

An injury to Moan meant the introduction of Jack Leonard to make his debut for the club a day after his 18th birthday.

In a rare lapse of concentration by Shildon they gave away possession inside their own half and Slack pounced on the opportunity, drifting past his marker but his goal bound effort struck Vaulks and was plucked out of the air by a relieved Newbrook.

Within two minutes RCA were again under pressure from a freekick, this time Craggs rifled in a cross which was met by Thexton but he couldn’t direct his header on target.

RCA for the first time in the match were starting to get some meaningful possession, a good passing move involving Hennis and R Leonard saw the ball played in to Slack, his shot was blocked and fell to Dorward whose shot was cleared for a corner by Vaulks.

As half time approached RCA were awarded a freekick 25 yards out, C Davis took it firing in a low shot which was deflected wide for a corner. From the resulting corner Shildon broke quickly as Moore sent the ball forward to Greulich-Smith who broke into the box and was only denied a goal by a superb save from the advancing Dean.

The corner produced a double save from Dean as first Moore fired in a shot which Dean palmed away only as far as Greulich-Smith who looked like he just had to hit the target to score but Dean somehow managed to fly through the air and turn the effort away for a corner to keep RCA in the game.

In the final minute of the half a strong run down the right by Davis took him to edge of the Shildon penalty area, he played a quick one two with Lawson before firing in a shot which looked destined for the bottom corner of the net only for a Shildon defender to clear off the line with Newbrook beaten.

Although the wind didn’t feel as strong as in the first half it was still strong enough to have an effect on the game.

RCA started the second half well putting pressure on the Shildon defence, R Leonard causing them a problem on the left when he beat his marker and whipped in a cross which Moore was happy to hook clear with Slack inches away from connecting.

Shildon took the lead when a misplaced pass by J Leonard in the centre circle was picked up by Liddle and immediately he released Palmer who didn’t need a second chance as he slotted the ball past Dean.

The visitors looked for an early response and R Leonard and C Davis were leading the way as the two almost produced a stunning response 5 minutes later, J Leonard sprayed a great ball into the path of R Leonard and his cross to the far post was inches away from the boot of C Davis, any touch would surely have ended up in the net.

Within a minute RCA were back on the attack, J Leonard who was growing into this game played a one two with Hennis before playing a weighted pass to C Davis but his shot was deflected into the arms of Newbrook.

The pressure was mounting and Shildon were being forced to defend deep in their half. A niggly foul by Heywood gave RCA a freekick on the left. C Davis fired in a shot which was brilliantly saved by Newbrook, the rebound looping up to Lawson who looked sure to head home but Newbrook somehow managed to instinctively claw the ball away to safety.

Shildon went 2 – 0 up slightly against the run of play when a ball forward fell to Croft who looked in two minds whether the pass to the keeper or clear and lost the ball, deep inside his own the penalty area, to Atkinson who squared the ball to Greulich-Smith who tapped in from 4 yards out.

There was nothing to lose now for the visitors and they pushed forward once again some neat footwork by J Leonard took him past two defenders and his pass to Slack gave the RCA striker a chance but, under pressure from Vaulks, he fired over the bar.

Shildon almost made it three in the final minutes when Greulich-Smith fired in a shot which was cleared off the line by Allen, the ball fell to Liddle whose shot beat Dean but was scrambled away by Hodgson and eventually cleared up by Lawson who sent the ball forward towards Slack.

The home team then saw out the remaining injury time.

This was, despite the wind and the pitch, a very entertaining match.

RCA can count themselves unlucky not to come away with something for their efforts. Two mistakes have, in the end, cost us. However take nothing away from the players who again showed a lot of character and continued to fight to the end.