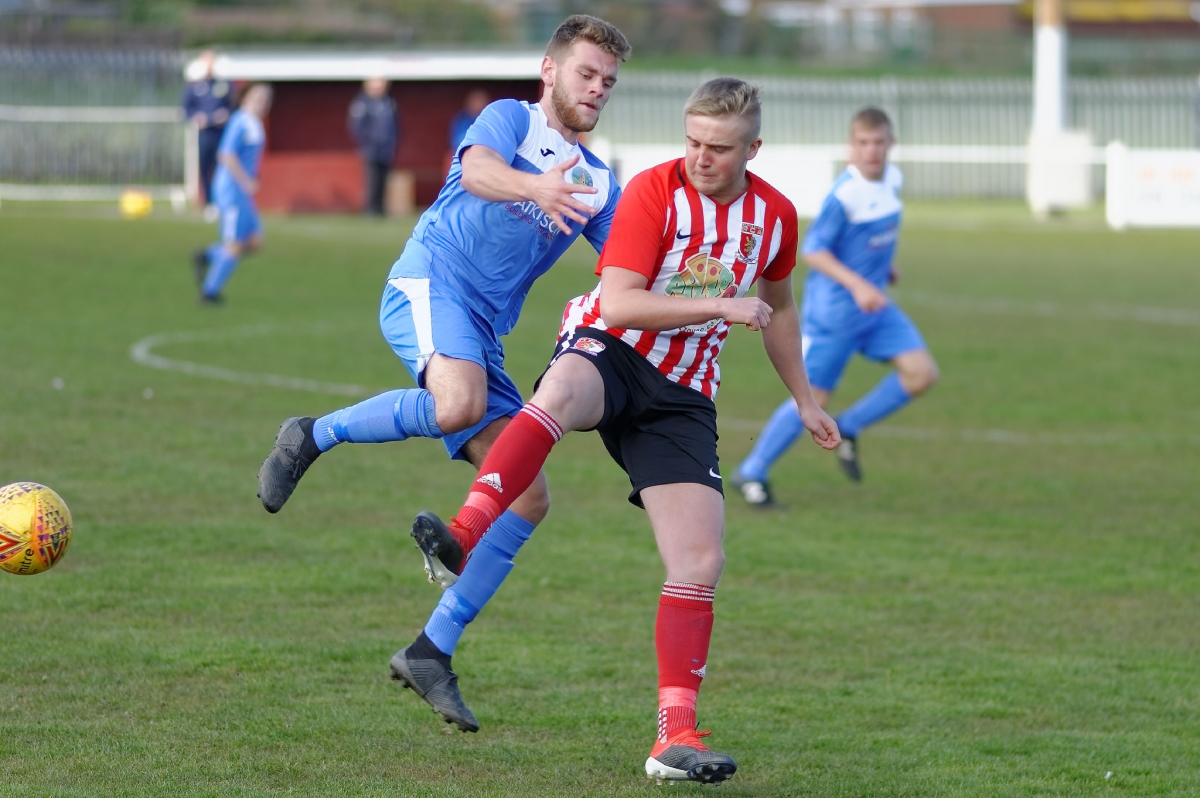 Sunderland RCA entertained bottom club Penrith in this, the last match of the season. Penrith have had a bit of a torrid season but seemed to have turned the corner in the last few months culminating in reaching the Cumberland  Cup final on the 30th April.

The RCA management team were forced into making two changes with both Larkin and K Davis suffering injuries in Tuesday night’s victory against Seaham Red Star. Charlton and Moan replaced the injured pair in the starting line up.

Penrith kicked the game off taking advantage of the slope but kicking into a strong, bitterly cold wild blowing off the North Sea.

The visitors were straight on the attack, forcing a corner in the opening minutes, Holliday’s cross was headed goalwards by Moynan but Patterson managed to punch the ball clear for another corner, the second corned was cleared by Lilley who set up RCA first attack through Charlton but his cross was easily collected by Forrester.

RCA created the next opportunity when Lilley picked out Lavery with a 40 yard pass and the RCA full back took the ball forward before firing a shot wide of the target.

In their next attack the home team took the lead, a ball from Elliott was picked up by Charlton who pulled it back to Lilley who sent in a perfectly measured cross onto the head of Moan who made no mistake from the edge of the six yard area.

The game settled into a midfield battle with RCA just getting the upper hand, a good run by Lavery opened up the Penrith defence before he played in McAloon who shot straight at Forrester.

RCA extended their lead in the 25th minute when Page played a wonderful through ball into the path of O’Neill inside the Penrith penalty area, as he was about to shoot he was pushed in the back by Eleftheriadis and the referee immediately awarded a penalty and dismissed the Penrith player.

In the absence of all our recognized penalty takers Elliott took responsibility for the kick his powerful shot was parried by Forrester but spun into the net with Elliott following up to make sure.

Penrith were forced to re-organised but RCA failed to take advantage of the spare man.

The game was stop start as the game became very scrappy and was interrupted continually by niggly fouls.

It was RCA who finished the half the stronger and in the 45th minute Page picked the ball up inside the centre circle, picked out the run of O’Neill who controlled the ball well before hammering an unstoppable shot into the far corner of the net giving Forrester no chance.

There are cliché in football that get overused and one of them relates to the second half of this match as it was like the preverbial “Alamo” with Penrith encamped in their own half and RCA raining in shot after shot at the visitors goal.

Immediately from the kick off the ball was played forward and O’Neill skipped past two defenders before setting up Page but he scooped his effort over the bar.

A minute later and McAloon was set free on the left wing his cross was met by O’Neill but he sliced his shot wide.

In the 50th minute the quick thinking Lavery took a short corner to Howard who slid the ball into the path of McAloon he rode two tackles before poking in a shot which Forrester saved.

It continued to be one way traffic as Penrith seemed unable to get the ball past the half way line. Howard was the next to test their defence with a searching left wing run, he drove in a cross/shot which found its way to Moan at the far post but he clipped his shot wide of the upright.

RCA should have increased their lead when O’Neill picked up a pass from Preston, took the ball to the by-line before cutting it back to Page who blazed the ball wide of an empty net from 10 yards out.

On the hour mark RCA finally got their fourth goal when McAloon again made a surging run down the left, his cross was partially cleared by Moynan but fell to Charlton inside the six yard area and he blasted it into the net past the helpless dive of Forrester.

Callen replaced McAloon a few minutes later and his first contribution was to pull pick up a Page pass, get to the by-line and cut it back to Lavery who fire wide.

Penrith continued to defend in numbers on the edge of their own box, Moan slipped the offside trap in the 68th minute but mis-hit his shot and Moynan was able to clear, only as far as Callen on the left who forced a corner.

Elliott swung in the corner which Swansbury header towards the bottom corner but Holliday was on hand to clear off the line.

Another Elliott corner two minutes later was headed by Davison and tipped over the bar by Forrester.

The chances for RCA were mounting by the minute, Moan headed wide from a good position and then shot wide when put through on goal by Howard.

RCA finally broke the resistance of Penrith's stubborn defence Callen played the ball inside to O’Neill, he in turn found Page who this time made no mistake in putting the ball into the net.

Into the final ten minutes and Holliday once again cleared the ball off the line, this time from a Davison header.

Whether RCA took their foot off the pedal in the final 5 minutes is anyone's guess but Penrith eventually got some forward momentum. Johnson and Hebson combined with the latter firing in a shot which went well over the bar.

In the last minute a long ball forward from Moynan found M Brown who mis timed his control when through on goal and Patterson was able to clear up at the back.

With the last kick off the match RCA made it 6-0 when Moan smashed the ball into the bottom corner of the net giving Forrester no chance.

The referee blew the whistle on the 2018-19 season, a one which sees us finish in 5th place level on points and goal difference with Consett but having scored fewer goals, one more goal today would have moved us up the table, "Such is life".

Next up for RCA is the Presentation Night on 4th May 2019 at the Penshaw Suite, Nissan Sports Complex, Washington Road, SR5 3NS.( Entrance fee of £5 per person to be paid on the night.)