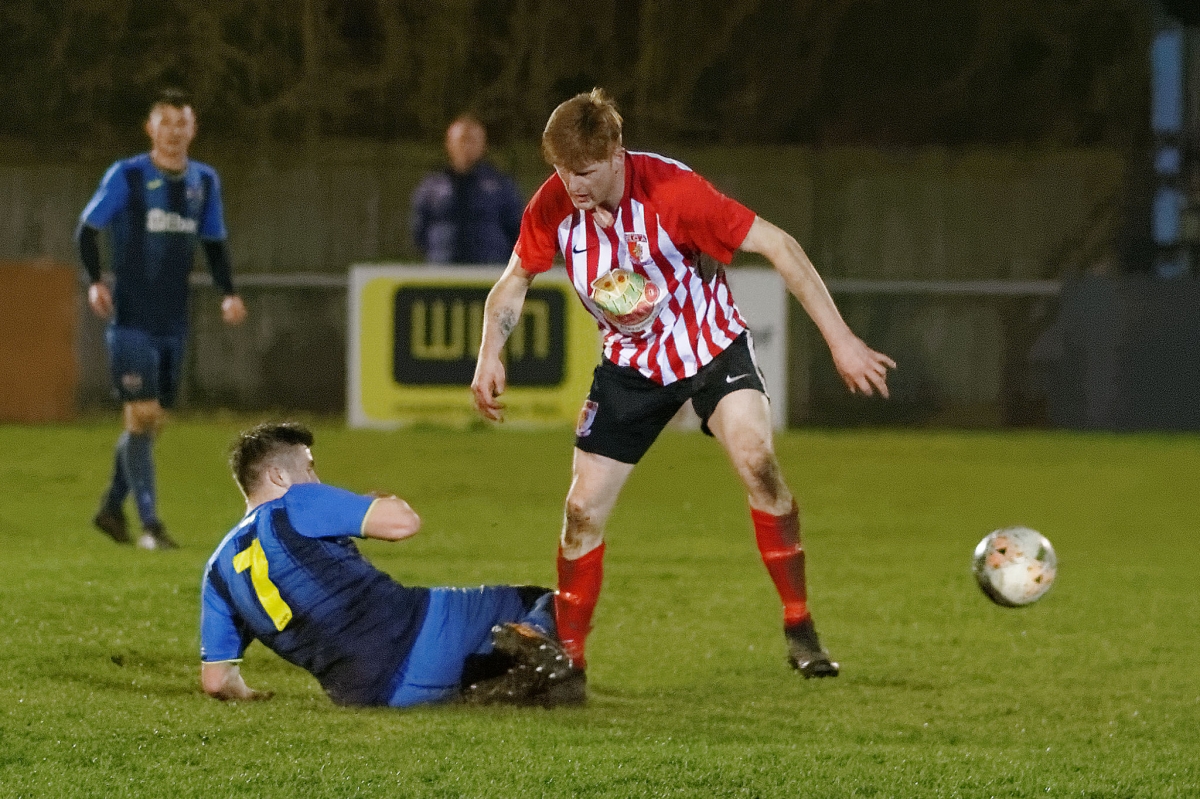 The RCA management team made only one change to the team that beat Bishops on Saturday, O’Neill replacing the injured Davison who failed a late fitness test.

Stephen Callen continued his rehabilitation with an extensive warmed up with the team prior to the match.

The opening exchanges were even with both teams playing through the midfield without really penetrating the oppositions defence.

Poor officials positioning denied RCA the lead in the 9th minute when a cross field ball from Page found Larkin on the left edge of the penalty area, he skipped past a defender before firing in a shot which took a deflection off Pickford in the Aycliffe goal, before going two feet beyond the goal line before being scooped away by Pickford and cleared for a corner. Neither the referee nor the Assistant deemed the ball to have crossed the line and waved play on.

Aycliffe tried to take advantage of their good fortune, Brown spreading the ball out to Wood who raced down the right, his cross was met by Hudson but his effort was well wide of the target.

The visitors took the game to Aycliffe, Hodgson picked up the ball in midfield, fed it to Page and his forward pass was chested down by O’Neill inside the penalty area, as the RCA striker turned to shoot he looked to be pulled back by a defender. The penalty appeal was turned down.

The game ebbed and flowed with both teams showing some good passages of play without creating anything in front of goal.

In a nondescript first half the only real chances were a shot from McAloon which curled well past the far post and a long range free kick by Costello which flew just over the bar.

The second half was a different kettle of fish with Aycliffe starting on the front foot.

A break by Costello was halted by a poor challenge from Hodgson, the resulting freekick was whipped in dangerously by Wood and Preston needed to be at his best to head clear under pressure from Mitton.

Aycliffe kept up the momentum for a few minutes with Brown instrumental in setting Hudson up with a chance but the Aycliffe striker pulled his shot wide.

RCA eventually got going in the second half when they were awarded a free kick on the right, the kick was curled towards goal by Lavery but was deflect wide by the chest of Preston.

The pressure was increased by RCA as they pushed forward looking to break the deadlock, a long ball forward from Lavery found Larkin on the left, his cross into the box was headed away by Mitton but fell to Moan on the edge of the box his half volley went narrowly wide.

The home team responded through Howes who ran onto a through ball from Brown before crossing to Hudson but he mistimed his shot and Pocklington was able to make a comfortable save.

In the 56th minute Lavery took a short corner to McAloon who drifted inside before hitting a low shot which went inches wide of the post.

Once again Aycliffe responded, Harrison sending a pass into the path of Wood who took advantage of some poor marking to slip inside before sending in a shot which Pocklington saved.

The game had definitely come alive now with both teams attacking at every opportunity but being met by some terrific defending.

The next chance fell to Aycliffe when Howes made a surging run down the left before passing inside to Gash who in turn played the ball to Hudson who fired the ball into the side netting from an acute angle.

Two minutes later and a freekick, taken by Pocklington, was headed down by O’Neill into the path of Elliott but his header from 10 yards out was straight at Pickford.

The second controversial incident of the game came in the 67th minute when a long ball forward saw Hudson beat the RCA offside trap, the striker picked up the ball and looked to round the advancing Pocklington who stuck out a leg and tripped the Aycliffe player. Most people in the crowd were astonished when the referee issued a yellow for what looked like a clear goal scoring opportunity. The resulting freekick was fired well over the bar.

RCA were next on the attack with Elliott and Lavery combining to play Larkin in on the left, his cross was met by Page but his effort went wide.

As the game entered the last 10 minutes another long run by Wood was left unchecked by the RCA defence but his shot flew just wide of the upright.

In the 83rd minute a through ball from Hodgson looked to have set O’Neill up but under pressure from Mitton he stabbed his shot straight at Pickford.

Within a minute the ball was back with RCA and a move involving O’Neill and Larkin set substitute Charlton in on goal, but a fantastic challenge by Gavin saw him not only win the ball to prevent a certain goal but control the ball and set up Aycliffe’s next attack.

At the other end two minutes later Matthews beat the RCA offside trap and was clear on goal with only the keeper to beat but Lavery somehow managed to get back to make a terrific tackle and deny the Aycliffe full back.

With the game drifting into injury time and an almost certain draw RCA conjured up a final move, Larkin found the energy to make one final run before crossing into the box where Page fired in a header which struck the post, as luck or fate would have it the ball rebounded back to Page who struck the ball past the bewildered Pickford.

The referee blew for full time a few minutes later to bring a thoroughly entertaining second half to a conclusion.

On the night RCA got three points in a match where the Officials decision making probably evened themselves out over the course of the game.

Hard to take for Newton Aycliffe who played really well and probably deserved something out of the game but RCA march on.

Next up for RCA is Hebburn Town on Saturday.