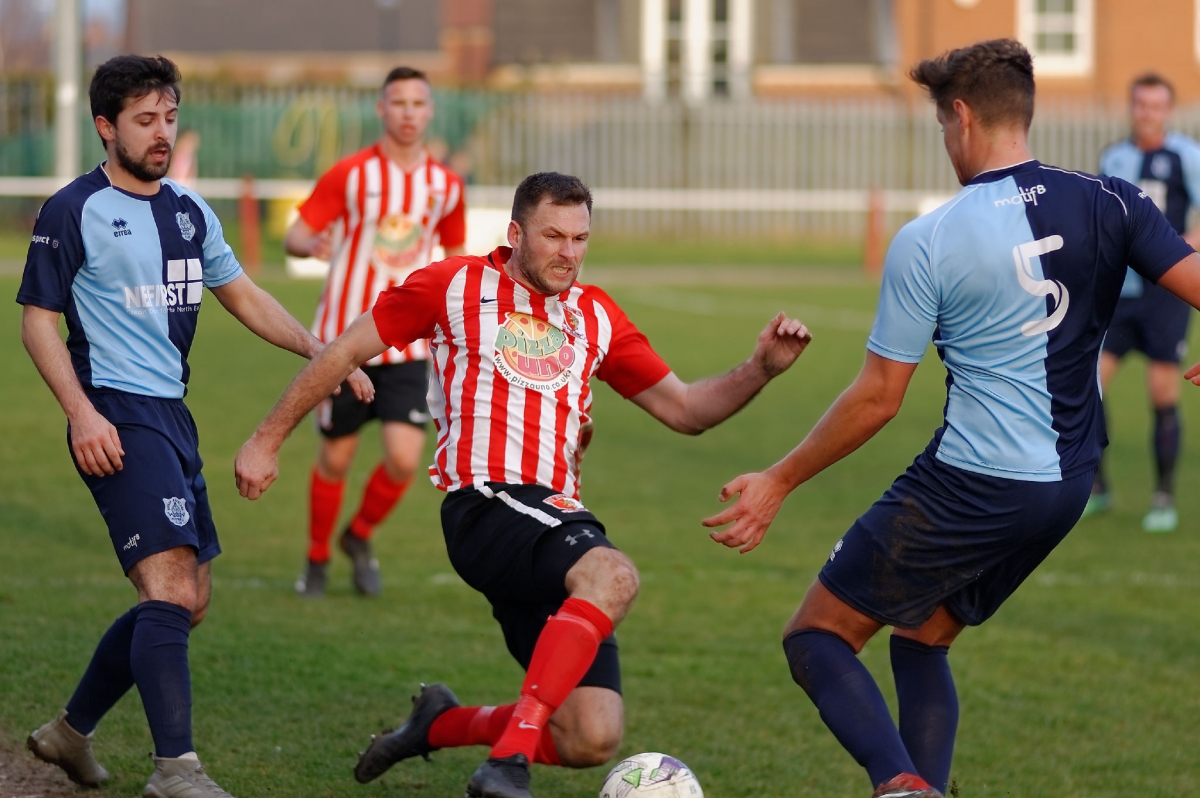 On the Mark: RCA striker Mark Davison scored his 100th goal for the club during the first half of the match.

Peter Jackson's photos from the match are here.

The visitors were undefeated in the league since 6 October, when we beat them 2 -1 at Heritage Park, a phenomenal record and one I am sure that Ian Chandler and his backroom staff are very proud of.

The RCA management team were forced into at least one change from last week’s winning team as the suspension of Kyle Davis started today, also missing was Nathan O’Neill, so into the team came Craig  Hodgson and Thomas McAloon. There was also welcome returns of Dylan Elliott and Ross McNab from long term injuries and they took their place on the bench. The more observant of you will have also noted that Stephen Callen warmed up with the team for the first time since his hernia operations as he continues his rehabilitation.

RCA took advantage of the slope and the wind in the first half and were soon on the attack, the persistence of McAloon saw him dispossess Munro on the edge of the box, but his shot was fired into the side netting.

In the opening period it was the home team who had the majority of the possession and in the 10th minute, after a spell of sustained pressure, they won a corner. The ball was crossed in by Lavery to the edge of the box where Davison connected, but his shot went harmlessly wide.

There was little of the flair or creativity that was expected from Bishop Auckland and the RCA defence seemed to be able to contain any threats fairly comfortably.

In the 19th minute RCA took the lead. Awarded a freekick deep in their own half the kick was sent forward to Larkin who, in acres of space, cut inside before deftly curling the ball round the advancing Liversedge and into the net.

Bishops were forced into a double substitution with both Liversedge and Munro struggling with injuries, their places were taken by Proctor and Staunch. There followed a period of complete domination as RCA poured forward winning a corner in the 22nd minute. Lavery’s kick was not cleared and Page won the ball played it back to Lavery who shot over the bar,

A minute later and the young Proctor was called into action diving to his left to stop a shot from Moan. The keeper then produced the save of the match from the resulting corner, Lavery whipped the ball into the near post where Larkin met it with a glancing header which was destined for the top corner but Proctor managed to get a hand to the ball and it sailed over the bar. The resulting corner was sent to the back post where Preston had time to chest the ball down but sent his volley over the bar.

There was little respite for the Bishop defence as RCA looked to increase their lead and Davison came mighty close in the 27th minute when good build up between Page and McAloon saw the ball passed to Davison inside the box the RCA striker hit a low drive which was scrambled round the post by Proctor.

Davison did not have to wait long to get on the score sheet. In the 30th minute he closed down the Bishops keeper as he tried to make a clearance and the ball struck him on the foot and rebounded from a tight angle into the net. Not a classic goal by any stretch of the imagination, but it was Mark Davison’s 100th goal for RCA and coming in only 149 appearances for the club will be one he might just remember.

McAloon almost made it 3-0 five minutes later when the influential Page won the ball in midfield, played a lovely ball forward for McAloon whose goal bound shot was deflected away for a corner by Galbraith.

In the final ten minutes of the half Bishops managed to get into their stride Gibbons played a ball out wide to Fryatt who slipped the ball to Johnson but the Bishop’s striker blasted the ball well wide. In the 40th minute Johnson picked the ball up 30 yards out and played the ball into the path of Winn but Howard covered across to make a great last ditch tackle, as the Bishops forward went to pull the trigger, clearing the ball for a throw in.

Bishops came out early for the second half and showed their intent in the opening five minutes of the second half as they put RCA‘s defence under pressure, but in their willingness to get forward were being caught in offside positions.

RCA were forced into their first substitution as Lavery limped off to be replaced by Lilley in the 48th minute.

It wasn’t until the hour mark that Bishops eventually tested Pocklington in the second half: Hoganson with a dipping freekick which the RCA keeper did well to tip over the bar. RCA broke from the resulting corner with Page sending a long ball forward for McAloon who slipped past his marker before squaring the ball to Davison but he fired over the bar.

Two minutes later and RCA were on the attack again, Howard slipped the ball through to Davison who in turn crossed towards McAloon, but Proctor did brilliantly to dive at the feet of McAloon and denied a simple tap in.

The home team having weathered the storm were looking to counter attack at every opportunity, a shot from Moan was blocked by Gibbons and the rebound was cleared by Staunch with Davison ready to pounce.

Bishops best chance of the game saw a freekick from Hoganson fall to Staunch at the far post but with the goal at his mercy he volleyed the ball over the bar. Within a minute the ball was played forward by Hodgson and found McAloon one-on-one with Proctor. The Bishops keeper did well to stay on his feet and made a terrific save to keep the score at 2 -0.

RCA brought on some fresh legs replacing McAloon with Charlton and five minutes later Elliott came on for Moan.

In the final five minutes Bishops threw caution to the wind but to no avail as the RCA defence, led by Captain Swansbury, stayed solid and restricted them to one shot on target which was smothered by Pocklington.

This was a thoroughly professional performance from start to finish. Every player playing their part in a commanding win in which we made a very good team look very ordinary.

Next up is the rearranged trip to Newton Aycliffe on Tuesday night.