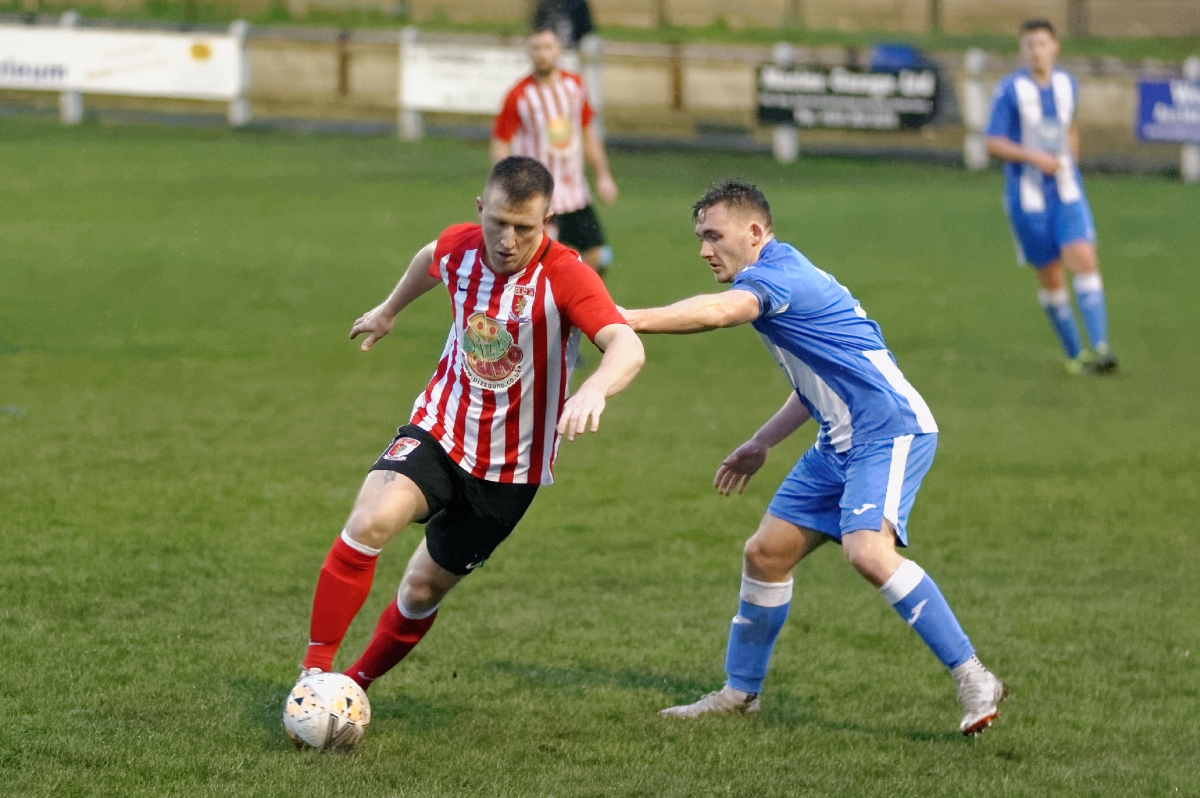 Goal scorer Kyle Davis attacks during the second half of the match.

Sunderland RCA travelled to Hillheads for this Ebac Northern League encounter with Whitley Bay. RCA made two changes to the team that played in the Durham Challenge Cup against South Shields on Tuesday, Lavery and Moan replacing McAloon and Hodgson.
The teams lined up as follows:

Prior to the start of the match there was a minute's applause held in honour of Whitley Bay and North Shields legend Robbie Livermore.

Whitley Bay started the brighter, passing the ball about without really penetrating the RCA defence.

Having weathered the initial opening storm RCA got into their stride, K Davis on the right cutting in before seeing his shot blocked. From the rebound Whitley Bay counter attacked through Ardelean, unfortunately, his through ball to Wright caught the striker offside.

RCA’s first real attempt on goal came in the 11th minute when Lavery made a searching run through the heart of the Bay defence, but his final shot flew over the bar.

This signaled the start of sustained RCA pressure with the Whitley Bay defence happy to punt the ball forward and due to this stout defending it wasn’t until the 22nd minute that RCA created their next chance.

Preston played the ball to Page who spotted the run of Larkin into the box, his pass was inch perfect but as Larkin tried to round Logan the young keeper managed to dive and smother the ball, preventing Larkin from shooting.

RCA continued to press and restricted the home team to the occasional counter attack.

On the half hour mark RCA thought they had taken the lead when they had the ball in the net after Davison set up O’Neill, his shot struck a defender on the way into the net, but the flag was up for offside.

Whitley Bay had Logan to thank again fivd minutes later when he came to their rescue again, this time saving a goal bound shot from K Davis with his foot, deflecting it onto the post and out for a corner.

With the home team largely ineffective in the first half it was left to the visitors to try and conjure something up in the final five minutes of a largely disappointing half of football.

Lavery made another of his surging runs on the left but dragged his shot wide when in a good position, then in the dying seconds Lavery broke down the left before sending in a great cross which was met by O’Neill but although his header beat Logan it struck the post and rebounded to safety

0-0 at half time, would RCA rue their missed chances in the first half.

The second half kicked off as the rain came down making the playing conditions a lot more difficult.

RCA were forced to concede a corner when Wright broke down the right. The corner was sent into the box where it is flicked onto the crossbar, the rebound landed at the feet of Ardelean who stabbed it home at the far post. Totally against the run of play Whitley Bay led.

The lead lasted all of 90 seconds as RCA from the kick off played the ball forward, a through ball from Page found Davison inside the area his shot was saved by Logan but the rebound came back to Davison; this time he played the ball to K Davis who made no mistake from 10 yards out, driving the ball low into the net.

Within minutes RCA should have taken the lead a good passage of play saw Moan win the ball in the centre circle before playing it to Larkin who slipped the ball across to K Davis but his powerful shot was well blocked by Logan.

With RCA pressing for the winner they were leaving gaps at the back and Whitley Bay totally exploited this in the 63rd minute when an RCA attack was broken up and a long ball forward from McFarlane was played into space by Wright. Glen-Ravenhill picked up the ball 25 yards out, advanced to the edge of the area before curling a delightful shot past Pocklington and into the top corner.

The visitors continued to make the running but now were looking for a equaliser, for the most part their build up was good but the final pass was letting them down.

In the 73rd minute RCA were back on level terms, another searching pass from Page found Larkin in space. He looked up and squared the ball to Davison inside the six yard area and the RCA striker had the simplest of tap ins.

It was all hands to the pump as the home team defended in numbers in the final 10 minutes, RCA thought that they had won it in the 88th minute when a deep cross from K Davis was met at the back post by Page, but he directed his header into the side netting.

A minute later and another flowing RCA move started by Swansbury saw the ball crossed into the  box by McAloon, the ball was met by Swansbury but his header was somehow cleared off the line by McFarlane.

Deep into injury time RCA struck the killer blow. McAloon picked up a pass from Moan, drifted past his marker before clipping an inviting ball into the box where Larkin was on hand to head the ball past the despairing dive of Logan to give RCA the lead for the first time in the match and securing all three points.